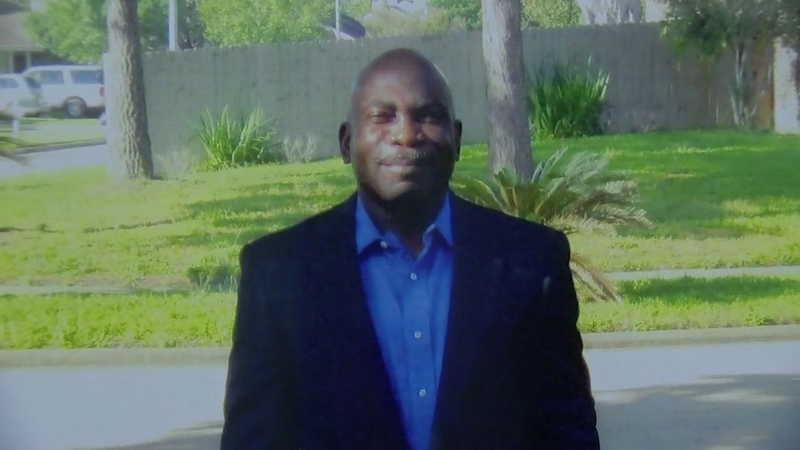 HOUSTON, Texas (KTRK) -- For the first time since his death, the family of an armored guard killed during a bank robbery is publicly asking for help finding his killers.

Police say 60-year-old Brinks guard Alvin Kinney was murdered by three men who ambushed him as he was loading money into the back of an armored vehicle.

The armed assailants approached Kinney and opened fire wearing body armor and face-shield masks during the crime, which happened in front of a Capitol One bank in the 5700 block of Westheimer on Feb. 12, 2015.

During the incident, a second Brinks guard returned fire as the suspects backed up a stolen truck and stole several bags of cash.

There have not been any arrests made in the three years since his murder.

The widow of Alvin Kinney says she and her family just want justice for him and that he didn't deserve to be killed.

On Wednesday, Kinney's widow Rosalind spoke to the media, urging anyone with information to come forward.

"It's been a long three years, and no one can ever fill the void for Alvin. We loved him and he loved us, and he didn't deserve that day," she said.

Rosalind said that her husband had worked his job with Brinks for 20 years and there were no incidents prior to his murder.

She also explained that she and Alvin had been married for 27 years. Their son Brett was 19 when Alvin was killed and was just starting his first year of college.

"It kind of took us off track, but life is for living, and we're living it everyday. But there's not a day goes by that we don't think about Alvin," Rosalind said.

The family of Alvin Kinney says there's not a day that goes by that they don't think about him.

Crime Stoppers announced Wednesday that they were increasing the reward to $105,000 from $100,000 for information leading to the arrest or charges of the gunmen responsible for the killing.

Authorities also revealed that the suspects wanted in this investigation are linked to two other cases.

The first incident occurred in February 2014 in the parking lot of a Wells Fargo on 9900 Almeda Genoa. The suspects shot one of the guards who survived.

A stolen white F-250 Ford pickup truck was used in the crime.

In the second incident just a few months later in July of that year, another robbery occurred, this time at Capitol One on 8500 South Main. A stolen Ford pickup truck was also used.

Officials believe this is the same truck involved in the robbery and murder of Kinney in 2015. It's believed the suspects got away with cash in the previous two incidents as well.

A composite sketch of one of the suspects was released a month after Kinney's murder three years ago.

The same sketch and a photo of the truck were posted during the press conference Wednesday.

Kinney's family, the Houston Police Department's Homicide Division and FBI Houston again urged anyone with information to contact authorities at 1-800-CALL-FBI or Crime Stoppers at 713-222-TIPS.

"I hesitated about even talking and coming before the media, but it's time for us to know what happened to Alvin because he mattered," Rosalind said. "We were a happy family, we were a unit and we lost our foundation the day we lost Alvin."