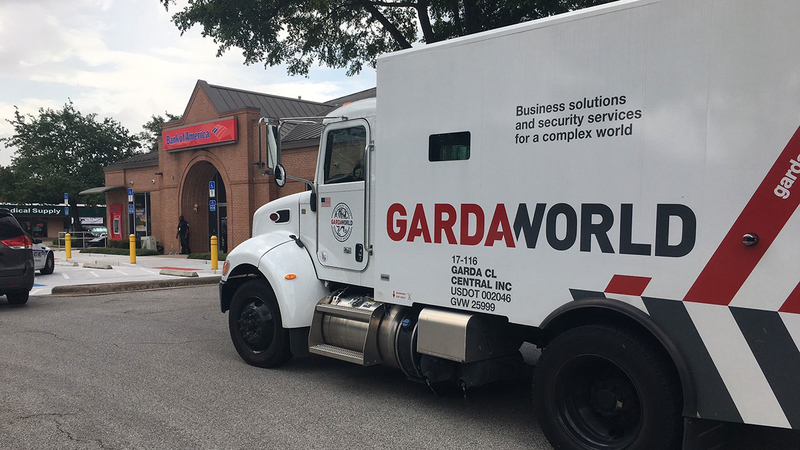 WEST UNIVERSITY PLACE, Texas (KTRK) -- The FBI released dramatic pictures of two wanted armored car robbers. The men are believed to have robbed a Garda World armored car employee as he was transferring money to a Bank of America branch in West University Place. The brazen robbery occurred just after 9:30 this morning.

In the images, one man is seen wearing a mask and holding a handgun. The other man is wearing camo and also holding a weapon. Both are believed to have driven away in the same grey SUV.

"I was just sitting there at the desk, and I heard a funny horn sound," said Bradley Jackson, who works at a medical supply store across the street.

Jackson soon realized the sound he heard were the robbers getting away. Moments later, a man using the Bank of America ATM when the robbery took place rushed into his store.

"I had him on the phone call 911; I locked our doors and got our office girls back in the back room, where there were no windows," Jackson said.

Within minutes, police from several jurisdictions descended upon the bank parking lot and surrounding areas, with guns drawn. Employees at a nearby lighting store reacted quickly.

"I immediately got my keys and I locked the store," said store employee Lisa Kantoff. "I peer out and I don't know what I'm looking for but there are many police cars and lights, and I see officers getting out of their cars, with guns loaded and ready to hunt someone down."

The robbers were last seen driving west along Bellaire in a grey SUV. Police say they managed to get away with a bank money bag.