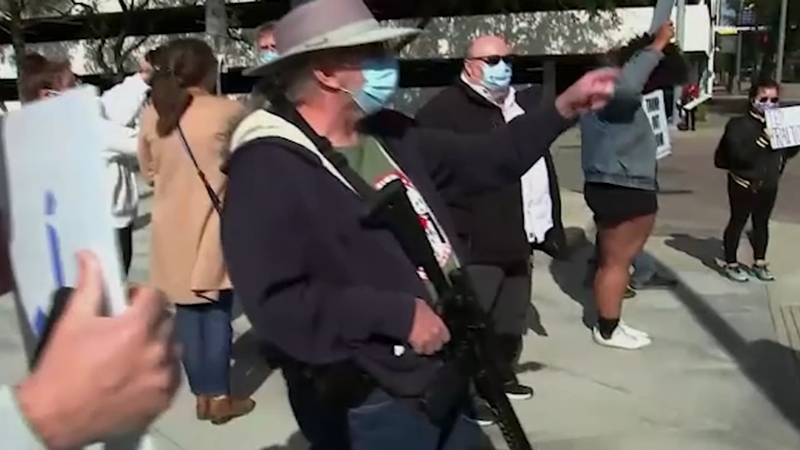 About a dozen activists stood in front of the Leland Federal Building on Smith Street calling out President Donald Trump for his response to the riots and protests. Several demonstrators were seen armed, calling it "self-defense."


"We've seen in the last five years how Trump has mobilized all sorts of factious [supporters] ... they come out in Houston from time to time armed and dangerous, we're here to basically defend ourselves," said Dr. David Michael Smith, one of the organizers and member of Houston United Front Against Fascism.

One woman was fatally shot by police during the storming of the Capitol, and authorities said three others died of medical conditions.

President Trump, for the first time, acknowledged his defeat in the Nov. 3 election and announced there would be an "orderly transition on January 20th" after Congress concluded the electoral vote count early Thursday certifying President-elect Joe Biden's victory.

Statement by President Donald J. Trump on the Electoral Certification:

“Even though I totally disagree with the outcome of the election, and the facts bear me out, nevertheless there will be an orderly transition on January 20th. I have always said we would continue our...

Trump on Wednesday had encouraged his supporters to march on the Capitol to protest lawmakers' actions, and later appeared to excuse the violent occupation of the Capitol by the mob, which forced its way inside, clashed with police and ransacked offices.

"These are the things and events that happen when a sacred landslide election victory is so unceremoniously & viciously stripped away from great patriots who have been badly & unfairly treated for so long," Trump wrote in a message that was later deleted by Twitter. He added, "Go home with love & in peace. Remember this day forever!"

READ MORE: President Trump says his term is ending, transition will be orderly