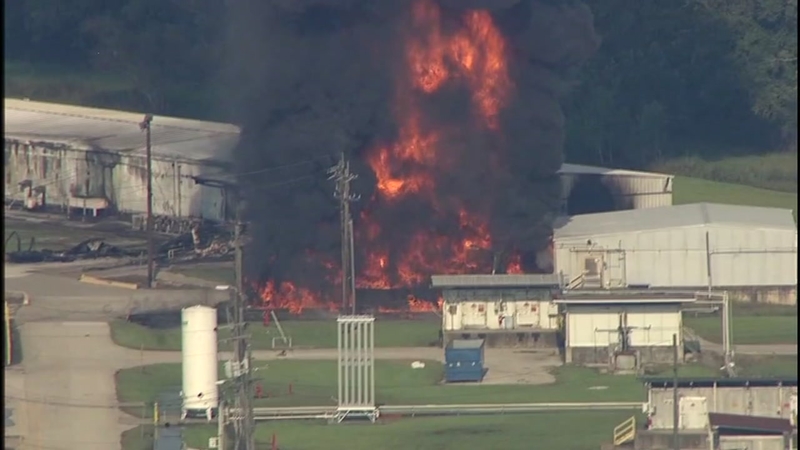 CROSBY, Texas (KTRK) -- Danger persists at the Arkema chemical plant in Crosby Saturday as government source tells ABC News that Arkema expects the remaining containers to combust, resulting in possibly the biggest fire at the facility to date.

SkyEye flew over the volatile scene where it's only a matter of time before six more containers burn at the Arkema plant. A resident said 126 evacuated families have stayed in touch with one another through Facebook.

Monica Sanchez evacuated with her family on Tuesday.

"I live a mile from the plant and from day one no information, just get out," Sanchez said.

On Friday, two containers burned at once, sending thick black smoke and carbon particles high into the air. Residents have grown weary after abruptly evacuating from their homes, having no idea it would be this long.

RELATED: Plant officials refuse to release plant chemical inventories, admit plans weren't good enough
"I have livestock, cows that need our attention and we can't do anything. The flood hit my house and I haven't been able to see the damages caused in my home. Whatever I would have been able to salvage is gone now," said Sanchez.

Six remaining chemical containers at a flooded Crosby plant could explode at any moment.

Fire experts are letting the organic peroxides burn themselves out, saying it's the safest situation for the materials usually stored at low temperatures. Refrigeration units went out when the plant flooded, causing a dangerous situation and a frustrating one for residents as they wait to go home.

"At least we can start the process of trying to clean up whatever damage has been done. Just want it to be over with at this point," added Sanchez.

LISTEN TO THE FULL FRIDAY PHONE CONFERENCE WITH ARKEMA OFFICIALS