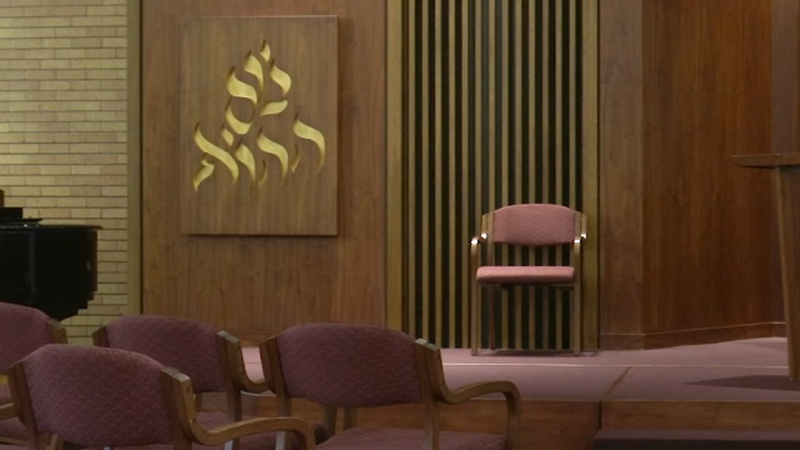 HOUSTON, Texas (KTRK) -- While all of the victims involved in Saturday's hostage incident at a Colleyville synagogue made it out alive and unharmed, data shows that the number of attacks against members of the Jewish community will likely continue to increase in the U.S.

The alarming trends renew safety concerns for rabbis of congregations in Houston who have invested a significant amount of money for security plans.

"I felt a great deal of fear, anxiety, and concern for my friend, Rabbi Cytron-Walker in Colleyville over the weekend, the people he serves, and the members of that congregation," said Rabbi Oren Hayon of Congregation Emanu El. "But none of us were taken by surprise by the fact that someone wanted to do us harm."

"I remember when I began as a rabbi 30 years ago, the door of a large synagogue was wide open. Anybody could enter and come down the hall and make a request and get some support. Today, we live behind closed doors and gates with security guards and cameras. It is not the way we want to be," said Rabbi David Lyon of Congregation Beth Israel in Houston.

Ruth Steinfeld, a Houston resident, escaped and survived the Holocaust 77 years ago. She said it devastates her to still see the magnitude of hate toward the Jewish community.

"My first thought when I heard about what was happening in Colleyville is, 'Oh my God. Not again.' Why is there so much hate? So much antisemitism? Why is there no understanding that Jews are just like other people?" Steinfeld said. "It reminds me of when I was seven and taken to a concentration camp. It feels like it's just happening again."

Anti-Defamation League (ADL) Southwest recorded 11 total incidents of antisemitism in their region last year and said so far this year, they've already had six reports. Their area extends from El Paso on the west end of Texas to Beaumont on the east end, and all points south. Major cities in the region include Houston, San Antonio, Corpus Christi, El Paso, and Beaumont.

Their latest national report shows 2,024 hate crimes against Jews in 2020 throughout the country, which is the third highest on record since 1979. Since 2016, Jews have been the targets of at least 21 extremist plots or credible threats, two of which occurred in Texas (Colleyville in January 2022 and Harlingen in June 2019). Although Jews account for 2% of the national population, experts said they make up about 60% of religion-based crimes.

"We saw a rise during the conflict with Israel and Gaza this past year during May and June, when anti-Semitic incidents went through the roof. We've also seen a dramatic increase in white supremacist propaganda," said Mark Toubin, regional director of Anti-Defamation League Southwest. "The last three years, we are seeing numbers that are as high as any that we've seen in this country, unfortunately. It's something we think even this year, we will probably see an even higher number if the rates continue. Our polls and data show that the anxiety amongst the Jewish community is at an all-time high."

That's why Rabbi Lyon said they invested in the necessary security measures to keep their staff, volunteers and congregation safe, prepared, and at ease.

"We take lessons with HPD and others to help us understand what we can do, what we can say, and very often where we can go in our house of worship if there is a lockdown procedure. We also welcome them to do their tactical training in our building," said Rabbi Lyon. "I would admit that I think they know my building better than I do. But we all have places to go if the button is pushed or the alarm is sounded."

Even though the costs come with a big price tag, the rabbis said there's no price you can put on someone's life, so the amount is well worth it.

"The expenses are crippling congregations, whether it's a large or small one. The part of the budget that ought to be going to sacred deeds and helpfulness in the community is now being prioritized as security," said Rabbi Lyon.

"We dedicate an enormous proportion of our annual budget to safety and security. I certainly think that our neighbors at churches down the street may not realize that we are annually committing sums well into the six-figure numbers," said Rabbi Hayon.

So why are Jews consistently the most targeted religious community in the U.S.? Toubin said there's several possibilities and explanations.

"There are anti-Semitic tropes that go back literally centuries and they are often rehashed and repurposed time and time again. The difference now is that we have social media and this online presence, which takes these unfounded conspiracies and repeatedly pushes them out to people who are not receiving information to counter them," he said.

Toubin also said the ADL gathers its data from direct reports to its organization, the FBI's hate crime statistics, and incidents reported through the media. As alarming as the numbers are, he said the data is likely an undercount of the actual amount of incidents.

"The biggest reason has to do with reporting. Only about 20% of law enforcement agencies have actually reported their numbers to the FBI. Therefore, we don't really have a strong idea of how many hate crimes are actually being committed. Fortunately, a new law, Jabara-Heyer NO HATE Act, was passed within the past year, which will hopefully rectify this number of reporting," he said.

Another reason Toubin stated for underreporting may be due to the amount of attacks that take place online, which can be harder to track and investigate.

Steinfeld said what worries her the most is the future of her loved ones. She hopes one day they won't have to fear for their safety simply because of who they are.

"I have 11 grandchildren and eight great grandchildren. I want them to be safe," she said. "I don't ever want them to ever go through what my sister and I went through. I hope that people will realize that Jews are the same as they are, just a different religion."

What can we all do to help combat hate? Toubin said it starts with calling out harmful rhetoric.

"Every person has a role to play. We can't let hateful rhetoric go without calling it out, whether it's a joke based on a terrible stereotype or a conspiracy theory," he said. "Our elected officials should call it out and not use people's hate to push their own political agendas."

Rabbi Lyon said he doesn't want the members of his congregation to live in fear, sharing that he's heard stories about certain individuals who have refrained from wearing self-identifying markers or clothing. He acknowledges their history of being targets of oppression, but reminds them of their strength and resilience.

"This is a country and a community that wants to look out for the safety and well-being of religion, ethnic, and racial minorities. I want us to not lose sight of the fact that to be a Jew in America, is an enormous privilege," he said. "Relatively speaking, it is an incredibly secure time and place to be a Jew in America. It's not a century ago. It is not the second World War. It's not the Crusades or the Inquisition."