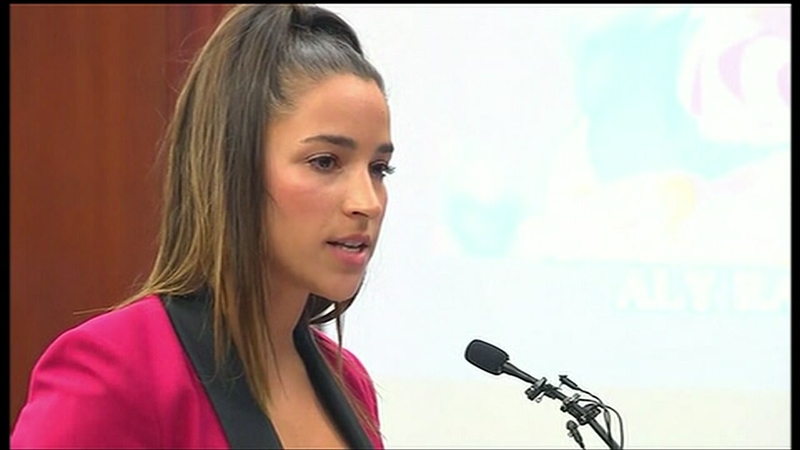 LANSING, Michigan (KTRK) -- Olympic gold medalist Aly Raisman says a sports doctor who sexually assaulted her is "sick" and that she's incomprehensibly angry that he manipulated an "innocent child" to pleasure himself.

Raisman delivered a victim impact statement in a Lansing, Michigan, courtroom Friday - on the fourth day of a sentencing hearing for Larry Nassar during which some 120 girls and women are expected to testify.

Raisman told Nassar he will sit in prison suffering and replaying the words delivered by a "powerful army of survivors." She says she still loves gymnastics and adds that if just one adult had listened to children over the past 30 years, "this tragedy could have been avoided."

The eight-member board of trustees sent a letter to Bill Schuette Friday. Outside calls have grown for university president Lou Anna Simon to resign or be fired as victims of Nassar give impact statements at his sentencing this week. The board also will hold an unscheduled, closed-door meeting Friday.

The board says only a review by Schuette can resolve questions in a way "that the victims, their families, and the public will deem satisfactory and that will help all those affected by Nassar's horrible crimes to heal."

The board says reviews by campus police, the FBI and the U.S. attorney's office have not resulted in criminal charges against anyone at the university other than Nassar, who was fired in September 2016.