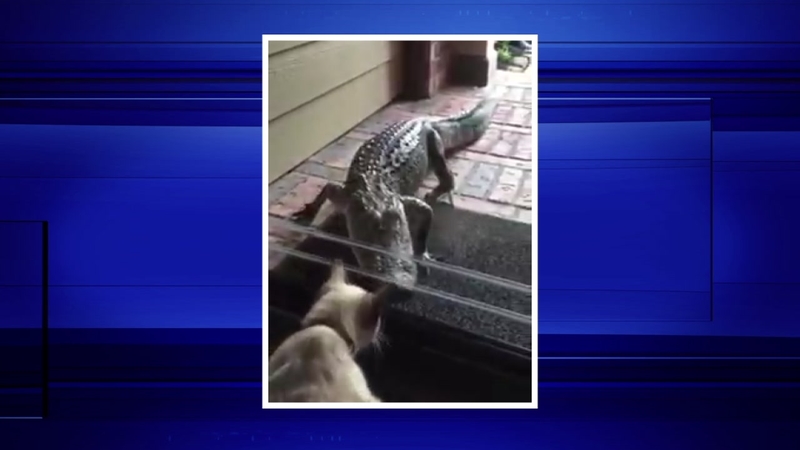 Gator walks up to cat on front door

HOUSTON (KTRK) -- Seeing a gator up close was a first for Allison Tonkin, so she captured the moment on her cell.

It all started when her mother's neighbor heard scratching on their door.

"They looked outside they saw it was an alligator and I guess they kind of tracked it," she said.

This would keep us inside, too!

It then stopped near their bush and stood still for quite some time, staring at a neighborhood cat.

"For a minute we thought we'd be saying goodbye to a kitty," she said jokingly.

Then it noticed Lola, who was inside the house on the other side of the glass door at the time.

"It was funny to see the cat's reaction to it," she said.

Eventually, a gator catcher and a local sheriff deputy arrived for the big catch.

"Apparently it's sort of an issue," said Tonkin.

On the same day, 2 more gators were caught nearby. A 10-foot gator was caught near a tree farm in Needville and the third, which was 6 1/2 feet, was caught at the Richmond YMCA.

Richmond police said it's because of the recent flooding that these animals are getting displaced.

"We are next to the Brazos [River and] my house is two doors down [from] an easement," said Tonkin.