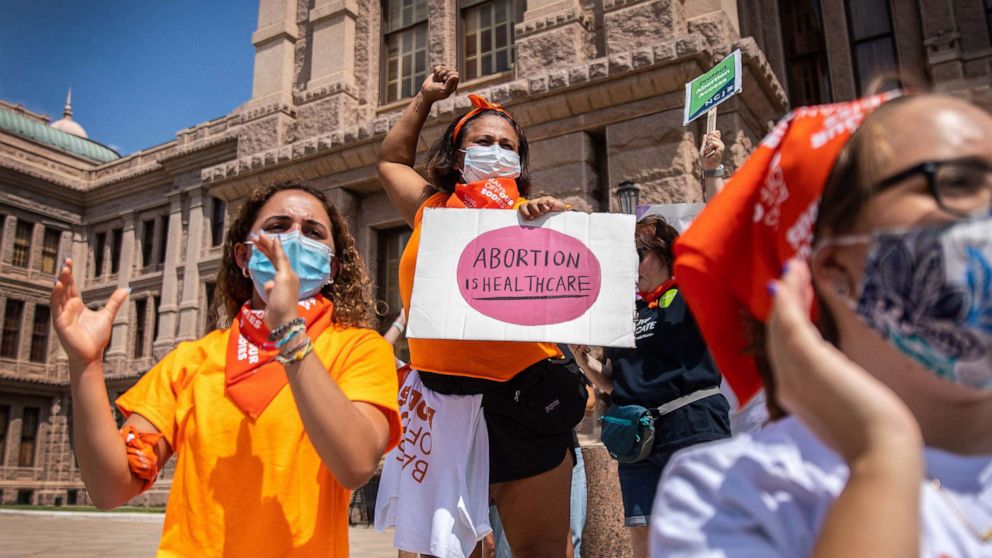 Reproductive rights are taking center stage in California's recall election, in a bid to nationalize the stakes of next week's special election.

Last week, Texas passed the strictest anti-abortion legislation in the nation, effectively nulling Roe v. Wade. The law blocks abortions if a fetal heartbeat can be detected, which can happen as early as six weeks into a pregnancy. It also empowers whistleblowers to report and sue anyone aiding an abortion, including doctors and Uber drivers who may have no knowledge of the situation.

Much of the discourse from candidates over the course of this campaign cycle has focused on COVID-19, homelessness and climate change. Though Republican challengers have offered dramatically different approaches to handling these crises, their responses haven't energized voters as much as Democrats had hoped.

Now, following Texas' abortion ban, Democrats are turning their focus to the issue, sending a stark warning to voters: California could be next if Gov. Gavin Newsom loses.

"The fight that's going on nationally, has come to California," Massachusetts Sen. Elizabeth Warren said in an exclusive interview with ABC News' Zohreen Shah during a campaign stop with Newsom. "That's why this is the moment to vote no on the recall."

Newsom added, "Imagine the judges a Republican governor will appoint. Imagine the ability to use the line item veto to cut expansions of reproductive rights and health care for women. Imagine a governor from the state of California joining Republican governors on amicus brief supporting overturning Roe v. Wade or using the bully pulpit nationally to advance that cause I think it could be profoundly consequential."

A reality check on California politics might prove otherwise, though. California has some of the strongest abortion protections in the nation, so if Newsom were to be recalled, his successor would face a variety of obstacles trying to enact a major consequential anti-abortion legislation. Notably, the legislation would have to go up against a heavy Democratic majority in the state legislature and the governor would only have until the end of the term in 2022 to do it.

However, that has not stopped some Republican candidates from taking stances about stripping funding from health services that provide abortions and trying to overturn Roe v. Wade.

Republican frontrunner and conservative radio host Larry Elder called Roe v. Wade "one of the worst decisions that the Supreme Court ever handed down" in an interview with San Francisco radio station KQED in July.

Anti-abortion activist Lila Rose threw her support behind Elder in a series of tweets last week. She said, in part, that the Elder campaign promised to use line-item veto to cut all abortion funding and veto all abortion expansions.

During an appearance on CNN's "New Day" this week, former Olympian and TV personality Caitlyn Jenner said she supports Texas' decision because she believes states should have the ability to make their own laws -- but she still thinks women should have the right to choose whether or not to give birth.

As it relates to California, Jenner said, "I don't see any changes in our laws in California in the future."

Others, aware of California's political landscape, are calling out Newsom's alleged strategy of using the issue of abortion to vilify his Republican opponents.

"It's not that big of an issue in California because California, you know, has constitutional protection," businessman John Cox told ABC News. "So the politicians are using it. Mr. Newsom is using it to scare people right now."

Some Republicans, like former San Diego Mayor Kevin Faulconer, have complicated Newsom's alleged efforts to try to paint his Republican challengers as anti-abortion. Faulconer told ABC News, "I've been pro-choice ... I've always been and I will continue to be that way."

While the effectiveness of Newsom's strategy will play out at the ballot box on Sept. 14, one thing is for certain: The fight for access to reproductive rights is far from over. Each party appears determined to use the controversial issue to energize their base as the 2022 midterms quickly approach.