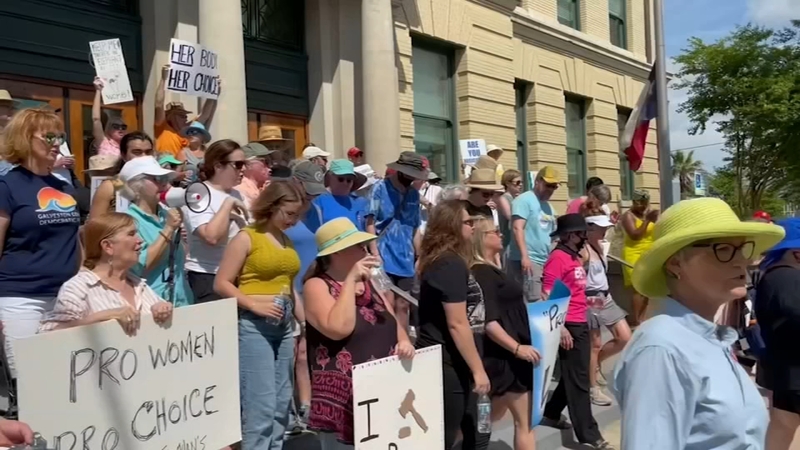 In Texas, thousands more showed up to support the 'Band Off Our Bodies' rallies in Dallas, Austin, Galveston and downtown Houston. The pro-choice rallies are happening in anticipation that the Supreme Court's final decision on abortion may possibly be announced on Monday.

A draft opinion from the Supreme Court was leaked earlier this month, suggesting an overturn of Roe V. Wade which would lead to a country-wide overhaul of abortion rights, pushing the decision back to the states.

"With that political leak, we are expecting that to go through. We are expecting Roe v. Wade to be overturned unfortunately so now we're putting it on the politicians it's time for y'all to do more," said Imari Reynolds, a member of a grassroots group, Social Justice Solutions, that is dedicated to the empowerment of Black people and protection of Black women.

Counter-demonstrators were also present at both of the rallies this Saturday.

Amy O'Donnell with Texas Alliance for Life says members with the organization have been present at similar rallies from the Texas capitol to Washington D.C. O'Donnell said the organization has also been preparing in the event that the Supreme Court final decision is announced in the coming weeks.

"That could happen as early as Monday," O'Donnell said, "It could happen as late as the end of June and so we recognize we are waiting on a week to week basis but we're cautiously optimistic."

Reynolds said pro-choice demonstrators also plan to continue to rally when and if the final decision is published.

"The support of the community that came out today was fantastic," said Kyle Button, a pro-choice rally participant. "There needs to be more people more men that come out and support cause we get to do whatever we want to do with our bodies, women should be able to as well."