By STACY FERNÁNDEZ, The Texas Tribune 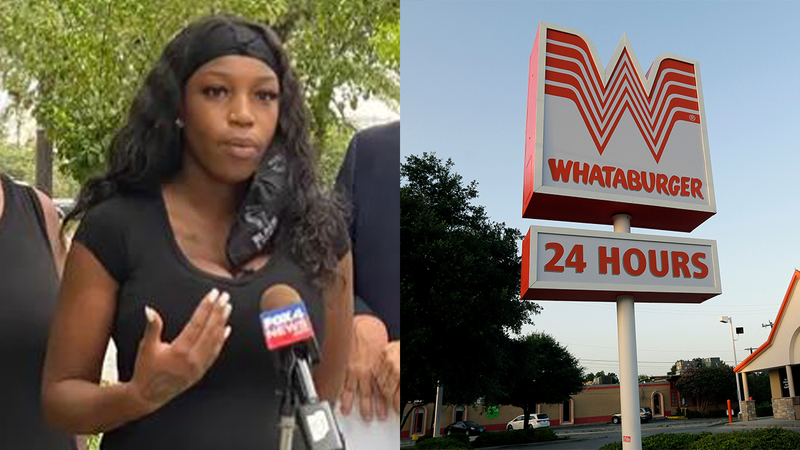 FORT WORTH, Texas -- A Texas woman says she was fired by a Whataburger in Fort Worth for wearing a Black Lives Matter face mask to work, in what is the latest in a string of penalties handed down by employers for public displays of support for the social justice movement.

Similar cases are popping up across the state and all over the country. Over the summer, two Texas teachers faced disciplinary action from their schools, one for wearing a mask and the other for displaying a Black Lives Matter sign, among other signs, in her virtual classroom.

Meanwhile in Ohio, a Taco Bell worker was fired for refusing to take off his Black Lives Matter mask; the same happened to a convenience store worker in New Jersey. And Whole Foods is being sued by 15 employees across six stores, who are accusing the Amazon-owned grocery store of firing one employee and disciplining 40 others for wearing the masks and pins at work.

"What we're seeing with a lot of employees, particularly during this time, is the desire to have their place of employment reflect their values," said Andre Segura, legal director of the American Civil Liberties Union of Texas.

The incidents come as people across the country continue to protest police brutality against Black people in the wake of the deaths of George Floyd and Breonna Taylor, who were both killed by police officers.

Ma'kiya Congious, 19, lost her job at the fast-food chain shortly after her supervisor told her to remove her Black Lives Matter mask when a white customer complained, her attorney Jason Smith said. Smith said Congious had worn the same mask to work in front of several of her managers without consequence.

Whataburger's uniform policy, which extends to face masks, does not allow "non-Whataburger messaging," like that related to politics, religion or sports.

"If we allow any non-Whataburger slogans as part of our uniforms, we have to allow all slogans," a Whataburger representative said in a statement.

But Congious says she didn't resign.

"Whataburger wants you to wear a mask that has no opinions whatsoever on them, all right? I mean, you're entitled to your personal opinions, and that's fine. But at Whataburger we don't want to portray them because ... some people may be offended," a supervisor said in a conversation taped by Congious and provided to The Texas Tribune.

"Whataburger doesn't want to get into anything political because we're just hamburgers and fries," the person on the recording continued.

Amid the heated discussion, Congious asked about putting in her two weeks' notice and was told that she no longer worked there. Congious later said she hadn't yet decided whether to quit but was effectively forced out of the job. When she remained in the store, her supervisors called the police, and five police cars showed up. Congious was not arrested, and no charges were filed against her.

Congious filed a discrimination complaint last month with the Texas Workforce Commission. In the complaint, Congious said she was let go by the fast-food restaurant because of her race and for having the words "Black Lives Matter" on her mask.

In the complaint, Congious pointed out that colleagues also wore face masks other than the ones provided by the company. One featured the Mexican flag, another the Gucci logo.

In a Wednesday press release, Congious called for the company to let employees wear masks stating "Black Lives Matter" and to provide implicit bias training for all managers.

"I wish I could be shocked, but the reality is that anti-Blackness is at every level of our lives. The firing of this woman for a BLM mask illustrates the hypocrisy of franchise owners who are quick to support anti-Black, anti-LGBT and anti-woman causes ... on the basis of bigoted religious beliefs. I hope she sues," Ashton P. Woods, founder of the Houston chapter of Black Lives Matter, said in a statement.

Whataburger is not legally allowed to discriminate against people based on identity markers like race, gender or sexuality, Segura said.

In San Antonio, art teacher Lillian White was fired from the Great Hearts Western Hills charter school about a week before classes were set to begin, reported KENS 5, the local CBS news station.

Over the summer, White wore homemade masks with the words "Black Lives Matter" and "Silence is Violence" to in-person training sessions at the school. She even made a few for teachers who asked her if she had extra. But at one point in the summer, the school's assistant principal texted her to say the school wanted her to stop wearing the masks because "parents will be coming around more and we don't discuss the current political climate."

White continued to wear the masks.

"This is human rights and it should be something that is promoted at our school. It's an excuse to not talk about it by saying this is politics, talk about it on your own time. It's just an excuse because they're uncomfortable with the conversation," White told KENS 5.

Great Hearts Texas said it is a violation of its policy for face coverings to have an external message. Superintendent Daniel Scoggin added in a statement to the news station that the schools stand "with the Black community and all who are suffering."

This is at least the second recent instance in which a Texas teacher was penalized for displaying "Black Lives Matter" in a school setting. In late August, a teacher in the Roma Independent School District was temporarily placed on leave after parents complained about posters hanging in her virtual classroom.

The school reinstated the teacher after a few days with the option to keep the sign. However, the teacher declined to immediately return.

Segura said the retaliation against Texas teachers "is very concerning" because it negates that teachers still have a right to free speech in the classroom and sends the message that "Black Lives Matter" is a politically charged statement.

"This is a very straightforward, apolitical statement of something that has been made to be seemingly controversial but really isn't," Segura said.