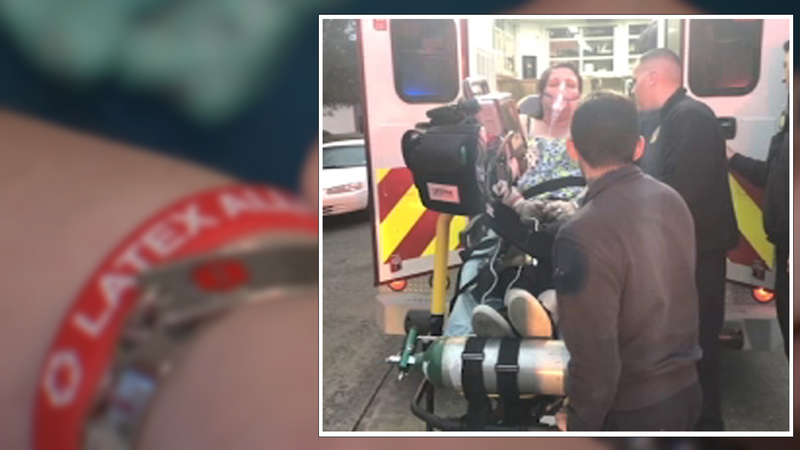 On a good day, Amy Crawford, a single mom of two and a teacher, enjoys the little moments with her boys. But, on a bad day, it can be a harsh reality.

"I ended up going to ER twice in two days," Crawford said.

Crawford is allergic to latex. She has both an airborne and anaphylactic reaction, meaning if she touches it or even smells it, she has a reaction.

"I'll get hives and swelling," she said. "My skin will turn bright red and I'll have a hard time breathing. My throat will closed up."

According to the Mayo Clinic, there are 3 million cases a year in the U.S. Those affected are allergic to certain proteins found in the natural rubber latex and a person's body can mistake it for a harmful substance.

It's a potentially life-threatening condition that can cause throat swelling and difficulty breathing.

Some who have latex reaction can also be allergic to certain fruits like avocados, kiwis, and passion fruit to name a few.

That's because they have a similar protein found in latex.

So for Crawford, it can be a life or death situation and as a teacher, her exposure is even greater in the classroom.

"There's just no aspect of my life that hasn't been affected," she said.

However, just recently Crawford found an organization that is giving her hope. The Allergen Detection Service Dogs, along with owner Kiara Gavin, has trained puppies to become latex detection dogs.

"These are working dogs just like a bomb detector dog. So, a dog that goes out and detects explosives is going to work in the same manner as a dog that detects latex or peanuts or another allergen," she explained via Skype.

Crawford is now crowdfunding in hopes of getting a service dog since they're worth up to $20,000. It's money she doesn't have.

"I realized the other night kind of had a panic attack. I don't know if I'm going to make it to get the dog. It's a scary thing to think leaving your kids in that way."

Having a service dog that can detect a latex threat would mean 'freedom' and a chance to live a normal life.

You can donate to her through her GofundMe page.