KTRK
By Ted Oberg
KINGWOOD, Texas (KTRK) -- White cabinets and a brightly-colored back-splash line the walls of Sharai Poteet's kitchen. It's a stark contrast to nearly 22 months ago when her entire kitchen was underwater.

"The whole inside of the house was destroyed," Poteet told 13 Investigates. "We had nothing left but ceilings afterwards. It was completely gutted out."

Poteet tells 13 Investigates she spent $50,000 on repairs after Hurricane Harvey devastated her home in August 2017 and there's still more work to be done, like rebuilding her bathroom and making sure the water and sewage are properly connected.

As the costs add up, Poteet applied to receive some of the $1.2 billion in federal Harvey housing recovery aid the City of Houston was granted and could use to reimburse storm victims like her.

Reimbursements are just part of the city's the massive recovery effort. Here is how the city is describing the effort.

So far, though, only four people have received that aid. Poteet is doubtful help will ever come. 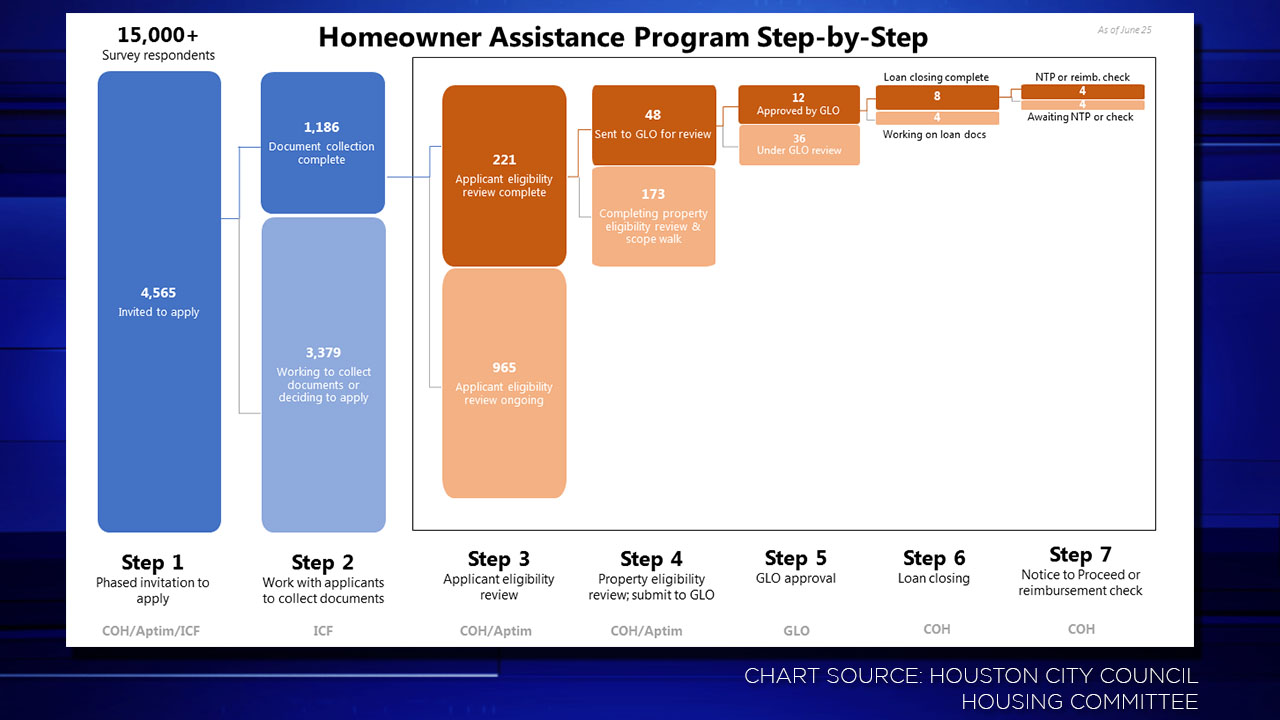 City records show 1,100 people have applied for Harvey housing aid. Nearly 3,000 more are in the process of applying, McCasland said.

His goal is for the entire process to take between six and nine months from the time someone applies for aid to when they receive help. But even he admits that's not quick enough.

"I am furious that right now the United States has a disaster recovery program that takes this long. That's unacceptable. ... It should not take this long to help people recover," McCasland said.

"I am ready to work with federal officials, state officials and the locals to figure out how we move this forward faster, but one of the things we're not going to do is move forward with the kind of speed that's going to put taxpayers at risk."

The four people who have received aid is a far cry from what McCasland said in November when he told city council that staff was prepared to work long hours to "have reimbursement checks out by Christmas and hammers swinging in January."

As families wait for aid, city records show the team of consultants Houston hired to run the program isn't waiting to be paid. ICF Incorporated, the group hired to do outreach and case management, has been paid nearly $1.7 million this year and the project manager, APTIM, has been paid $4.6 million.

McCasland said some of the APTIM money is to oversee a FEMA program separate from the city's.

Days ago, Eyewitness News reached out to APTIM, but didn't hear back. ICF sent 13 Investigates a statement saying, "We are working in close partnership with the City of Houston on the recovery effort. At this point, we defer to the Housing and Community Development Department on questions regarding the overall project status."

Last year when Houston was considering the consultant's contract, a 13 Investigates report raised questions about ICF and its team of subcontractors. Our report dug through city documents to reveal many of the subcontractors were political donors and one was Mayor Sylvester Turner's former law partner.

All of them denied there was any connection between the donations, business relationships and the pending contract.

McCasland said the payments to consultants and slow start are designed to make sure money goes to the right people. He hopes the program ramps up and helps 200 people every month, to eventually serve up to 5,000 families. But, that means some families won't get financial aid for another three or four years.

"It's about ... making sure that we're balancing the interest of speed for the homeowner, which is extremely urgent, especially for those people who are living in unlivable conditions," he said. "But also ensuring that we're not moving so fast that we're putting the taxpayers at risk of paying hundreds of millions of dollars back."

Some Harris County residents are still waiting for help, too. The county says it has received about 7,000 pre-applicants through its Harris County Project Recovery program. So far, they've identified nine people as "qualified for reimbursement" and hope to have the entire process completed by August, according to a spokesperson.

Still, nearly two years after Harvey hit, homeowners like Poteet are left wondering how much longer they'll have to wait.

"I don't believe there will be any help through the city," Poteet said. "This program probably should've left and been left in the hands of FEMA because the city doesn't know what they're doing."

Are you still waiting for assistance from your city or county? 13 Investigates wants to hear from you. Fill out the form below and our team may reach out to you for more details.(On mobile? You can open our form by tapping here.)
Related topics:
houstonted oberg investigateshurricane harvey
Copyright © 2020 KTRK-TV. All Rights Reserved.
TED OBERG INVESTIGATES