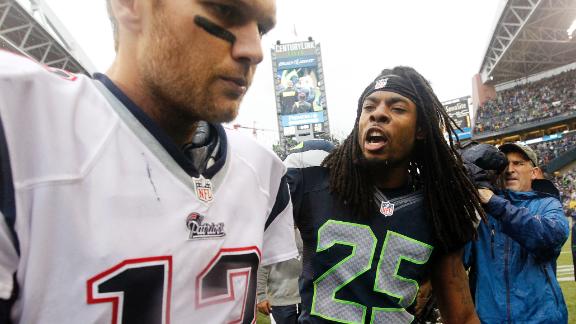 "He was pretty much saying that we were nobodies," Sherman said Wednesday about Brady. "And we should come up to him after they got the win. He said stuff like that throughout the game. So we should just take that pretty well? Sure, can I get your autograph, too?"

The Seahawks trailed 23-10 in the game at CenturyLink Field on Oct. 14, 2012, but Seattle scored two touchdowns in the fourth quarter, including a 46-yard TD pass from Russell Wilson to Sidney Rice with 1:18 to go. Sherman's comment to Brady was seen on national TV moments after the game ended.

For his part, Brady said Monday that he didn't recall Sherman's words.

"Truthfully, at that time, I thought he was just coming up to say 'good game.' That's all I thought it was," Brady told Boston sports radio WEEI on Monday. "It was loud after that game, so I didn't really hear anything. Then I went into the locker room after the game and ... he said he was talking trash to me. That was all a bit of a surprise to me."

"I think people somehow get a skewed view of Tom Brady," Sherman said. "That he's just a clean-cut guy that does everything right and never says a bad word to anyone. We know him to be otherwise.

"In that moment of him being himself, he said some things and we returned the favor. Unfortunately, he apparently didn't remember what he said. I'm sure also in those moments when he's yelling at the ref, he's just saying, 'Good job. You're doing a fantastic job. Keep it up.' "

Sherman was asked if he thinks Brady will throw the ball in his direction in the Super Bowl.

"I don't care," Sherman said. "I hope so. It will give me more opportunities to get the ball. He had me in his sights before."

Information from ESPN.com's Mike Reiss was used in this report.