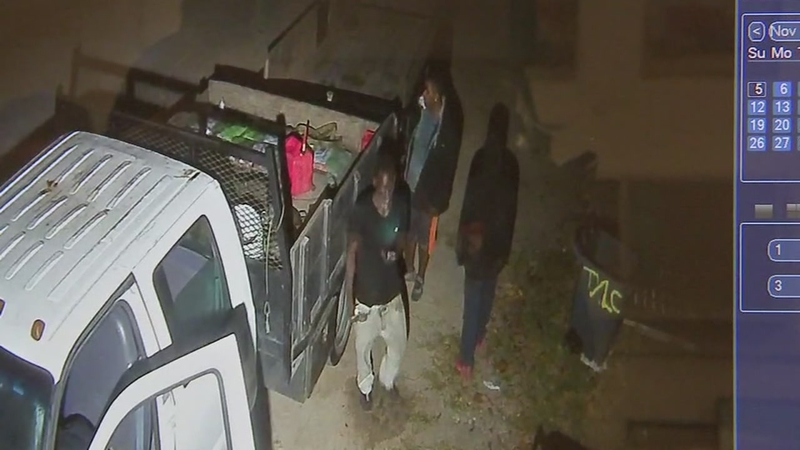 HOUSTON, Texas (KTRK) -- Four people have been arrested after police say they stole two trucks, one van, ATVs and lawn care equipment worth $400,000.

Surveillance video shows five to six men breaking into Texas Landscape Company around 9:45 p.m. Tuesday. The business is located on Creekmont Drive in northwest Houston, near the corner of Ella Boulevard and Pinemont Drive.

Video shows two men with bolt cutters trying to break into the main garage. After 10 minutes, the padlock breaks and the thieves get to work. They carry out dozens of edgers, a pressure washer and an air compressor.

The thieves don't appear to be in a rush. They were on property for nearly two hours.

The dramatic getaway happened just before midnight. Driving a stolen pickup, one of the thieves burst through the front gate. A second truck and trailer follow, then a four-wheeler.

The thieves had no idea the company's mechanic, Nicholas Isidori, was asleep in the office the whole time.

"Totally knocked out asleep," Isidori said, laughing. "The dog finally did wake up and started barking at the cops that showed up to report the incident that the neighbor called about."

Isidori laughs now, because 99 percent of the equipment has been returned, thanks to GPS trackers on the vehicle. Company owner Jonathan Edwards directed police to the thieves after pulling up the tracking app on his phone.
"I pulled up the app and saw I had equipment moving and obviously, we don't landscape at two o'clock in the morning," said Edwards.

Edwards told Eyewitness News that a neighbor called 911 after hearing the trucks drive through the front gate.

One of the trucks was found less than a half a mile away at Little York and Bingle. It was pulling a huge travel trailer that police say the thieves stole from another business after leaving the landscaping company.

To the remaining one or two suspects police are searching for, Edwards has a message:

"We will get you every time. We'll get you. You're going to get caught."