2 cruise ship passengers out of Galveston killed in Belize crash 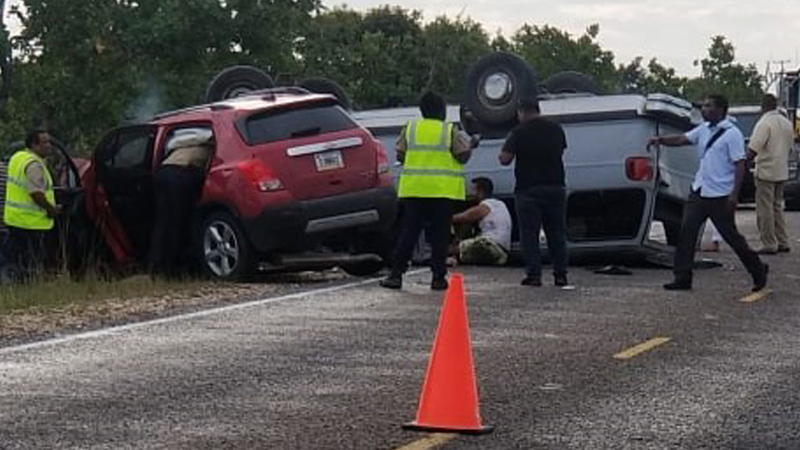 Two Carnival Cruise Line passengers and five others were killed during an excursion in Belize, according to police.

The cruise line said the guests were traveling on a 7-day voyage on the Carnival Vista, which left Galveston on Saturday, Nov. 23 and was expected to return this Saturday, Nov. 30.

Officers say preliminary information indicates a red car went into on-coming traffic and crashed into a van. All three Belizeans in the car died, along with the driver of the van and three passengers inside.

Adrian Armijo, Jr. and Sara Armijo were identified as the two Houston-area victims killed. Officials say they were traveling on the Carnival Vista out of Galveston. Their two children, David and Bianca, were also injured during the crash.

Police say the other passenger killed was traveling on an MSC Cruise ship.

Police say the passengers had just gone on an excursion and were returning to port when the crash happened. The cruise line says five other passengers were hurt and one was transported to the U.S. for care.

Michael Shamsi was in another van returning to the port at the same time. We talked to him by phone.

"We were probably maybe seven or eight vans back," explained Shamsi via telephone. "We could see the smoke come up and everybody start to brake."

He and his wife ran to help.

"Everybody coordinated together," he said. "We were just trying to the do the best we can with what we could do with our own belts and rope."

Police in Belize said the 13 passengers in the van were Americans. Those that weren't killed were injured and four remain in critical condition.

ABC13 reached out to the MSC cruise line, but has not received a response.

Guests from at least one other cruise line were in the van.

"We are aware of U.S. citizen casualties resulting from the traffic accident on George Price Highway in Belize. We are providing all appropriate consular assistance and are monitoring the local authorities' investigation. We extend our sincerest condolences to families of those lost in the accident. Out of consideration for those involved, we have no further information at this time."

Carnival also released a statement to ABC13, saying in part, "Sadly, two guests have died and the five others remain hospitalized, with one guest already transported back to the U.S. for medical care. Our Carnival CareTeam and medical staff are supporting guests and their families. Carnival Vista is on a 7-day voyage that departed Galveston on Saturday, Nov. 23 and is scheduled to return to Galveston on Saturday, Nov. 30. It is calling on Cozumel on Thursday, as planned. Please keep our guests and their families in your thoughts and prayers."

On November 27, 2019 at around 4:00 PM local time, six passengers of MSC Meraviglia were injured while on an independent and self-organized excursion in Belize when the bus they had reserved for their private tour was involved in a road accident. Unfortunately, one person passed away, while five other MSC Cruises passengers with non-life-threatening injuries were taken to hospital for medical care. Regrettably, also a number of passengers from another cruise line, the driver of the bus and passengers from the other vehicle sustained serious to fatal injuries.

As soon as this incident came to our attention, we immediately disembarked two staff members from MSC Meraviglia to provide close support to our affected passengers and flew in a team of three care team members from our Fort Lauderdale US office. Our staff on the ground remains within arm's reach of our Guests and we are making sure they receive all the necessary care, and counsel if needed. We have contacted their families too and offer all necessary support for them to be reunited as soon as possible.

We are in close contact with the authorities, as well as the relevant embassy and consular services, and our first priority now is to ensure the swift repatriation of the deceased. As for the injured, we will make sure they can return to their families soonest.

We are deeply saddened by this incident and offer our sincerest condolences to the families and those affected.