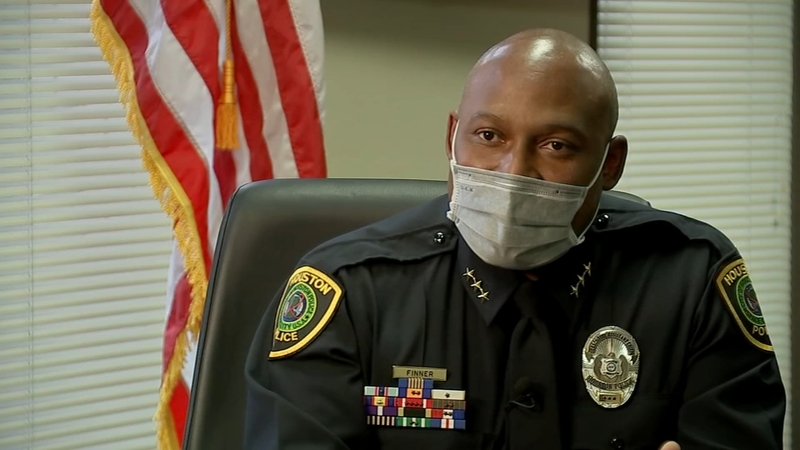 It's what he asked himself when his nephew was killed in 2012 after starting to sell marijuana, and it's what he's asking himself now as the city faces an increase in homicides and violent crime.

"You have a chief now, that I suffered that. My family has been on that front row in the church at a funeral twice, so I understand what they go through, and I want to do everything in my power to make sure we prevent those kind of incidents," Finner told 13 Investigates' Ted Oberg. "I know I was a good uncle to him, but when you become a certain age, everybody has their own choices, and I talk to the kids in the neighborhoods and kids everywhere. ... If you are at the wrong location at the wrong time with the wrong people, you can end up with your life gone, remove any one of those &#91and] you might can survive."

It's official. Houston City Council approved Troy Finner's promotion to police chief on Wednesday. He was promoted from executive assistant chief where he oversaw field operations. In the video above, ABC13's Ted Oberg spoke with him one-on-one about his goals and his plan to bring down violent crime.

As a native Houstonian who was born in the Fifth Ward and raised on the city's southwest side, Finner said he knows how important it is to build trust within the community and recognize the hardships violent crime has on victims, who sometimes can't even afford a parking fee to visit their loved ones at the hospital.

In addition to advocating for better resources for crime victims, Finner said he'll work with officers to improve relational policing and build trust within the community, despite a shortage of officers.

Still, Finner admits there's work needed when it comes to transparency and reform related to choke holds and no-knock warrants. Whenever he sees flaws with the system, whether it's with judges or other leaders, Finner said he hopes to have productive one-on-one conversations to search for solutions.

"I'm not the one that's going to throw stones at people because if you look at police, can we do some things to improve? Yeah. We can do better on our relationship building because when you look at homicide, the biggest crime fighter we got with homicide, it's all public," Finner said. "They have to trust us and they have to come to us and trust us enough to bring (us the information)."

Finner, who joined Houstonians last summer during the George Floyd protest, said he understands those tens of thousands of people who marched want to be heard and want police officers feel their pain.

"Everybody has a different life experience. Your perception is your reality. My perception is my reality," Finner said. "The way that we build trust (is) I give respect and I give value to that your life experiences and we sit down and we hear one another. Even if we still disagree, it's a way to build bridges."

Even as he takes over as police chief on April 5, Finner said he plans to continue patrolling the streets of Houston in the middle of the night, looking for areas that need more officers, or other gaps in service that could help lower the city's crime rate.

Have a tip for Ted Oberg? A problem to solve? Get in touch with us on our tip page, or send a tip below. (On mobile? You can open our form by tapping here.)
Related topics:
houstonsafetyted oberg investigatespolice chiefhouston police departmentpoliticspolicehouston politicshouston city council
Copyright © 2021 KTRK-TV. All Rights Reserved.
HOUSTON POLICE DEPARTMENT
Man wanted for 9 ATM aggravated robberies in W. Houston
Man charged in murder of dad of 7 over 'door ding,' sources say
Crews searching for Houston woman missing for nearly 2 weeks
Trailer of football team for kids 4-12 taken after it was used once
TOP STORIES
Video shows Houston women assault hostess over COVID vaccine proof
Rain chance increases this weekend, fall front expected next week
Alief among Texas districts dealing with 'devious lick' TikTok trend
Missing 6-year-old Pearland boy found safe with biological father
Crash that left mom and boy critical is 'traumatizing,' sheriff says
About 10,000 migrants being held under bridge in Del Rio, Texas
'Stanford murders' conviction renews hope for justice in 2nd case
Show More
Latinos more likely to have or be at risk for Alzheimer's than whites
Texas teen posts images of slain family, then kills self
Illinois grandmother's obituary takes aim at unvaccinated
'I have a big hole in my chest': Shooting victim walks back to scene
Hot Wheels creates 3 limited-edition toys of Houston-famous slabs
More TOP STORIES News