KTRK
By Charly Edsitty and Marla Carter
HOUSTON, Texas (KTRK) -- The family of a 24-year-old man is remembering him as a hero who lost his life while trying to help a stranded motorist early Sunday morning.

Juan (John) Manuel Flores, III, was identified by his sister to Eyewitness News as one of the two drivers who were killed in a multiple-vehicle crash that shut down all lanes of the outbound North Freeway at the North Loop on Sunday.

According to the Houston Police Department, a silver Dodge Charger was disabled in the far left lane of traffic around around 3:30 a.m. when a driver in a black truck, Flores, stopped in front of that car to try to help.

The driver of the white truck, according to investigators, left the scene and was picked up by his son.

Flores is a husband and father to three small boys. His family says he was currently working two jobs as and EMT and ER Tech. He was hoping to become a firefighter.

"I know in my heart that when he pulled over, he felt clarity in his heart that I'm going to pull over and help this man," said Ashley Flores, Juan Flores' wife.

Flores' sister said he was on his way to go pick up his family when he pulled over to help another driver.

A GoFundMe account has been set up to help Flores' family with funeral expenses.
Report a correction or typo
Related topics:
houstoncar accidentfreeway
Copyright © 2020 KTRK-TV. All Rights Reserved.
RELATED 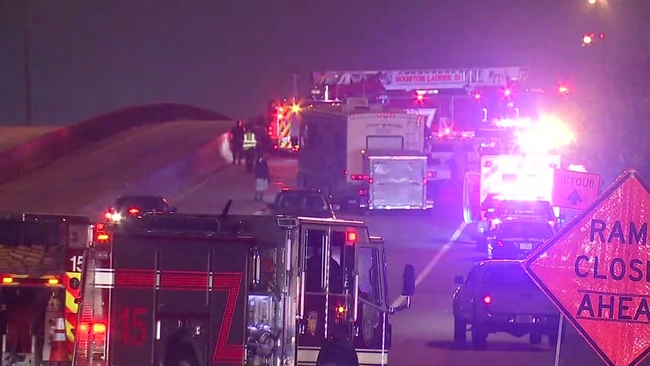