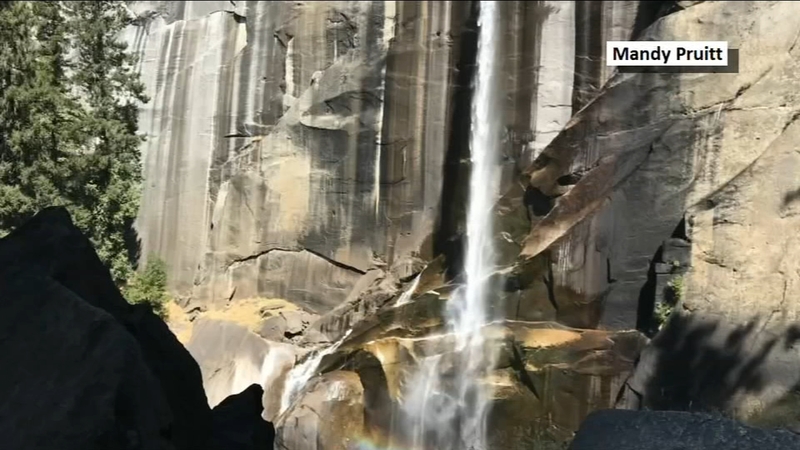 SAN FRANCISCO, California -- An Israeli teenager who fell to his death last year at an iconic waterfall in California's Yosemite National Park was trying to mimic a popular social media photograph when he fell, authorities said.

Park officials said Tomer Frankfurter of Jerusalem, 18, was near the top of Nevada Fall when he fell nearly 600 feet on Sept. 4 but offered few other details.

Documents provided Monday to The Associated Press through a Freedom of Information Act request revealed Frankfurter was with a group he had met at Yosemite and they were about to hike down when he handed his phone to a woman and asked her to take his photo while hanging over the edge.

Witnesses told authorities Frankfurter said he was visiting the United States before beginning his compulsory Israeli Army service and that he wanted to reenact a photo often taken by tourists at Telegraph Rock in Rio de Janeiro. They said they told Frankfurter that in that photo people dangle from the edge of a rock that is not far from the ground but he didn't listen.

In accounts from the witnesses, whose names are redacted, they told investigators the woman first snapped the photos but Frankfurter soon asked for help because he couldn't climb back up.

"I thought he was joking," one witness told investigators. "I turned around because I couldn't watch, but he was hanging off the rock. Then he started to struggle."

Three people rushed to help and held him by his arms and hands but he started sweating and slipped from their grip, falling to his death.

"Myself and the other two people just stood there shocked as he rolled down the cliff," one witness who tried to pull Frankfurter up told investigators. "We tried as hard as we could but we had to let go."

The month after Frankfurter's death, a young couple from India died in a fall from a scenic overlook in Yosemite. Their tripod was later discovered on the edge of the overlook and a relative said it appeared the couple died trying to take a photo.
Report a correction or typo
Related topics:
californiayosemite national parkyosemiteteen killedu.s. & world
Copyright © 2022 by The Associated Press. All Rights Reserved.
TOP STORIES
Daylight shows home destroyed after standoff with shooting suspect
What we know about man accused of shooting 3 HPD officers
Clouds clearing today, sunny through the weekend with rain next week
5 people charged in connection with Pct. 5 corporal's murder
How many times can I reuse my N95 mask?
Decades after TV anchor disappears, convicted rapist denies connection
Driver dies after slamming into 18-wheeler's trailer on US-59
Show More
Woman shot in the shoulder during robbery set up in SW Houston
Prepare for a major closure at I-69 and 610 West Loop this weekend
Officers escort body of corporal killed in ambush to funeral home
ABC13 obtains HPD scanner traffic of chase that led to shootout
'Tiger King' Joe Exotic resentenced to 21 years in prison
More TOP STORIES News