Parents of Arizona teen furious after son named 'Most Likely to Bomb the U.S.' 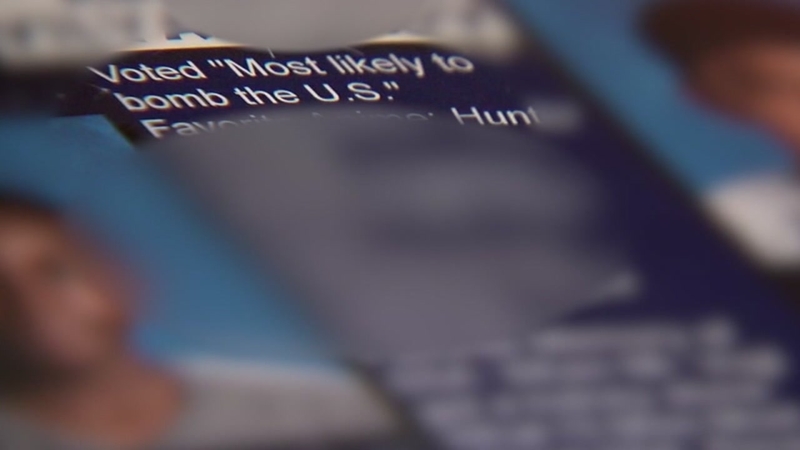 PEORIA, Arizona (KTRK) -- An Arizona teen's parents are furious their son was named "Most Likely to Bomb the U.S."

School officials say the eighth grader wrote that comment about himself in the yearbook, but his parents say they can't believe the school still printed the comment.

"I looked down and read, most likely to bomb the U.S. and I just sat there for a second and thought, no way. This is not happening," Bree Brown told ABC15.

Bree's husband, Kian, said he thought it was a joke and didn't believe it.

Bree and Kian are wondering how something like this was actually published with no oversight from the school.

"It was missed. There's a faculty advisor in charge of the yearbook. They did not catch it," said Matthew Benson, a spokesman for the Sonoran Science Academy.

School officials told ABC15 that they are investigating the incident and released the following the statement:

"On Friday night, I became aware of an inappropriate entry included with the 2017-18 yearbook in which a student self-designated they were 'Voted Most Likely to Bomb the U.S.' To be clear, there was no class vote. Each student self-selected a superlative for himself or herself. After speaking with the student and the student's parents, it is apparent the comment was a misguided attempt at humor. There was absolutely no malicious intent on the part of the student.

Regardless, our entire administrative team takes this seriously. The comment should have been caught and removed during the editing process before the yearbook was published. Our school is investigating how this incident occurred, and has already taken disciplinary action against the faculty adviser in charge of the yearbook. Going forward, we will be instituting a more stringent review process to ensure this cannot happen again.

In the meantime, we have reached out to each of our Sonoran Science Academy-Peoria families to express our deep regret regarding this incident. We are also collecting yearbooks from students who had already received them, and will have a new, edited batch printed and distributed at no additional charge to families. On behalf of Sonoran Science Academy-Peoria, I apologize for any inconvenience and for the larger situation, which does not accurately reflect our students, school mission or the values we share with our families and community."
Report a correction or typo
Related topics:
educationarizonayearbookmuslimssocietyu.s. & worldstudents
Copyright © 2021 KTRK-TV. All Rights Reserved.
TOP STORIES
Woman carjacked at gunpoint before deadly auto-ped involving HPD
2 kids uninjured after man, woman shot inside Dickinson home
11-year-old girl shot multiple times on Houston's southside
Astroworld victims' families still need answers 1 month after tragedy
Chris Cuomo accused of sexual harassment days before CNN firing
Man shot in head twice after night of drinking and fighting, HPD says
94-year-old man missing after abandoned boat found off Galveston coast
Show More
Rep. Thomas Massie posts photo with guns, asking Santa for ammo
Cold front Monday brings storms and cooler temps
Omicron updates: New US travel rules go into effect Monday
Houston NFL player helps expose student-athletes to careers in STEM
Man says he helped parents of accused Michigan school shooter
More TOP STORIES News