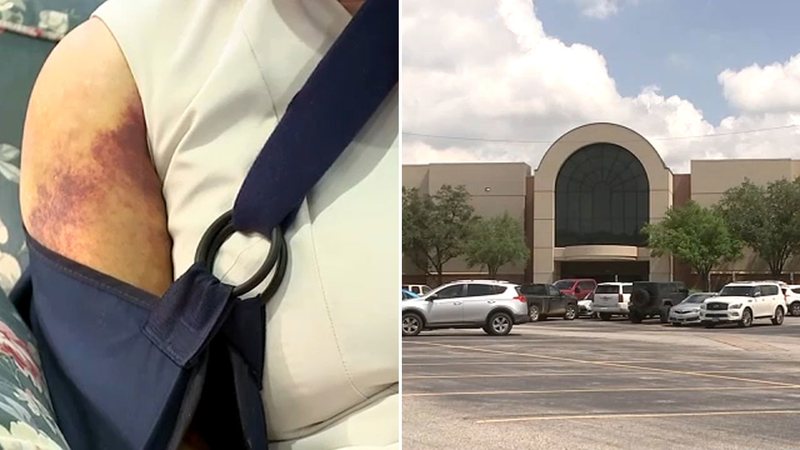 MONTGOMERY COUNTY, Texas (KTRK) -- Extra patrols have been added to The Woodlands Mall parking areas in the wake of a violent robbery Saturday afternoon.

A woman's purse was taken by force, but the aftermath for her is more painful.

The woman, who asked she not be identified, said she was walking to her car in the parking lot. She had already opened the door and was getting in when a man in a hoodie grabbed her and pulled her purse out of the car.

"My instinct was to hold on to the purse, and that's when he dragged me across the pavement," she said. Her right shoulder is now broken in four places, and large dark bruises extend from her shoulder down her arm.

"I thought I had dislocated it because my arm was just hanging there," she said. Because of the rain that day, few shoppers were in the parking lot, and she saw no mall security.

"I had to walk into Dillard's and asked them to call police."

Purse-snatching is not an unusual crime now, but Lt. Scott Spencer with the Montgomery County Sheriff's Office said this kind of robbery hasn't been reported recently in the Woodlands area.

Surveillance video retrieved shows the mall parking lot, but the assault was apparently out of view. The robber and a driver got away in an older model green Ford dually pickup truck with chrome bars and a toolbox in the truck bed. The suspect was wearing a dark hoodie.

The injured woman believes there should be more security at the mall, and better surveillance systems. A statement from the mall management company expressed regret over the assault. As for security, the statement reads: "While we don't publicly disclose our security systems and protocols, we're constantly reviewing and evaluating our processes. The safety of our guests and tenants is our highest priority every day."

The victim said she dresses inconspicuously, carries only a small purse with ID, a credit card and a phone. On the day of the robbery, she had only $30 in cash. "I always pay attention to my surroundings," she said, "but this happened so quickly. He ran at me from behind and the truck roared up."

Lt. Spencer said that it's best to let go of what the robber wants to avoid more serious consequences. The woman agrees, but it is instinct to hold on to what belongs to you.

She is awaiting surgery in what's called a reverse shoulder replacement.