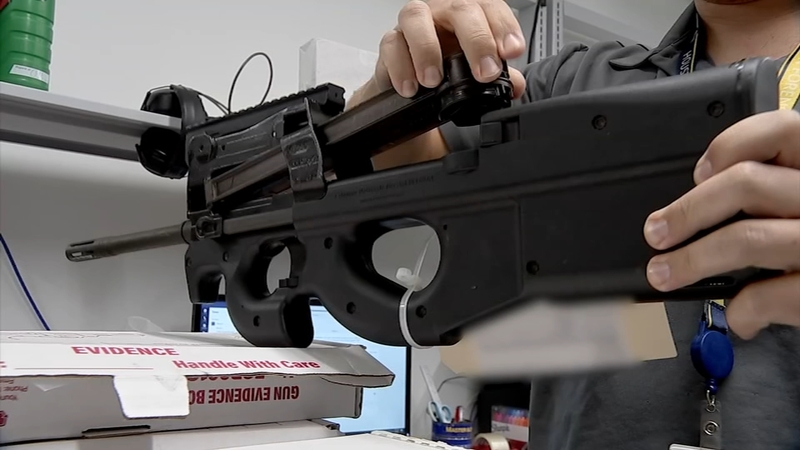 HOUSTON, Texas (KTRK) -- When Houston police officers showed up at a southwest Houston apartment complex on Jan. 7 to investigate a reportedly stolen truck that was located, the two suspects inside took off running.

One of them allegedly left a pistol under the driver's seat and as officers arrested both suspects, they also seized the weapon, adding it to a growing list of evidence to process as violent crime continues to rise in Houston.

"It's very dangerous out there and we got guns everywhere," incoming Houston Police Department Chief Troy Finner told 13 Investigates' Ted Oberg. "If you're a felon and you're caught and you're in possession of a gun, you have a violent history, we need to hold you accountable."

Gun seizures have doubled over the last year and in this case, the seized gun was the key to unlocking another violent crime that occurred four days earlier, less than half a mile away.

On Jan. 3, police records show two men approached another man and allegedly pulled a gun and demanded his car and wallet. When the victim didn't give it up, the suspects took off, firing a single shot as they left.

Investigators at the Houston Forensic Science Center matched the shell casing from that attempted robbery to the gun found days later in the stolen truck incident, allowing police to file charges against 19-year-old Andrik Lopez.

The case, which is still pending, is just one of the gun matches the Houston Forensic Science Center and Houston Police Department made so far this year as they deal with an avalanche of seized guns.

"Guns tend to not move very far geographically and if you see a gun get used in a crime, the likelihood of that gun being used again in another crime within the next couple of weeks is pretty high," said the forensic science center's President and CEO Dr. Peter Stout. "If you can identify that gun and identify the linkage of who may be associated with that gun quickly, you may be able to head off the next crime that that gun is going to get used in."

During the first 25 days of March, 422 guns were seized, according to the Houston Forensic Science Center.

The center says receiving 40 guns on a Monday - all weapons that were seized over the weekend - is typical. But on March 15, they received 60 seized guns.

Earlier this month, 13 Investigates met with technicians at the Forensic Science Center as they cataloged 30 firearms of all sizes, makes and models. The guns were newly seized from the streets of Houston in connection with charges ranging from felon in possession of a firearm and possession of a controlled substance to DWIs and aggravated assaults.

Kambrie Kissmann, a National Integrated Ballistic Information Network technician at the center, said she's been working in that department for about a year.

"When I first started, we were working on maybe eight to 10 (seized guns) a day and right now we have 14, so it's increased quite a bit and we still have the backlog as well," Kissmann said. "I think I'm just more surprised that it never stops. We used to have days where we would get four or five in a day. Now, every single day is 20 or so ... so we never really have a break."

Whenever technicians receive a gun seized from a potential suspect, they examine it and fire it to collect casings, or what's left after a bullet is fired. Those casings are then photographed on a microscopic level and the detailed photos are entered into NIBIN, a national Bureau of Alcohol, Tobacco, Firearms, and Explosives database.

The photo serves as a fingerprint of the gun, archiving the specific markings it makes on a casing when it is fired. That information is then compared to other casings within the area to see if it was used in another crime.

"Once something is imaged into the database, the network does its magic and it looks at things based on the caliber and the style of firing pin as well as offense dates and it looks for potential matches," said Donna Eudaley, a manager at the forensic science center. "There could be hundreds of them in the list. A person actually has to look through them and look within those potential matches (to see) is if there is a real match."

Eudaley said about two to five percent of the guns end up with a match. A match is a powerful clue, but the small percentage is also a powerful reminder of how many guns are used by suspected criminals in our city. Once the matches are narrowed down from hundreds to just a few likely matches, they are sent to investigators, who can then use the information to link crimes where the same firearm was present, ultimately helping investigators identify potential suspects.

Within five days of capturing those images, forensic investigators aim to tell detectives if the casings match a gun that's been used before and seized by law enforcement.

"It's one of the pieces that investigators can use to help solve that crime," Eudaley said.

At least 17 people have been killed in shootings this month alone in Houston, and that doesn't include other homicides, such as stabbing deaths.

The increase in crime means more seized guns. With nearly 5,000 guns coming into evidence in Houston last year alone, the chances of making a match are going up.

Houston forensic scientists have made 40 to 50 matches every month since October, which have led to some arrests, but not enough to stop the flow of guns onto our streets.

"It's not so much taking guns off the street. It's taking guns out of the hands of those violent individuals who don't have any need or (are illegally) possessing those guns," Finner told 13 Investigates' Ted Oberg.

While HPD and the forensic science center's work on a recent case led them to file an aggravated robbery charge against Lopez in January, he hasn't been convicted. The charge was his sixth felony charge since 2019, but the outcome of all of those cases hasn't been determined due to the pandemic's impact on slowing down courts.

There are 42% more active murder cases in Harris County, 27% more capital murder cases and 49% more aggravated robbery or robbery cases this year compared to last year, according to a report from the District and Statutory County Courts.

As he looks to take over the HPD as chief on April 5, Finner said he has already met with the FBI and other federal partners to create a plan to go after "gang members, or those individuals who are pulling the trigger, shooting and killing people."

"We better be making sure we're laser focused on those individuals who are committing the violent crime," Finner said.

In the meantime, technicians at the forensic science center will continue cataloging more and more firearms every day as crime continues to increase.

"They're a whole lot busier and that's actually one of the serious worries I have," Stout said. "When this works, which we get examples regularly of this working, it heads off guns being used in the next crime where somebody gets hurt or killed." 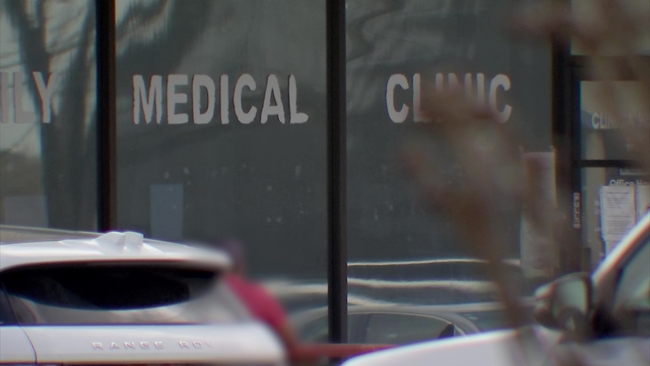