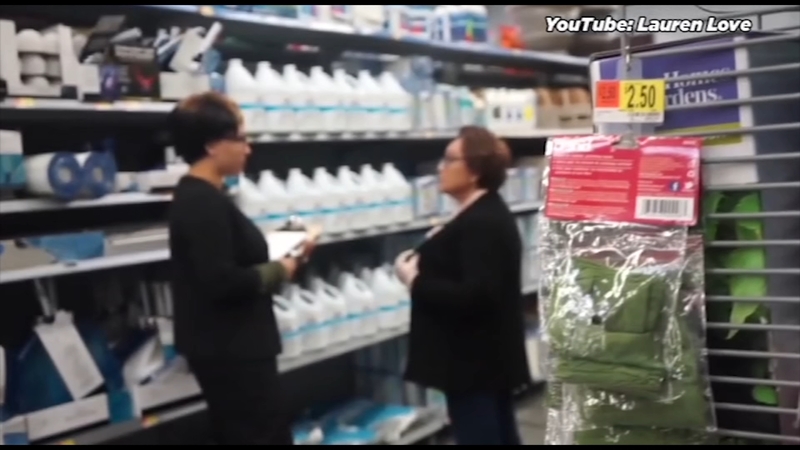 RICHMOND, Texas (KTRK) -- What was meant to be a prank doesn't have a Fort Bend County woman laughing.

An online video shows a woman pretending to be a manager firing people at Walmart.

Cameras were rolling as a woman carrying a clipboard walked around the Walmart store in Richmond.

"I'm going to need to see your badge and your vest because you're fired," said the woman in the video posted to YouTube.

A prankster poses as a Walmart manager and "fires" employees.

The employees looked shocked and upset. That was until the prankster filled them in on the joke: "It's a camera, I'm pranking you."

But the prank went too far for employee Maria Leones. "I felt so powerless at that time."

Leones has worked at the Walmart for nearly six years. She thought she lost her job when she was pranked a couple of weeks ago.

Leones is still crying. The reason: her husband, Eduardo.

"It might be fun for some people, but not for people who have already had a traumatic experience," Leones said.

A few months ago, her husband had triple bypass surgery. He's at home recovering.

Leones is the only one making money, and her husband relies on her health insurance.

"I don't think it's good to play on someone else's emotions," Leones said.

Walmart doesn't think so either. The company sent us a statement saying in part:
"This prank is offensive and the people responsible are no longer welcome in our stores. We've taken actions on behalf of our associates, including asking YouTube to remove the video and calling their attention to the bullying nature of this hoax."

The woman behind the prank, Lauren Love, declined to do an interview. She expressed remorse after pranking Leones.

"Honestly, the last one, I felt so bad, she started crying," Love said.

What she does want is for Love to never do this again. "She crushed me at that time."