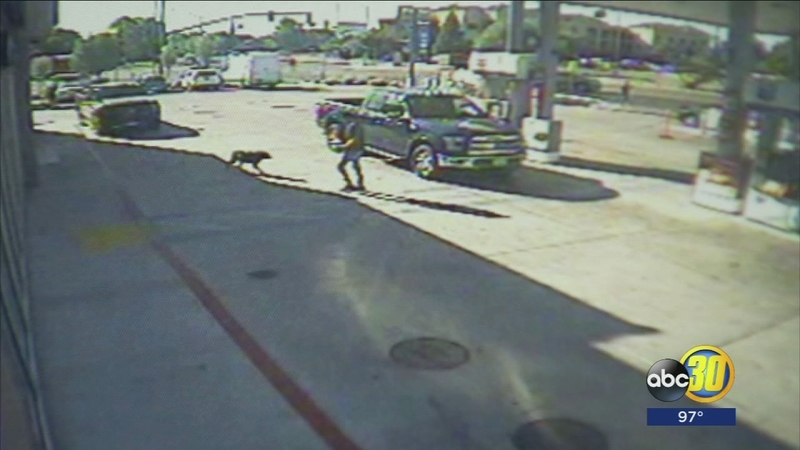 MERCED, California -- It was 8:44 a.m. on July 31st, surveillance cameras were rolling when a man walked to a Chevron Gas station in California with his black lab by his side.

After the man goes in the dog waits outside by the front doors for him to return-- that is, until a white truck pulls up. In the video you can see once the driver gets out, the man and the dog make their way to each other and seconds later are playing in front of the convenience store.

"It just makes no sense why you're going to up and take someone who has a stray dog," said Frederick Stevens.

Stevens said that dog was his-- a dog he found nearly two years ago.

"I sleep with that dog that is my best friend-- it just tore me up."

Stevens said his mom even posted on a lost and found pets Facebook page in February of 2016 trying to find the rightful owner. But months passed, and then a year and no one came forward. So they made the dog a permanent part of their family, naming him Shadow.

Our reporter asks, "that's what hurts the most?"

"That and my son because he doesn't deserve that," Poole said.

We went to the home of the man who took the dog and found the truck seen in the video in the driveway. He claimed Shadow is Luke, a dog he loved for seven years.

"I'm sympathizing with them as well, and I know that's my dog," said the man.

The man wanted to remain anonymous, but said he tried finding the person who left the dog outside the store. Video even shows a conversation he had with someone he thought was that person.

The Stevens' said after two days of looking for the animal they found where he was. They contacted the Merced Police Department, but they said the police told them the man seen in the video leaving with their Shadow showed officers a picture taken six months ago proving it was his Luke.

"It makes no sense to me, because the dog can't be in two places at once."

The Central California SPCA said after about 30 days of finding a pet it is safe to keep it as long as you can show proof that you will be legally responsible. The spokesperson said microchipping is one way to claim ownership.

We also reached out to the Merced Police Department and the Merced Animal Control but have not heard back from either agency at the time of this report.