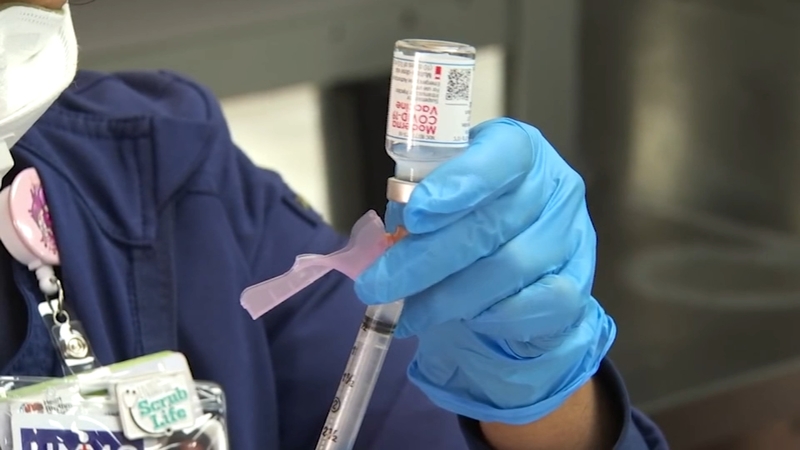 Some counties waiting on supply of additional vaccine doses

GALVESTON COUNTY, Texas (KTRK) -- The Houston Health Department announced it received more vaccine doses and booked 2,600 appointments in 16 minutes in order to vaccinate thousands of people this weekend at its site in Minute Maid Park, while surrounding counties are waiting for more vaccine doses from the state.

UTMB Galveston told ABC13 a shipment of doses did not arrive on time this week, forcing it to cancel more than 6,000 appointments for people scheduled to receive their first dose of the vaccine.

This is the statement sent to ABC13 on Friday morning:

"It is true that UTMB did not receive a vaccine shipment this week. As previously stated, UTMB does not control the supplies and distribution of COVID-19 vaccines.

People who were scheduled to receive the first dose of a COVID-19 vaccine were able to do so through Tuesday.

After that, we unfortunately had to postpone previously scheduled first shots. We have been contacting affected patients.

Individuals who were previously scheduled to receive their second dose at this time will still receive that shot in order to properly complete the vaccination process in a timely manner."

Garry Upton has two family members waiting to get their second dose of the vaccine through UTMB Galveston. He said he was one of many who tried to get an appointment for his first dose and even tried to sign up in Brazoria County, only to find out its supply was gone too.

"We see pictures of all these people getting shots," Upton said. "We're sitting here saying, where is mine?"

Waller County Office of Emergency management said in the past five weeks, its department has received one shipment of 800 doses from the state.

"This is a supply and demand issue," Brian Cantrell with Waller County OEM said. "We really want our citizens to have it as they want to have it also. So the vaccine is allocated to the federal government. They come through the state, and then they go to these local providers. It's a little challenging for your Office of Emergency Management, not knowing how many vaccinations you can get. We continue to work through it and to make sure we're working through the process and as we do receive vaccinations, working with the public to make sure we can vaccinate as many people as possible."

Harris County Public Health is also waiting on another shipment, but in order for it to open up a 'mega' vaccine site, it will have to know there is enough supply to vaccinate its population of five million people.

Our primary message on vaccines right now is this: Be patient and stay informed. Keep up with the latest on https://t.co/2ukVnamSjm pic.twitter.com/p9ptqNthhI

The following statement was sent to ABC13 Friday afternoon from a spokesperson with Harris County Judge Lina Hidalgo's Office:

"As of Wednesday we've received 18,000 doses total from the state - all have already been allocated and are in the process of being administered to eligible folks.

We've been receiving doses from the state on a weekly basis, but the number has not been consistent. Last Friday, we received 8,000 doses, for example, and we may get more this week.

Given the extremely limited supply, Harris County Public Health is not in a position to set up mass vaccination sites. We hope to receive more vaccine so we can be able to scale up, but it all depends on the supply we get."

More information from the state regarding the vaccine rollout and reaching underserved populations is anticipated to be announced next week. Stephen Williams, the Director of Houston's Health Department, reiterated Friday that those who set up appointments at its mega sites do not have to reside within the Houston city limits.