2021 was the 2nd deadliest year ever on Texas roadways with more than 4,480 deaths, TxDOT says

The Texas Department of Transportation sent out a press release in March detailing its findings that are part of a larger issue nationwide: Roadways are becoming increasingly deadly. TxDOT reported there were more than 4,480 deaths on Texas roads in 2021, only a little behind 1981, the deadliest year to date with over 4,701 deaths.

Roadway deaths are also on the rise nationwide. Officials reported an estimated 20,160 people died from vehicular crashes in the first half of 2021, 18.4% higher than in 2020. Texas saw an increase of almost 15% from 2020-21. TxDOT elaborated on the shared responsibility among Texas drivers, roadway engineers and law enforcement to reduce the number of deaths on Texas roads.

"Driver behavior is one of the causes but also one of the most important solutions," Transportation Commissioner Laura Ryan said in a news release. "This is not blame. These are facts. We all have a role. TxDOT can do more, and we accept that responsibility. The driving public can do more. For instance, in 2021, a total of 1,522 people were killed because of speed, and a total of 1,219 were killed because they were not wearing a seat belt. These were decisions made by people that could have potentially saved 2,741 lives."

Art Markman, a psychology professor at The University of Texas, informed TxDOT leaders and transportation stakeholders at the annual Texas Transportation Forum in February about coronavirus-related pressures that have had a negative impact on Texas roadways. 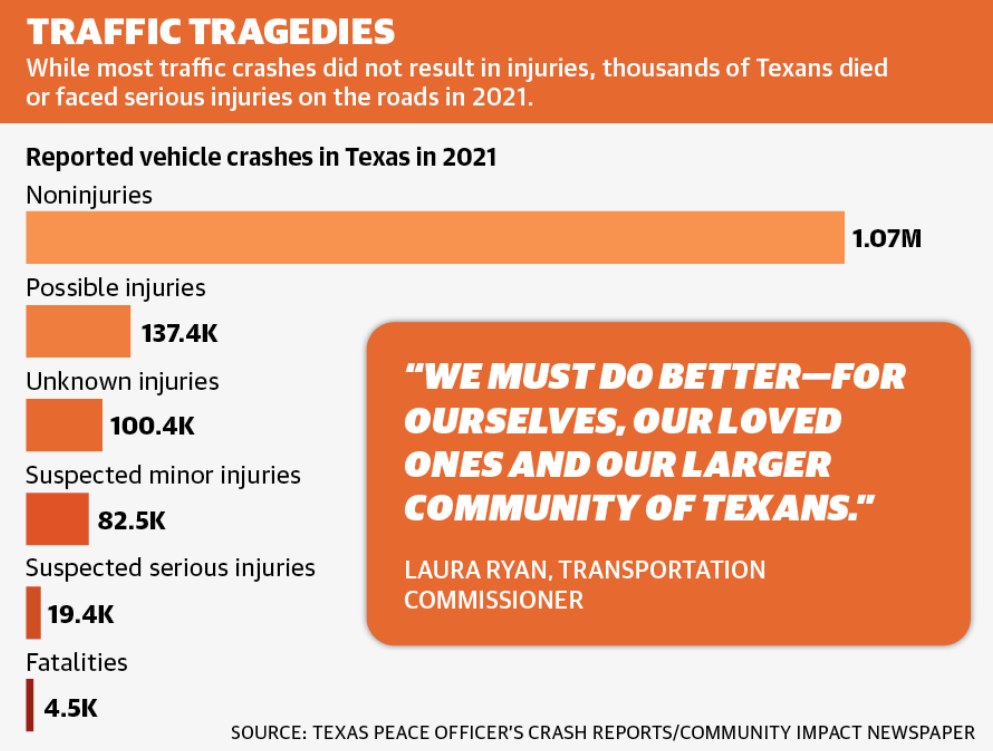 RELATED: Houston stretch of highway named deadliest in the U.S. by new report

The release provided information on initiatives TxDOT is researching and studying before implementing to aid in roadway safety. Some of the initiatives include traffic safety campaigns and law enforcement funding grants as well as proven life-saving roadway designs. TxDOT is also reviewing crash data to identify areas where drivers are more likely to crash and will use its findings to focus improvement initiatives on those areas and share the data with the driving population.

Officials within the agency believe the implementation of the above initiatives and focusing on engineering and enforcement will greatly reduce the number of deaths on Texas roads.

"But make no mistake: This is an urgent call to action for all of us behind the wheel," Ryan said. "We can do better. We should do better. We must do better-for ourselves, our loved ones and our larger community of Texans. Not a single death on our roadways is acceptable. Let's end this streak."