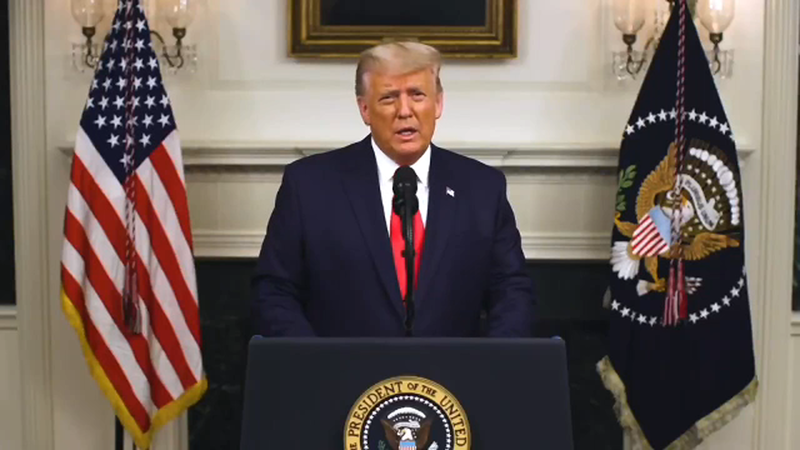 WASHINGTON -- President Donald Trump posted a 46-minute video of what appears to be him delivering a speech about the election in which he repeats falsehood after falsehood.

Trump recycled a lot of the same false claims that he and his lawyers and allies have been talking and tweeting about over the past month -- and used at least one poster board of a chart to demonstrate his points.

The video is the latest factually challenged tirade from President Trump. He said he has no higher duty than to defend the constitution, claiming our nation's election system is now "under coordinated assault."

It comes a day after Attorney General Bill Barr told the Associated Press that "to date, we have not seen fraud on a scale that could have affected a different outcome in the election."

The President also recently fired via tweet a top Department of Homeland Security official after Christopher Krebs, who headed Cybersecurity, said this was the most secure election in American history.

"Even after this office request that President Trump trying to quell the violent rhetoric, being born out of his continuing claims of winning the states where he obviously lost, he tweeted out, 'Expose the massive voter fraud in Georgia,'" Georgia Secretary of State Brad Raffensperger said Wednesday morning. "This is exactly the kind of language that is at the base of the growing threat environment for election workers who are simply doing their jobs."

Meanwhile on Wednesday, Trump allies called for Georgians to boycott the Senate runoffs in that state.

If Republicans lose those seats, it would cost the GOP the Senate.

A top Georgia elections official on Tuesday lashed out angrily at the rhetoric surrounding the election and the threats of violence that have resulted, specifically calling on President Donald Trump to rein in his supporters.