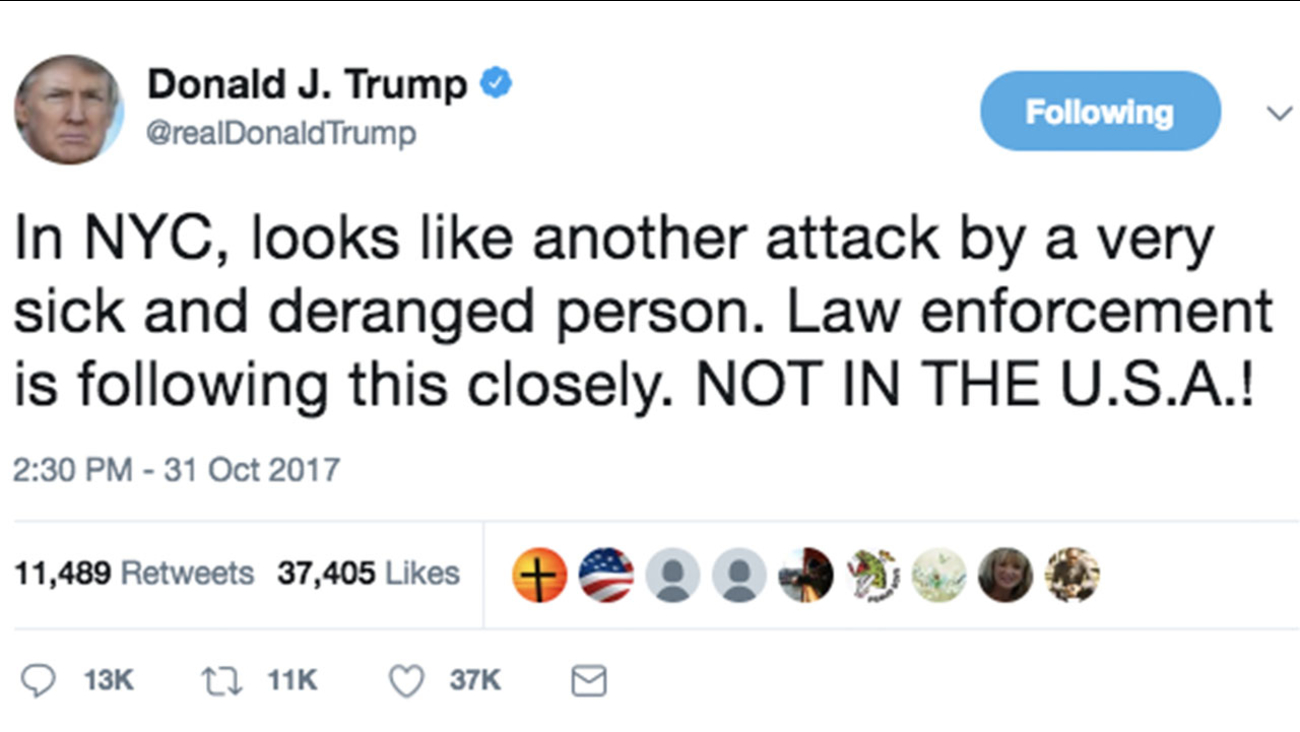 NEW YORK -- See what politicians and other notable figures are saying on social media after a truck mowed down people on a bike path in New York City Tuesday evening.

In NYC, looks like another attack by a very sick and deranged person. Law enforcement is following this closely. NOT IN THE U.S.A.!

My thoughts, condolences and prayers to the victims and families of the New York City terrorist attack. God and your country are with you!

New York's resilience is stronger than a cowardly act of terror. Thinking of the victims, their families, & the responders who saved lives.

Terror will not change New York, we will go forward stronger together. #Manhattan

Michelle and I are thinking of the victims of today's attack in NYC and everyone who keeps us safe. New Yorkers are as tough as they come.

New Yorkers see this attack for what it is—an attempt to sow fear. We stand against terror as we grieve for the victims and thank the @NYPD.

My heart breaks for #NYC today. Thoughts & prayers as we monitor the situation.

My thoughts are with the victims of today’s horrific attack in Manhattan and their loved ones. https://t.co/1zCNc5PiTK

Saddened by the tragedy in NYC. Our prayers are w/the victims, their families & first responders. Those responsible must be held accountable

A horrific act of terror in NYC today. My heart is with the victims and families—I am grateful to the NYPD, FDNY, EMS, NYS police and FBI.

Thanks NYPD for rapidly responding to tragic situation downtown. Worried & saddened to hear about injuries & loss of life.

Overwhelmed today with thought of the pain and heartache suffered by victims and families in New York. God bless these fellow Americans.

Heartbreaking. Praying for the victims of the tragedy in Lower Manhattan.

Devastated for the victims and their families tonight & inspired by the spirit of this city. Sirens and trick or treaters everywhere. 💙🗽

Heartbreaking news coming out of NYC. Praying for the victims.

Please join me in sending prayers to the people of New York.

Prayers with those killed and injured in NYC and their families.

Tonight our hearts are with the victims, their families and all the people of New York. Stay safe and stay strong.

F*ck this truck-driving monster. Let him fade away. Don’t bother with his name, only the names of his victims. I love New York City.

New York. My heart is with you always and forever. Devastating news. My soul and heart is with the victims and there loved ones x horrific

I am shocked hearing about what's going on in Manhattan right now. I don't honestly even know what to say.

Oh God. Just read about NYC attack. I can’t stomach this non-stop senseless hatred and violence. So sad for the city and all those affected.

God bless you New York. You are a strong, vibrant, multicultural city and nothing will ever bring you down! My heart is with you!

Terror attack in NYC, not far from 9/11. Deepest condolences to the families of those murdered; and those involved who are scarred forever.