KTRK
By Stefania Okolie
HOUSTON, Texas (KTRK) -- A Grocers Supply truck driver is being hailed a hero after his brave actions Tuesday morning on the highway.

Early Tuesday, a big black piece of debris was blocking the fast lane on I-45 North near downtown.

Cars slowed and swerved to avoid hitting the debris.

Deonta says when he came across it he knew he had to do something.

"I told my trainee to pull over. Made sure it was safe. I looked both ways before I got out and I just proceeded to go get the debris," Blaylock said.

"Say we would have went around it and other cars kept going around it, eventually somebody wasn't gonna see it and run it over. It could of caused an accident, anything coulda happened," he added.

Deonta made it safely from his truck to move the debris, and back inside. He credits his extensive safety training.

We've seen highway heroics before, especially when it floods.

Last October, ABC13 captured a man in a bright neon vest using a shovel in knee-deep water to unclog a drain along Highway 288.

ABC13's Deborah Wrigley captured a "highway hero" who worked alone to unclog a drain that caused Highway 288 to flood.

But we don't even have to reach back that far for another example.

Just last month, a construction worker who is part of the massive 288 project also got down in high water to clear a drain along Highway 288 and Southmore.

As soon as the man finished unclogging the drain, the water was gone. 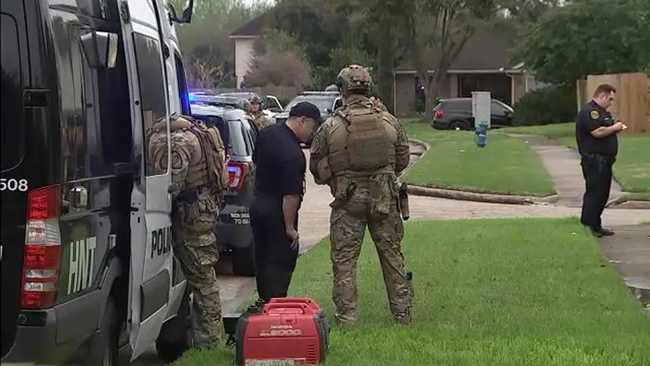