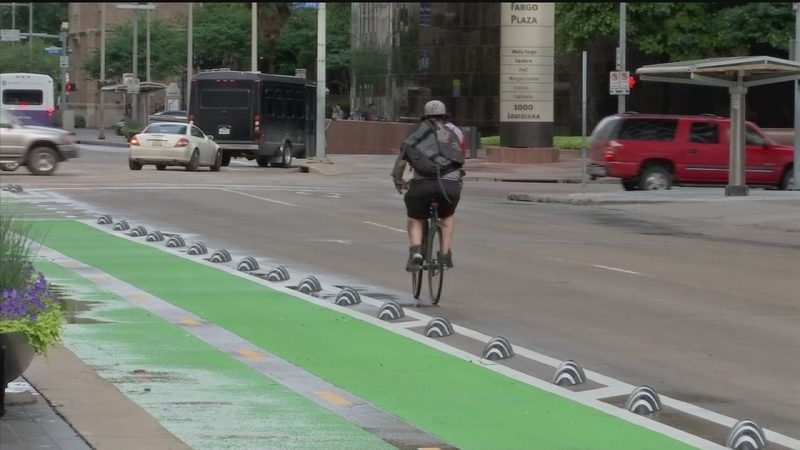 HOUSTON (KTRK) -- Confusion over bike lanes in downtown Houston has left cyclists pleading for the public to pay attention.

In some cases, drivers seem to be using the spacious lanes as premier parking spots. The end effect leaves lanes blocked, forcing cyclists to find another way to get from point A to point B.

Michael Payne runs Bike Houston, an organization dedicated to making the streets safer for cyclists. He shared a photo which shows a white van parked in the green bike lanes. Payne revealed since the lanes opened, there's already been a crash between a car and bicyclist.

Payne stressed drivers need to make sure they're looking both ways on Lamar to avoid a collision.

"The drivers aren't used to having cyclists going eastbound on Lamar. They need to be careful when they are turning across the lanes," said Payne. "Houston is growing very rapidly. We need to create options for people to circulate in the city safely. We know that by thinking about people and about how people experience the city we can improve that experience. We can make it safer. More people will walk, more will cycle. It's better for their health and it will make Houston a more desirable place to live."

Payne said if people want to get involved in the effort, they should visit bikehouston.org or houstonbikeplan.org.

Eyewitness News also checked in with Houston B-cycle, the bike share association which operates 29 stations across the city. Houston B-cycle allows people to check out bicycles by the hour for a fee. The group's executive director, William Rub, reported their busiest week ever happened at the end of March. Rub said in one week alone, the company experienced 3200 checkouts. The numbers translates to about 190 to 195 bikes on the streets at any given time, just from the Houston B-cycle program.

"It was a learning curve when the light rail started and people were trying to maneuver around that during traffic. It's going to be the same thing with the shared bike lane," said Rub. "You see the city from a completely different perceptive. You have the opportunity to actually observe what is going on around you. You see so much detail. You're not flying along at 30 to 40 miles per hour."