Jamal Khashoggi among The Guardians, group named TIME Person of the Year 2018 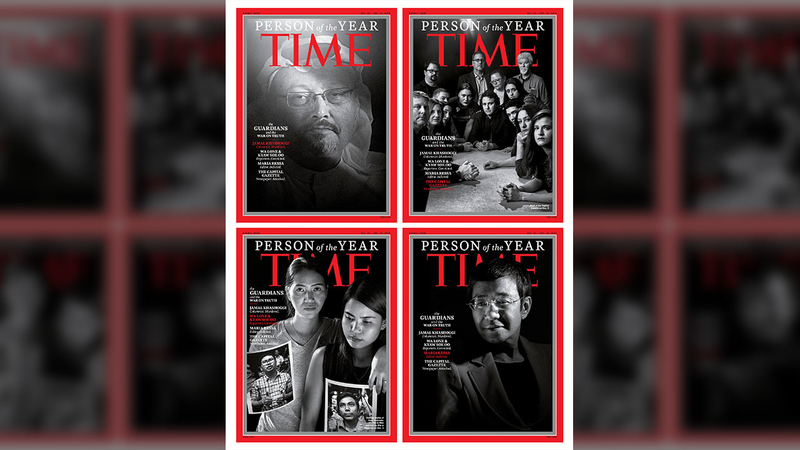 Time announces 2018 'Person Of The Year'

TIME Magazine has announced the 2018 Person of the Year: The Guardians.

The group includes four journalists and one newspaper. Among the journalists is slain Saudi writer Jamal Khashoggi. The others in the group are Maria Ressa, Wa Lone, Kyaw Soe Oo, and the Capital Gazette, where five staff members were gunned down in a newsroom shooting earlier this year.

The title, which dates back to 1927, is given the person or group of people who the magazine's editors deem to have had the greatest impact on the year's events, good or bad.

The recipients were announced Tuesday, the day after the shortlist was released. President Donald Trump came in second. He was already named the Person of the Year in 2016, shortly after being elected. Robert Mueller came in third.

RECIPIENTS: Who are 'The Guardians?'

TIME wrote that these journalists were chosen because they are representative of struggles that journalists face around the world.

"They are representative of a broader fight by countless others around the world-as of Dec. 10, at least 52 journalists have been murdered in 2018-who risk all to tell the story of our time," TIME's editor-in-chief explained in a story explaining the choice.

Jamal Khashoggi, a prominent Saudi journalist and Washington Post columnist who was murdered in Turkey earlier this year. The death of Khashoggi, who had spent time living in the U.S., stirred up an international controversy after reports that Saudi Crown Prince Mohammed bin Salman was involved. The country's government has denied the prince's involvement.

Wa Lone and Kyaw Soe Oo, two young Reuters journalists who were arrested in Myanmar after investigating the killing of 10 Rohingya Muslim men and boys by members of the country's military. In September, Lone and Oo were sentenced to seven years for breaching the country's Official Secrets Act. The United States and the United Nations were among the many groups that denounced the decision.

Maria Ressa, a veteran journalist in the Philippines who faces up to 10 years in prison for tax evasion. Ressa and the publication she started, Rappler, have covered the drug war of Philippine President Rodrigo Duterte, including suspected extrajudicial killings.The country denies any political motivation for the tax charges, according to TIME, but the Committee to Protect Journalists (CPJ) has called it "a direct assault on press freedom in the Philippines."

The Captial Gazette newspaper, where five staff members were gunned down in a newsroom shooting in June. Just days later, the staff published a letter thanking their supporters but writing, "We won't forget being called an enemy of the people ... Because exposing evil, shining light on wrongs and fighting injustice is what we do."

The shortlist has been announced for the title, which names the person with the most influence, good or bad, on the year's events.

Here's a look at everyone who was on the shortlist this year in addition to Khashoggi.

Donald Trump, 45th president of the United States. According to TIME, Trump is nominated this year for "navigating crises" like the Russia investigation and for his controversial policies.

Separated Families, including those affected by the "zero tolerance" policy announced in April, leading to an international outcry. The policy officially ended in June, and the government said last week that only a handful of the 2,500 children who had been separated as a result of the policy were still waiting to be reunited.

Vladimir Putin, President of Russia. Putin was re-elected for another six years as the United States investigates whether his government meddled in its 2016 election.

Ryan Coogler, director of Black Panther. The megahit was the top film at the box office this year, becoming the most popular superhero film of all time and stirring up Oscar buzz ahead of February's show.

Christine Blasey Ford, a clinical psychology professor in California who accused then-Supreme Court nominee Brett Kavanaugh of sexual assault. After a judiciary committee hearing in which both Ford and Kavanaugh testified, Kavanaugh's nomination was approved.

March For Our Lives Activists, a group of students advocating for gun control reform. The movement was started after 17 people were killed at a shooting at Marjory Stoneman Douglas High School in Florida on Feb. 14.

Moon Jae-in, the president of South Korea. Moon participated in three summits with North Korean leader Kim Jong Un this year in an attempt to broker an agreement amid nuclear weapons tensions.

Meghan Markle, now officially known as Meghan, Duchess of Sussex. The American actress joined the British royal family in May when she married Prince Harry. She is expecting their first child next year.