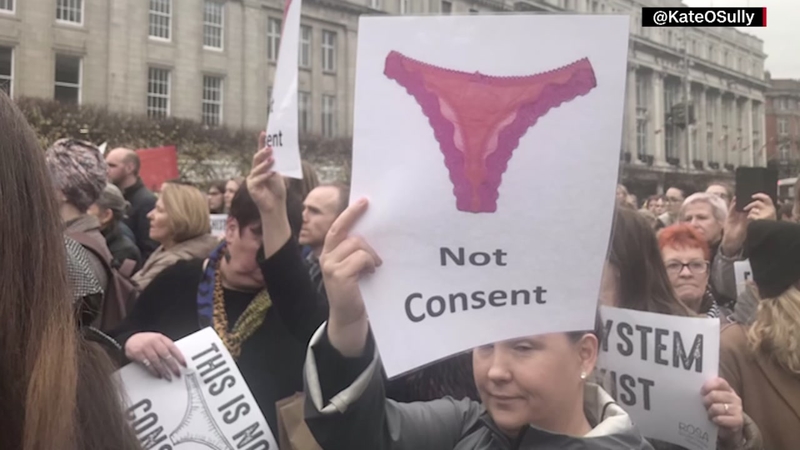 DUBLIN, Ireland -- It took a jury in Ireland less than two hours to find a 27-year-old man not guilty of raping a 17-year-old girl after the defense told jurors in the closing arguments that because the victim "wore a thong with a lace front" she was "open to being with someone."

The 17-year-old girl said that she had been dragged up a lane in the city of Cork and raped. The man accused of raping her claims it was consensual.

According to CNN, the case hung on the issue of consent, but what the defense reportedly said has sparked outrage.

Journalists in the court report that defense lawyer Elizabeth O'Connell said to the jury, "Does the evidence outrule the possibility that she was attracted to the defendant and was open to meeting someone and being with someone? You have to look at the way she was dressed. She was wearing a thong with a lace front."

The reaction to those comments triggered protests in Dublin and Cork. Irish women held up their underwear during street protests against the not guilty ruling.

Some of them said it was victim blaming and posted photos of their own underwear along with the hashtag #Thisisnotconsent on social media.

"Women, young women in particular, but older women like me, are just fed up with this kind of nonsense. I mean I have a 19-year-old daughter. Is she to question what kind of underwear she wears going out at night? I think those days are gone," one woman said.

"Consent cannot come from clothing. It can't come from a piece of material. It can only come from the person," another added.

Irish Prime Minister Leo Varadkar says he can't interfere in the way individual court cases are held. However, a review is underway to see if improvements can be made in the way such trials are conducted.