'The Bachelor' Colton brings the final 7 women to his hometown 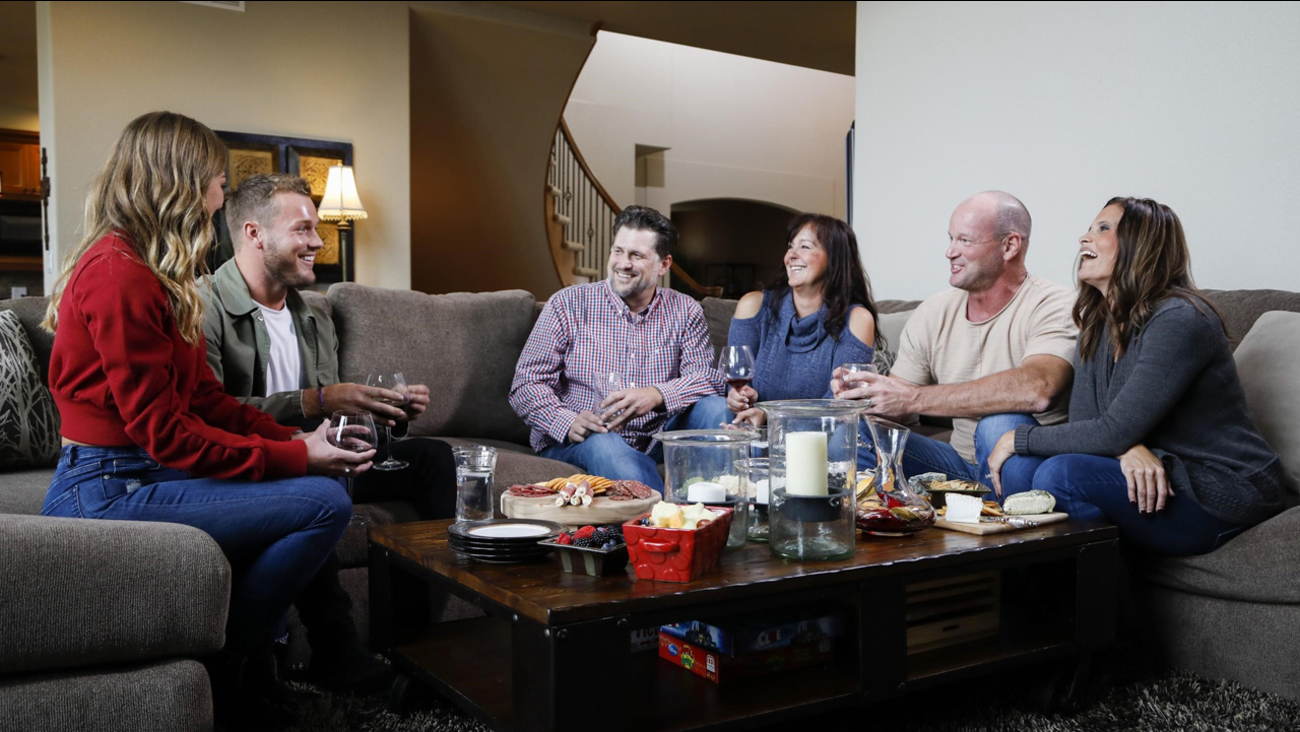 NEW YORK -- Colton began this week in Vietnam still questioning which women are there for the right reasons. Katie told him some people aren't ready and that echoed the sentiments of Sydney and Demi as they left as well last week. He's relieved though because he's headed home to Denver to see his family and hopefully get some clarity. 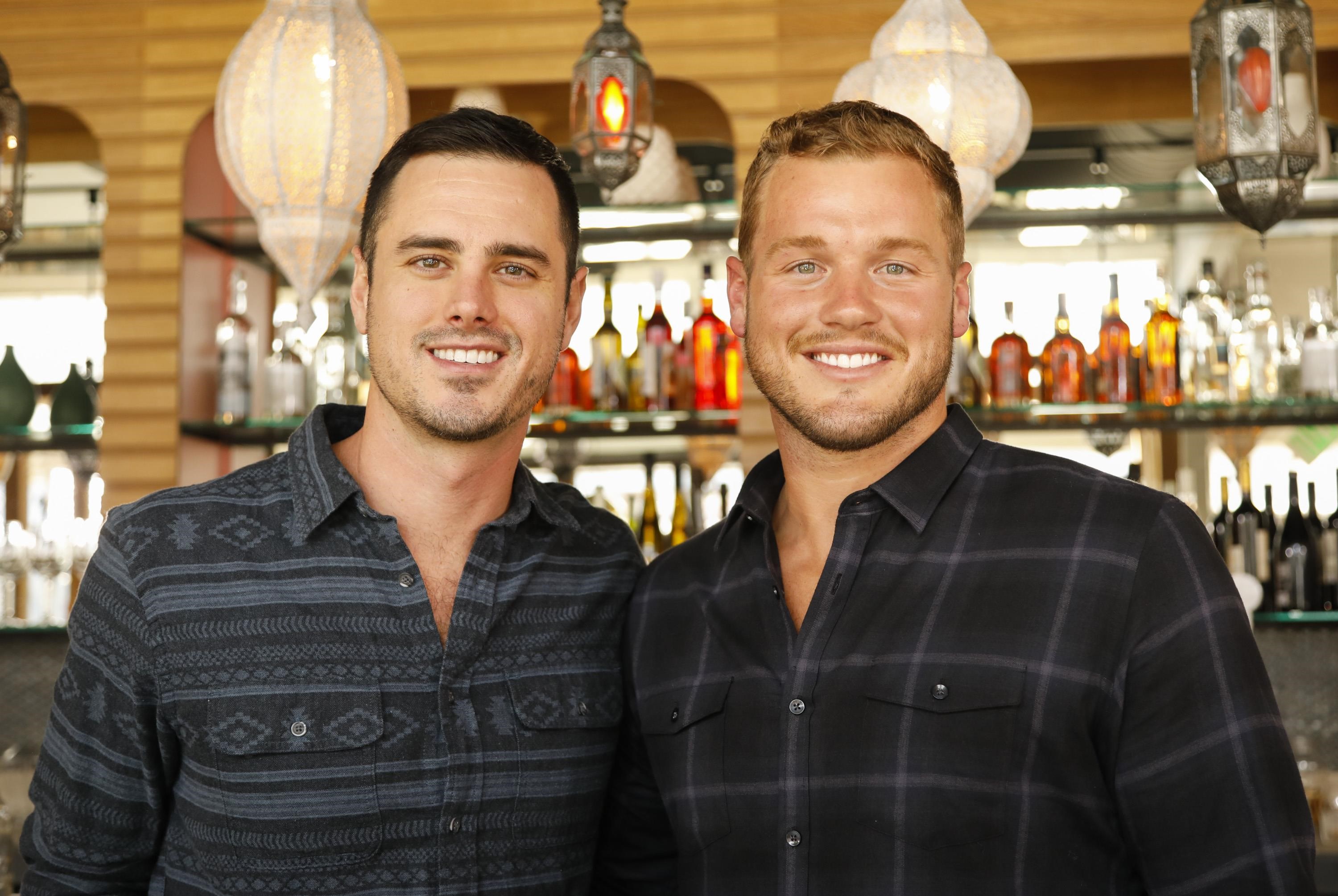 Our "Bachelor's" first stop was not to see his family or the women, but it was to see former "Bachelor" Ben Higgins. Colton explained what happened last week to Ben and Ben told him to be honest with the women. They shared some hugs and that was pretty much it. 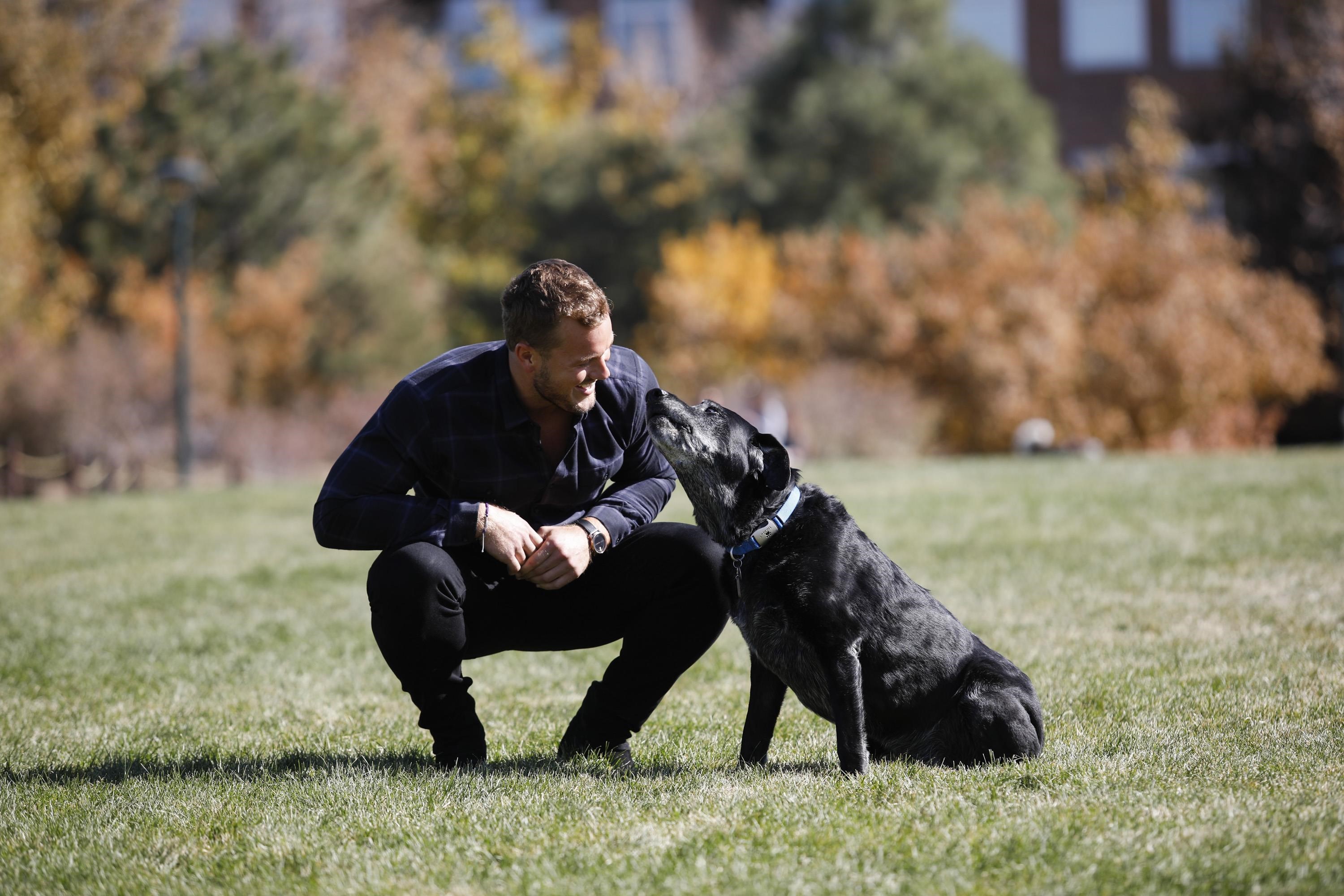 After his meetup with Ben, the women met up with Colton in a field and got to play with his dog. They were all thrilled until he announced his first one-on-one date with was Tayshia. They walked off hand-in-hand and walking his dog. Tayshia and Colton stopped at a restaurant to have some seafood and wine and then walked to an ice cream shop that was also welcome to dogs. Tayshia got a taste of what life is like with Colton and his pooch. While sitting in a marketplace that was extremely noisy, Colton asked Tayshia what he's missing. Tayshia told him that Cassie and Caelynn are the girls that everyone was referring to. She said that they aren't ready to get engaged and they are already talking about how they could be the next "Bachelorette." Also, she said they are looking forward to the parties and people they will get to know after this experience. Colton was shocked and he said this is terrifying news. This is all coming from the girl who said, "Let's take it, final two," last week to Kirpa. 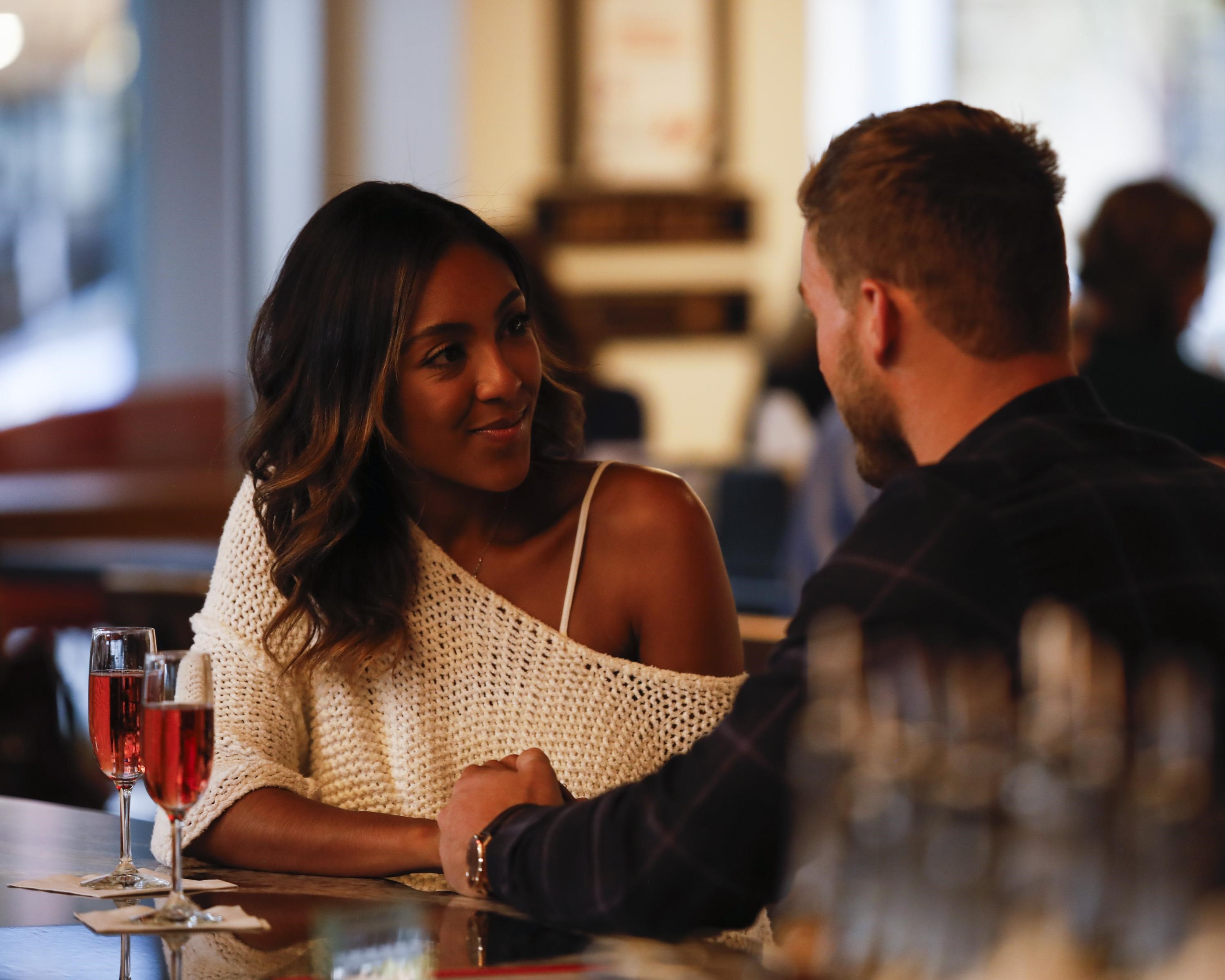 That evening, Colton and Tayshia shared some dinner and wine back at Colton's place. He asked her what it would be like meeting her family. She said her dad might be apprehensive and a bit closed off but he's pretty protective of her. She said her last relationship ending in divorce had a bit impact on her whole family. Colton said his parents, more specifically his father, is pretty old fashioned. Also, Colton said he wants the blessing of the woman's father to marry her for whoever he decides to propose to. Tayshia said that her dad would most definitely be accepting of their relationship. With those words, Colton offered her the rose, which guarantees a hometown date. She put on his jersey and they jumped onto his bed. Colton said, "This is where the magic doesn't happen." Ha! He's pretty excited about the prospect of dating her further though!

How Caelynn falls in love 🏂 with @colton #TheBachelor pic.twitter.com/JTAJ4CgCpa

A date card arrived at the hotel and it was for Caelynn. It said, "Meet me in the Rockies." The other women all cried about not getting a one-on-one. At this point, no one wants the group date. Also fresh off her date, Tayshia and Kirpa shared secrets about what she revealed to Colton on their date. Now Colton has doubts going into his date with Caelynn. Nevertheless, Colton met up with Caelynn and they went snowboarding. Once they were done having fun on the slopes. Colton flat out asked Caelynn about what Tayshia said. She said that she hates it and it terrifies her that she could lose him over something that is completely fabricated. She told Colton she's 100% ready for marriage and she is not there for "The Bachelorette." She told him that her feelings for him are very strong and that she never said anything like what Tayshia described to him.

At dinner, Caelynn was a mess and on the verge of tears. Colton was too. Caelynn decided to lay it all on the line and try her best to prove her love to him. She told him that she's falling in love with him and hoped it was enough for him to believe her. He then referenced the story she told him about her rape and how horrible that was for her, but they definitely shared a special moment. Colton said his fears about her are gone and none of that can take away from the way he feels with her and he told her that he's falling for her too! He offered her the date rose! Another hometown date was booked. 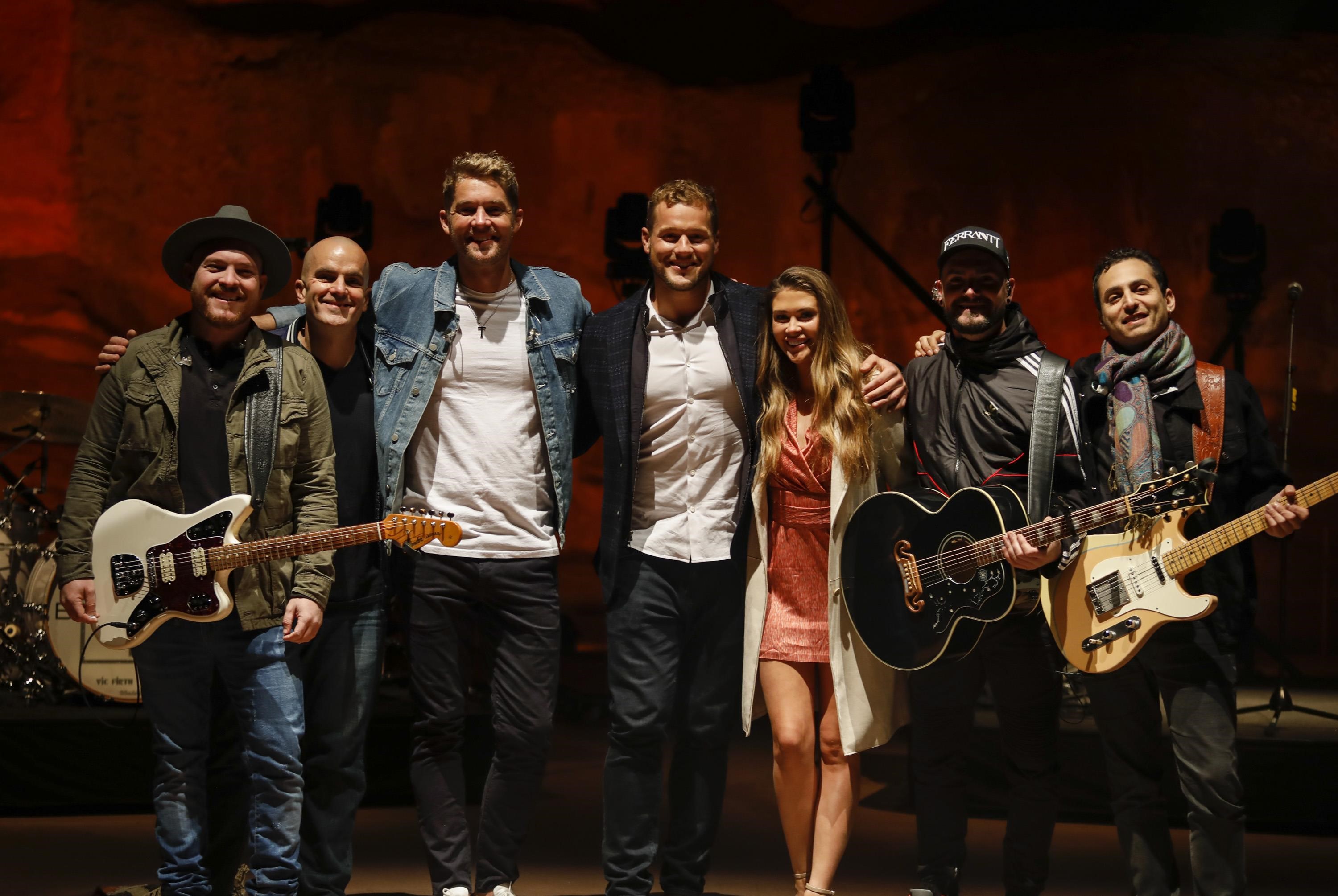 Afterward, they danced at a private Brett Young concert! If you don't know who he is, look him up! He's amazing. If he wasn't married he'd make a great "Bachelor!"

Another date card arrived and it read, "Hannah B., Home is where the heart is." That meant that Cassie, Kirpa, Heather and Hannah G. would be on the group date. Meantime, Caelynn warned Cassie that Tayshia is talking about them behind their backs to Colton. Caelynn confronted Tayshia and she tried to pin the whole thing on Katie. She said they all deduced that Katie was talking about Cassie and Caelynn, even though the two of them say they are there for Colton and committed to him, they aren't looking to be "The Bachelorette."

Colton picked up Hannah B. and took her to meet his parents! Wow, that is a big deal! And...she wore a cropped sweatshirt? That's how you make a good impression? They all sat down and chatted with her and seemed to like her. Colton's dad said that he should just trust his gut. Hannah told his mother that she told him that she was falling for him but Colton hasn't said it back to her yet. Colton even revealed to his dad that he's not there yet with Hannah. His mom kept encouraging Hannah to be open and honest and it seemed as though poor Hannah was walking into a breakup this evening. She even sensed something was off as they drove away. He seems like he just wants to get it over with.

Hannah showed up in a metallic pink dress with poofy shoulders and I don't know about Colton, but I would end it right there. Still, he told her she looked stunning. They talked a bit about how the day went and Hannah thought it went great. Colton said that he felt grateful to talk to his parents about the importance of the week. She gave him heartfelt answer after answer and none of it seemed to have a deep impact on him. Nothing she could say could get his heart to where it needed to be. He told her that he couldn't get there with her. He said he can't shake her dad's hand in her hometown if he still has doubts. Hannah B. said she laid it all out there, so there you have it. She's confused as to what he wants, but she doesn't want him to meet her family if he doesn't feel strongly about her. As she left, she told Colton to listen to what people say about the other women's intentions. She said she was upset at how everything went as she drove off in the limo.

The last date card arrived and it read "Saying goodbye is never easy." There are four girls on this group date, but now there are two roses instead of just one. The four meet up with Colton as he arrived on a steam engine. They boarded the train and got a tour of the area. Heather pulled Colton aside first once the train stopped. She said that it wasn't fair to him to take him to her hometown because she's not ready for it yet. Colton said if it's not 100% then it's the right thing to do. He offered to walk her out. She boarded the train and it took her away. The other women were shocked! Wow, Heather waited all that time for her first kiss only to cut him loose!

When the claws come out 😳 #TheBachelor pic.twitter.com/APb0S3IiH7

Kirpa told Cassie that she also heard the rumors from Katie as well. Cassie was shocked, she couldn't believe people thought she wasn't ready. Hannah G. said that she heard about it from Tayshia. Cassie and Colton had the next talk and he told her that hearing her name brought up as one that might not be ready terrified him. He was very emotional thinking about it. Cassie told him that she is ready and she is there for him. "I would not be here if it weren't for you," Cassie said. She started to cry and said that the other women made it up. She told him that she wouldn't bring him home if she didn't think that he was right for her. Colton said that he feels that she is being honest.

Kirpa followed and Colton did ask her about what was said. She told him she didn't want him to be blindsided and end up with the wrong person. She told him that Cassie and Caelynn aren't ready. She said that they were the only two girls who got defensive after Katie left. Colton is hoping that his gut is right. Kirpa told the ladies that she confirmed what Katie said. Cassie gasped. She said why would you spend your time talking about me. She said it was a lie! We didn't really get to see his time with Hannah G. so that was a bit weird. Colton said he didn't know what he wanted to do with the roses yet. He asked for an evening portion of the date.

Is anyone else glad this is the last group date? At this point in the show, they are never fun. The women wouldn't even look at each other. They sat at the dinner table and gave Colton hugs as he walked in. He pulled Hannah G. aside first. It was awkward hearing Hannah G. giggle outside as Kirpa and Cassie sat there in silence. Colton quickly returned to the room and gave Hannah a rose. There's just one rose left. Hannah returned back to the house and told Caelynn and Tayshia that Cassie and Kirpa got in a fight about the Katie gossip. Back on the date, Colton thanked Kirpa for her information. Meantime, Caelynn hiked on over to the date and confronted Colton. She told him that Kirpa is not telling him the truth. Then, she left. Colton returned to the room, picked up the rose and offered it to Cassie. He walked Kirpa out and she seemed pretty unemotional about the whole thing at first, but then cried in the limo. Colton revealed that he's falling in love with Cassie, he didn't tell her yet though, and he's very excited to meet her family.