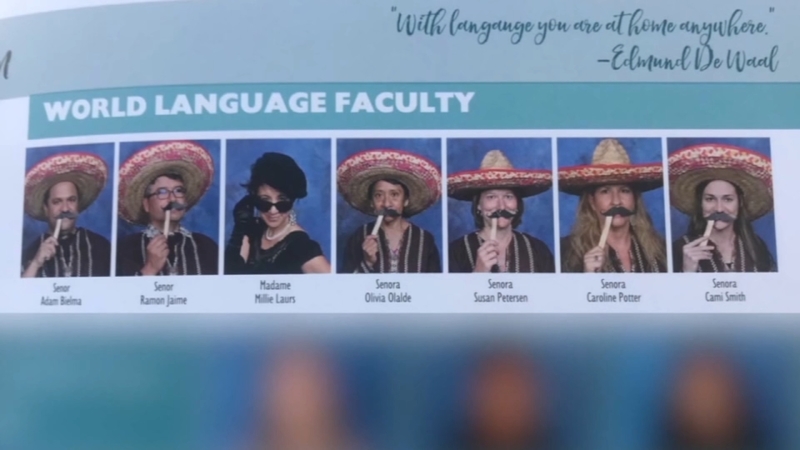 ESCONDIDO, California -- The yearbook photos of some teachers at a California high school are being called "culturally insensitive and in poor judgment" after they dressed in costume according to the language they taught.

Students at San Pasqual High identified one wearing a beret as a French teacher. The ones wearing sombreros and mustaches all taught Spanish.

The district agreed with the student, saying in the statement the pictures were "culturally insensitive and in poor judgment." It explained the "photos are a collection of pictures taken at the beginning of the year for use as teacher ID photos."

But several parents say they are withholding judgment until they know the intention of the teachers.

Merced Juarez says her son had teacher Olivia Olalde as a Spanish teacher and that Olalde cared a lot for the language and the culture.

"She's very strict, you know? But she wants them to learn Spanish, to learn their language," said Juarez, who adds she believes the pictures are taken out of context.

"They could be offensive if they're making fun of us. It could be something honorable if they're trying to honor the Mexican culture. It would be better without the big mustache and hats," said Martin Reyes, the father of a student at the school.

San Pasqual High's principal responded to the photos in a tweet, saying, "Cultural appropriation is offensive, even if the intent is not to offend, and has no place in our school. We have a lot of work to do."