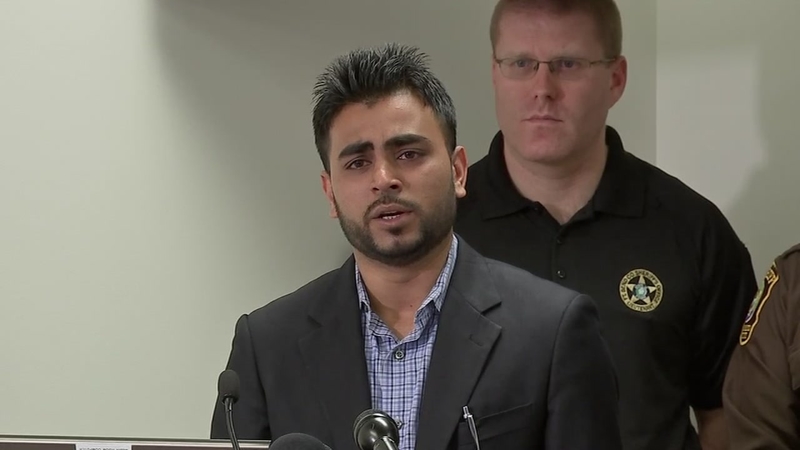 RICHMOND, TX (KTRK) -- Investigators say 17-year-old Huma Hanif was dead within seconds of the crash, the airbag sending shards of metal in her neck, severing arteries. Investigators say it was a crash she should have survived.

Faizon Hanif, Huma's brother, says his family is still in shock after her death last week on March 31.

Faizon Hanif described his sister as a cheerful person who made everyone smile and who wanted to be a nurse. According to her brother, Huma loved to help people and often took care of their parents.

Investigators say the crash should not have killed Hanif.

FBCSO's Danny Beckworth has worked accidents in the county and believes everyone should have walked away from the crash.

Now officials here want everyone to check their vehicles to see if they have recalls, especially on airbags.

The problem is not enough parts are currently available to fix the millions of recalled airbags.

For those with open airbag recalls, this advice from Sheriff Troy Nehls: "I wouldn't drive it, I wouldn't drive," he said. Nehls stated this was the tenth fatality resulting from a defective airbag.

Honda says it sent notices about the cars airbag recall, but the family says they never got those notices.

Eyewitnesses described the accident in which Huma died as minor. It happened on FM 762 and Gonyo near Richmond. The Fort Bend County Sheriff's Office says she rear-ended another car. Rudy Torres, the owner of Invisions, a barber shop on the corner, says Hanif got out of her car afterwards and collapsed.

Torres was right. After an official inspection Wednesday of the teen's 2002 civic, Honda confirms a defective Takata airbag is to blame. The inflator ruptured becoming like a missile.

Honda says it was among the 24 million airbags that have been recalled in the U.S. Their records show recall notices have been sent to the registered owner of Hanif's car, but repairs were never made. Hanif's sister told Eyewitness News she wasn't aware of any recall.
EMBED More News Videos

"They should definitely be trying harder to get those cars back," said Alicia Trevino, the last friend to see Hanif alive. Trevino, 17, says the two were best friends. Hanif had just dropped her off and was heading to work when the accident happened. With her father's permission, Trevino got a tattoo on her side Tuesday of a message about enduring friendship Hanif had written to her.

"She was a very, very special person."

Hanif, an aspiring nurse, is the second person in the Houston-area whose death has been linked to the faulty airbags. Last year, Carlos Solis, of Spring, was killed when his airbag deployed in another minor accident.

Fourteen automakers are part of the recall. To find out if your vehicle is among them, you can check your vehicle's VIN at safecar.gov.

"Our heartfelt condolences go out to the driver's family in light of this tragic death. Takata is deeply sorry for all fatalities and injuries that have occurred in any case where a Takata airbag inflator has failed to deploy as intended. Takata continues to support all actions that advance vehicle safety and is in constant and close coordination with NHTSA to enhance consumer awareness. Takata strongly urges all consumers to check NHTSA'S https://vinrcl.safercar.gov/vin/ website and contact their dealers immediately if they discover their vehicle is subject to a recall."

"During an inspection today, accompanied by representatives of the National Highway Traffic Safety Administration (NHTSA), the Sherriff's Department of Fort Bend County, Texas, and Takata, American Honda confirmed that the Takata driver's airbag inflator ruptured in the crash of a 2002 Honda Civic on March 31, 2016, in Fort Bend County, Texas, resulting in the tragic death of the driver. Our thoughts and deepest sympathies are with the family of the driver during this difficult time."

Honda has shared all available vehicle history information collected to date with NHTSA and will continue to cooperate with NHTSA throughout the process of investigating this crash.

Since 2011, the vehicle involved in this crash has been included in multiple recalls and a market campaign. Multiple mailed recall notices were sent over the course of several years to registered owners of this vehicle, including the current registered owner. Our records indicate that the recall repair was never completed.

To get alerts for breaking news, download the abc13 news app for iPhone or Android. You can also get breaking news alerts sent to you by email.
Related topics:
automotivefort bend countyrecallhonda
Copyright © 2021 KTRK-TV. All Rights Reserved.
More Videos
From CNN Newsource affiliates
TOP STORIES