York: Due process for Ray McDonald 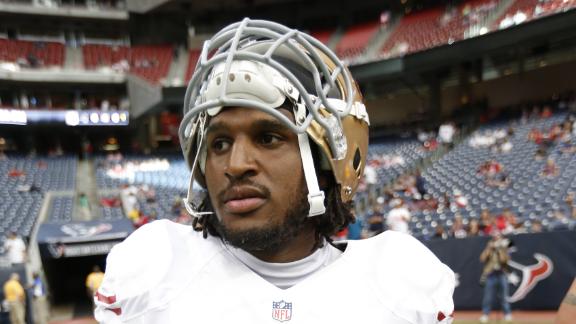 SAN FRANCISCO -- 49ers CEO Jed York said Tuesday that he will let "due process take its course'' before deciding whether to discipline Ray McDonald after the defensive tackle was arrested on suspicion of domestic violence.

In his first public comments since McDonald's arrest Aug. 31, York told San Francisco's KNBR radio that he will not punish McDonald until he sees "evidence that it should be done or before an entire legal police investigation shows us something.''

"I would much rather take shots at my reputation than to put somebody down and judge them before an entire investigation has taken place,'' York told the radio station.

York's comments echoed many of the remarks made by 49ers coach Jim Harbaugh and general manager Trent Baalke in the past two weeks. He reiterated that the team will not tolerate domestic violence and he considers McDonald's arrest serious; however, he repeatedly said he will not act until the investigation is completed.

McDonald practiced all of last week and started in San Francisco's 28-17 win at Dallas on Sunday.

Public pressure has been building on the 49ers to sit McDonald while prosecutors decide whether to charge him. The uproar escalated Monday following TMZ Sports' release of video showing Ray Rice striking his then-fiancee in an Atlantic City elevator.

The running back has been released by the Ravens and suspended indefinitely by the NFL, which initially suspended Rice two games.

York stressed that the public should not lump McDonald and Rice together just because both were arrested on domestic violence charges.

"Each case is its own separate case. Ray McDonald is not Ray Rice,'' York said. "And if there's another one, it's not the same as the previous. Each case is its own individual entity. And as a society, we have a sense of saying, 'Well, you didn't do it right with Ray Rice right away so you need to overdo it with Ray McDonald or whoever else it is.' And I don't believe that's the country that we live in. I don't think that's a fair way to approach it.''

McDonald is out on $25,000 bail following his arrest at his San Jose home, where he was celebrating his 30th birthday with teammates and friends.

San Jose police have released few details surrounding McDonald's arrest, only saying that officers at the scene saw the accuser with "visible injuries.'' McDonald's arrest came just days after NFL commissioner Roger Goodell announced tougher penalties for players accused of domestic violence, including a six-week suspension for a first offense and at least a year for a second.

Asked about Goodell's handling of Rice's situation and if he should be reprimanded by owners, York said: "It was obviously acknowledged that it was bungled by the league, and they came back and corrected it. Ray didn't take the field in the regular season. He was already down. They suspended him for the year. Could it have happened sooner? I don't understand the video, what was seen, when it was seen, how it wasn't seen. I don't know the answers to that.''

York said he hadn't spoken publicly about McDonald's arrest until now because the 49ers speak in "one voice.'' He said his views were expressed earlier by Harbaugh and Baalke, and he felt that was enough.

With multiple arrests in the past few years, York acknowledged the 49ers "haven't lived up to that expectation'' of acting in a responsible way off the field. He said the team is doing everything it can to make changes.

As far as enforcing discipline, though, York cited flaws in the league's collective bargaining agreement with the players' union.

"We certainly need to take a very hard look at ourselves as a league and figure out a better way to do this,'' York said. "Coming back to Ray McDonald, we've got a collective bargaining agreement in place that makes it difficult for the teams to take an action, for the league to take action. We need to set any negotiating aside and figure if there's a better way through collective bargaining and through everything to look at domestic violence.''