Which player had the best sneakers in the NBA during Week 7? 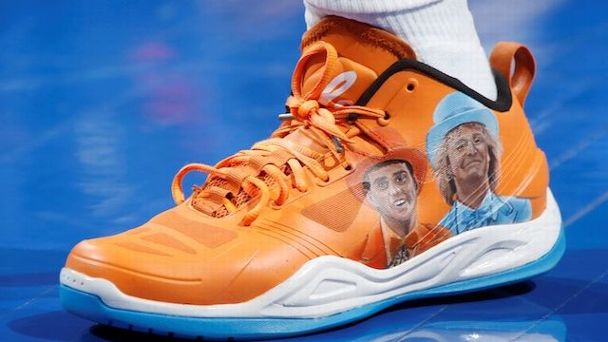 Already this season, we're seeing players take themselves less and less serious with their custom sneaker themes, perhaps none more than the first week of December.

After launching his own "LG9" signature shoe with upstart brand Q4 Sports a year ago, Detroit Pistons shooting guard Langston Galloway has been wearing a different custom painted pair for every game of the season. With the talented Andrew Lewis adding artwork to his low-cut sneaker all season, Galloway has honored civil rights pioneers, former Pistons icons and for Veterans Day, a family member who served as a Marine.

His latest pair took on a much lighter note, celebrating the classic 1994 comedy "Dumb and Dumber."

"We're trying to do all of the themes of old-school movies this year," Galloway said.

Highlighted by the infamous formal wear of characters Harry Dunne and Lloyd Christmas, each mismatched shoe takes on the orange-and-baby-blue hues of their classic tuxedos and top hats. The shoes are admittedly ridiculous, just like the movie.

While most "Dumb and Dumber"fans only like to acknowledge the original movie starring Jim Carrey and Jeff Daniels, Galloway's favorite memory from the franchise happens to be from the much-debated sequel.

"The slushie scene is my favorite, when they both get a brain freeze," he said.

After wearing fairly standard blue-and-red sneakers throughout his LA Clippers and Pistons tenures, Blake Griffin has been hitting the hardwood this season in a series of elevated themes layered in extra storytelling and additional graphics.

Thanks in part to the styling of Kelsey Amy, Jordan Brand's promo footwear designer, Griffin has been ramping up his sneaker game.

The simple gray-and-blue pair he debuted earlier this week had full-on inspiration from "The Office," one of the comedy fan's longtime favorite television shows. The heel panel features his full name in a similar undercase font, and paper clips and repurposed Dunder Mifflin logos are seen along the toe and heel. A purple bandana nod to Michael Scott's "Prison Mike" persona is found along the insole, replaced with Griffin's face instead.

"There's ways you can customize these to really display your personality," Griffin said.

After joining the Jordan Brand with Griffin in the fall of 2013, Russell Westbrook has been no stranger to loud and graphic colorways atop his many player exclusives. His latest pair celebrates "Baby Shark," a catchy viral song that originally took off in 2016.

The shoes incorporate the blue, pink and green tones of the music video, along with "Doo doo doo" verbiage from the jingle along the collar. Since launching his second signature shoe last January, Westbrook has worn themes inspired by everything from Pokemon to Game Boy, Super Soakers and classic Nickelodeon shows.

Not all was lighthearted around the league, as Portland Trail Blazers All-Star point guard Damian Lillard launched his latest signature shoe, inspired by his cold-blooded approach to closing out games.

"Early in the design process, the many sides of Dame's personality emerged during our conversations with Dame -- he's a leader, a family man, a businessman and more, but when he hits the court, a different side comes out," said Jimi Taylor, senior footwear designer for Adidas basketball.

The understated outer half of the shoe is styled in simple black and red team colors, while the inner half is accented by bold neon green and bright red. "Ruthless" is featured all across the inner midsole.

"I come out to compete against people, but I don't say a whole lot. I don't talk trash, I just go at them every opportunity I get," Lillard said. "There's a way to go about it in life and in basketball, being compassionate and ruthless. It's important to have both -- I was raised that way."

Before introducing the shoe on court, Lillard also leaned in to the visibility of his arena entry, donning a custom split suit while hand-carrying in his newest Adidas Dame 6 colorway for good measure.

With Kevin Durant ruled out for the regular season as he continues to rehab from a torn Achilles injury, fellow Texas Longhorn PJ Tucker has been looking to show love to his longtime friend by wearing a variety of Durant's older signature sneakers.

Tucker has said his KD 4 collection could last him "for every day of the month," as he took to the court in a bright neon pair earlier this week.

"I've known KD for so long, I brought him into Texas being a fellow Longhorn," he said. "We've been friends for years and I've always loved his sneakers. Our friendship is deeper than anything, but the sneaker aspect is unbelievable."

Check out all of the best sneakers from around the league this week, and be sure to vote on your favorite pair in our poll below. For real-time updates on sneaker culture and NBA kicks, follow @SneakerCenter on Instagram.
Report a correction or typo
Related topics:
sportsespnsneakershouston rocketsrussell westbrookdetroit pistonstaurean princenbablake griffinlangston gallowayportland trail blazersbrooklyn netsdamian lillardculturepj tucker
Copyright © 2021 ESPN Internet Ventures. All rights reserved.
More Videos
From CNN Newsource affiliates
TOP STORIES