Senators reinsert Craig Anderson in goal for Game 3 vs. Canadiens 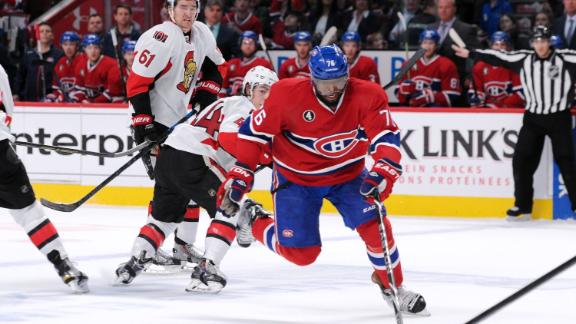 OTTAWA -- The Senators have made a goalie switch down 2-0 in their first-round series with the Montreal Canadiens, reinserting veteran Craig Anderson and benching late-season phenom Andrew Hammond.


"Coach's decision, no more than that,'' Senators coach Dave Cameron said ahead of Sunday night's Game 3 at Canadian Tire Centre.


Asked what went into the decision, Cameron responded: "What gives me the best chance to win tonight's game.''

Anderson, who has been the team's No. 1 netminder the past few seasons, hasn't played since March 29, in part because he's been hampered by a hand injury, although he's been healthy enough to back up Hammond in the past 10 games.


Anderson injured his hand Jan. 21 and then played only four games since then, all in March, when he went 1-2-1 and allowed 14 goals.


"The last few days of practice I've been able to do a lot more and push myself as far as the prior injury, there really haven't been any issues," said Anderson. "I'm really excited about how my hand feels and the improvements and strides that I've been able to work on the last few days of practice where we really focused on pushing the strength.''


Hammond went 20-1-2 after his February call-up to help carry the Senators into the playoffs in what has been an incredible run. He gave up seven goals in the opening two games of the series but was busy, stopping 39 of 42 shots in Game 2 and stopping 35 of 39 shots in Game 1.


Hammond's run appears over for now, but he took it in stride Sunday morning after the skate.


"I fully support the team's decision, it's too crucial of a juncture of the season to not have anyone pulling on the same rope,'' Hammond said.


"I support everything that's being done right now.''