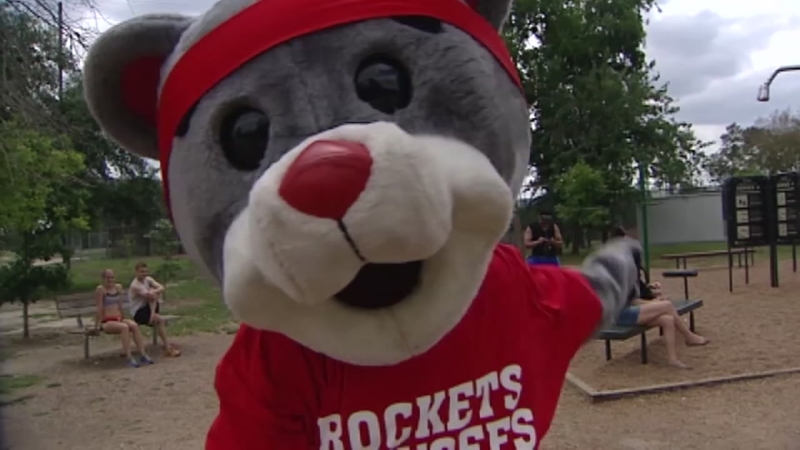 HOUSTON (KTRK) -- Sports fans from across the country will soon learn more about one of Houston's most beloved characters.

Later this year, the Mascot Hall of Fame will open in Whiting, Indiana, just outside of Chicago. The museum will feature the Rockets' "Clutch the Bear," a character Robert Boudwin knows well.

For 21 years, he was the man behind the mask of the teddy bear.

He retired two years ago, but not much has changed. Boudwin created his own mascot, Newton.

Eyewitness News caught up with Boudwin as he performed at Berry Elementary School.

The character uses magic to inspire kids in school, at home and in life. Since leaving the Rockets, his entertainment isn't only found in schools.

He's brought his outrageous antics to Sam Houston Race Park. Whether it's sumo wrestling, turtle races, or having people bet on where the track's donkeys will poop.

"Wherever Chip and Dip leave a present that night," Boudwin said. "If it's on your square, you go home with a poop emoji pillow."

It's a job skill he perfected as the Rockets' teddy bear.

"I just got to tell you, I miss it," Boudwin said. "I mean, there's definitely parts I miss."

Boudwin left the Rockets two years ago to spend more time with his kids.

"Events for mascots are all when everybody's not working there at nights and on weekends," Boudwin said. "So your appearances, you know, are happening and it, it became tough. But, uh, you know, I'm certainly a Rockets fan."

Soon, many others will learn about his former character, Clutch. More than a decade ago, Clutch was one of the first inducted into the Mascot Hall of Fame.

Right now, there are 17 professional and collegiate mascots in the hall, including the Spurs' Coyote, the Phillie Phanatic, and Aubie from Auburn University.

"I like getting trophies," Boudwin said. "I like getting awards, and I always have, but at the end of the day, when it actually happens, you're kind of dumbfounded and humbled and I know it sounds cliche, but you're just kind of left speechless."

For years, the Hall of Fame was only found online. But soon an actual $15 million museum will open.

"Whether it's virtual reality where you put the headset on and you're the mascot throwing out the shirts, or shooting silly string or dancing with the dancers," Boudwin said.
Right now, construction is underway with the goal to open by the end of the year. The opening isn't the only thing Boudwin has his eyes on.

The Rockets never won a championship while he was Clutch.

"Man, the whole city's fueling it," Boudwin said. "I mean, how amazing is this going to be if we win with the Astros for the first time ever and now we win in the same rolling year."

It's about as crazy of a story as Boudwin's journey to get Clutch into the Mascot Hall of Fame. He moved here knowing no one and only making $20,000 a year.

But soon, his hard work will be on display forever. An accomplishment he says is all due to Rockets fans embracing him.

"Without you guys, it didn't happen," Boudwin said. "And that connection that you made me feel, set aside my kids and my family, is worth the world to me. Thank you."