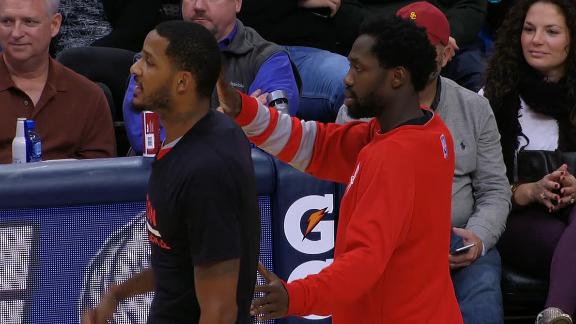 According to a source, Mejri made a derogatory comment to Ariza about Ariza's wife and children between the third and fourth quarters.

Ariza became so upset that he exchanged words with Mejri, which prompted the referees to give Ariza a technical, his second of the game, leading to an ejection.

After the game, Ariza dressed and walked toward the Dallas locker room, accompanied by two security guards. As Ariza and several Houston teammates -- including Patrick Beverley, James Hardenand Eric Gordon -- waited for Mejri, Dallas police officers already outside the locker room as part of their regular detail monitored the situation to make sure it did not escalate.

The NBA on Wednesday said it was reviewing what happened both on and off the court.

At one point, Mavericks guardDeron Williams came out of the locker room to talk with Ariza and try to calm him. Ariza, who didn't speak with reporters after the game, eventually left without further incident.

Mejri, who strongly denied to ESPN's Tim MacMahon that he said anything about Ariza's family, knew Ariza was waiting for him outside the locker room.

Earlier, Beverley, who didn't play, was sitting on a cart yelling at Mavericks coach Rick Carlisle, who was leaving his news conference.

"Don't be mad at us, Coach," Beverley yelled at Carlisle, who didn't respond to Beverley. "Way to be an icon, Coach. Have a nice season, Coach."

It was not clear what specifically upset Beverley, but he posted a tweet after the game:

Mejri tweeted Wednesday that he is "committed to have mutual respect to every player on the court" and that he would "never insult an opponent's family."

The Rockets were not happy about the game, which included eight technical fouls, two flagrant fouls against the Mavericks and one ejection.

"I don't know what they were on tonight," Harden said. "That other team was tripping tonight. They were disrespectful, were unprofessional players and coaches. I don't know what was their problem, but I think that got us going. They wanted to throw a little cheap shot and just woke us up a little bit, and it was over from there."

Andrew Bogutwas equally frustrated upon receiving a flagrant foul 1 during his return after missing 11 games with a right knee injury. The call came in the second quarter near the end of a 16-0 Houston run that broke a 37-all tie. Harden doubled over after running headfirst into the 7-foot, 260-pound Bogut's shoulder.

"If you watch the replay, yeah, he made no effort to run around my screen,'' said Bogut, who had a couple of sharp verbal exchanges with Harden. "Yeah, it was a hard screen, and I set hard screens. But to get a flagrant for it is kind of head-scratching.

"You admire the effort the league's putting in in Secaucus [New Jersey] with that beautiful facility where they watch replays and watch TV and have leather chairs and all that kind of stuff. But you scratch your head at a lot of these things, and it becomes very, very frustrating.''

Information from The Associated Press was used in this report

What led to Ariza wanting to confront Mejri after game?
ESPN Rockets reporter Calvin Watkins explains the latest on Trevor Ariza, who waited outside the Mavericks' locker room after he claimed Salah Mejri made derogatory comments about Ariza's wife and children.
Related topics:
sportsespndallas maverickssalah mejrilocker roomchildrenwifehouston rocketsnbatrevor ariza
Copyright © 2022 ESPN Internet Ventures. All rights reserved.
TOP STORIES
Daylight shows home destroyed after standoff with shooting suspect
What we know about man accused of shooting 3 HPD officers
Clouds clearing today, sunny through the weekend with rain next week
5 people charged in connection with Pct. 5 corporal's murder
How many times can I reuse my N95 mask?
Decades after TV anchor disappears, convicted rapist denies connection
Driver dies after slamming into 18-wheeler's trailer on US-59
Show More
Woman shot in the shoulder during robbery set up in SW Houston
Prepare for a major closure at I-69 and 610 West Loop this weekend
Officers escort body of corporal killed in ambush to funeral home
ABC13 obtains HPD scanner traffic of chase that led to shootout
'Tiger King' Joe Exotic resentenced to 21 years in prison
More TOP STORIES News