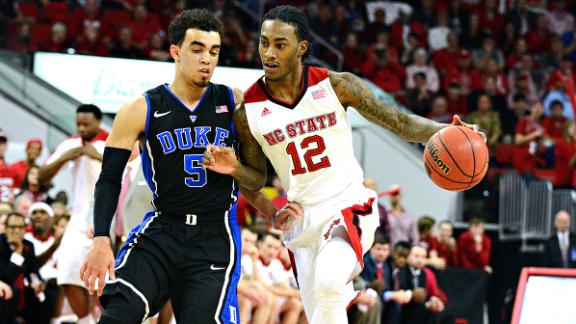 RALEIGH, N.C. -- Kyle Washington hopped on a courtside table to celebrate amid a crowd of North Carolina State fans jumping around at midcourt. Anthony "Cat" Barber posed with fans taking selfies amid the chaos.

The Wolfpack had turned No. 2Duke's latest visit to Raleigh into yet another party -- complete with ending the Blue Devils' unbeaten start.

Trevor Lacey scored 21 points and N.C. State shot 55 percent to beat Duke 87-75 on Sunday, knocking off one of the last three undefeated teams in the country.

"Today we just all put it together and we just played as a team," Lacey said. "When we play like this, we're a good team."

The Wolfpack dominated a second-half stretch with seven straight scoring possessions to build a 19-point lead -- Duke's biggest deficit all season by far -- then turned away the Blue Devils' late comeback.

It marked the second time in three seasons that an unbeaten Duke team visited Raleigh and headed to the locker room as the rowdy home crowd stormed the court to celebrate afterward.

"Were we as tough as we needed to be? No," coach Mike Krzyzewski said. "Does that mean we're soft? No. We're a good team. We need to learn to play at that level. You've got to be in these things to learn it."

Okafor finished with 23 points and 12 rebounds, but the Blue Devils shot 37 percent and just couldn't keep up when N.C. State's offense got rolling.

Ralston Turner scored 11 of his 16 points after halftime, including two straight 3s to break open a tie game. And BeeJay Anya added a career-high 14 points to lead a strong effort from the Wolfpack's big men, whose development has been a big focus of Mark Gottfried's staff.

"We got the ball inside and our big guys were productive," Gottfried said. "I think any time with any team ... the more productive guys are around the basket, it opens everything up on the perimeter."

Quinn Cook scored 18 points for Duke, which missed 20 of 27 3-pointers and couldn't make it through a pair of instate ACC road games unscathed this week. The Blue Devils had a tougher-than-expected win at Wake Forest on Wednesday.

"These two games just taught us that we can lose," sophomore Matt Jones said, "if we don't bring our game every day."

Duke: Jones started over Amile Jefferson in Duke's first lineup change this year. ... Jones' 3 with 1:37 left got Duke as close as 76-69 late. ... Duke had never trailed at halftime or by more than six in any game before Sunday.

N.C. State: This marked the first time since 1992 that N.C. State played consecutive games against top-five opponents. The Wolfpack lost at No. 3 Virginia on Wednesday. ... N.C. State shot 58 percent after halftime. ... The largest lead came at 72-53 on Lacey's 3 with the shot clock winding down at the 5:43 mark. ... Freshman power forward Abdul-Malik Abu had eight points and eight rebounds.

N.C. State came in ranked 12th nationally with 6.1 blocks per game. The Wolfpack swatted 10 against the Blue Devils, four apiece from Anya and Washington.

Duke has now lost four of five in PNC Arena, including a 2010 loss to the Wolfpack -- again, with a court-storming celebration. Duke also lost to Mercer here in last year's NCAA tournament opener. "I've never won here," said Cook, Duke's lone scholarship senior. "I'm 0-3. It's just a bitter taste in my mouth about this building."

NC State Shocks No. 2 Duke
Trevor Lacey scored 21 points to lead NC State to a 87-75 win over Duke and hand the Blue Devils their first loss of the season.

NC State Shocks No. 2 Duke
Trevor Lacey scored 21 points to lead NC State to a 87-75 win over Duke and hand the Blue Devils their first loss of the season.