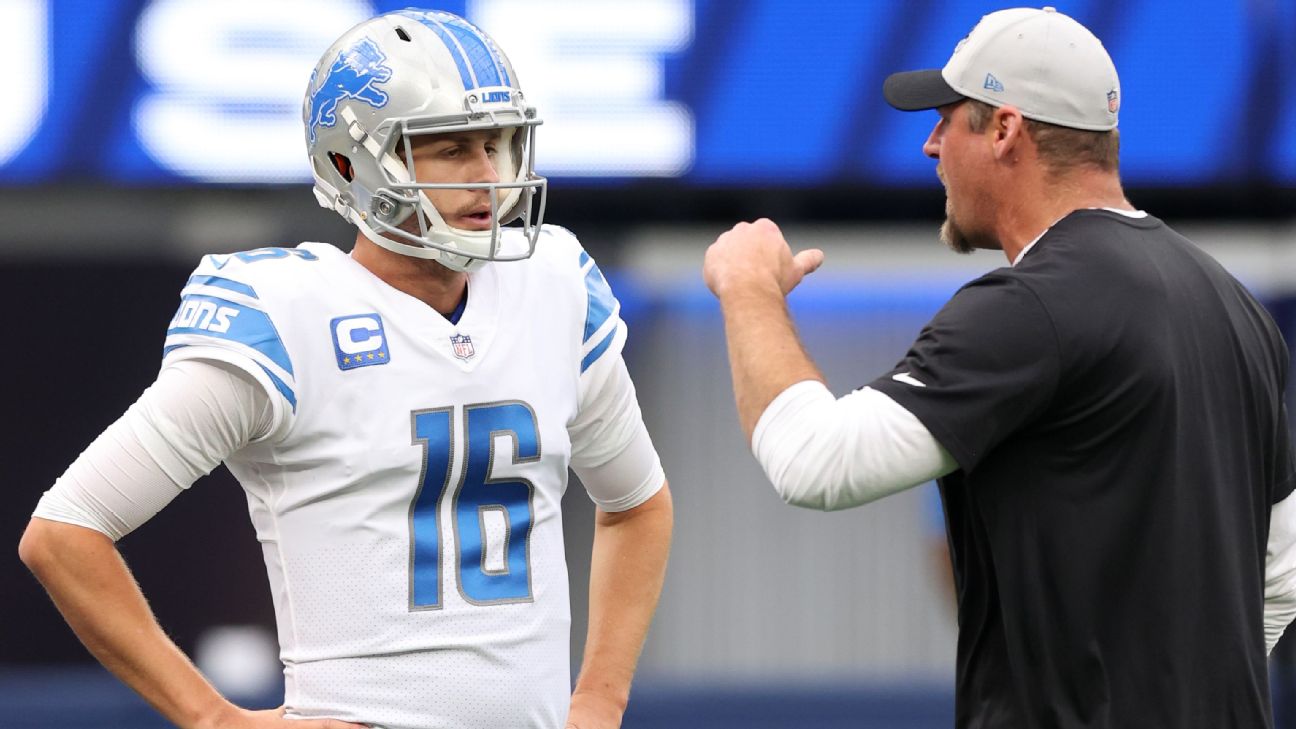 We're only seven weeks into the 2021 NFL season, and the 2022 draft remains half a year away. At least 10 games remain for every team, and we won't know the draft order or what this upcoming prospect class will really look like for quite some time. But it's never too early to start thinking about the draft, and that's especially true for teams in position to land an early pick on Day 1.

Using our ESPN Football Power Index(FPI), we identified six teams with at least a 30% chance of having a top-five selection next April: the Lions, Jets, Texans, Jaguars, Eagles and Giants. Four of those teams are set to have multiple first-round picks, as well. We then asked our NFL Nation reporters a key question at this point in the draft process, as those six franchises keep an eye on the future.


Which teams could be looking at a quarterback? Which teams have needs all over the roster? And which GMs have big decisions to make in the coming months? Let's jump in, starting with a key question for Detroit.

Has the Lions organization seen enough from Jared Goff to definitely go QB in the first round next April?

No. That's certainly not the case. Goff has had his struggles this year, but Lions coach Dan Campbell still feels that he hasn't been able to fully evaluate Goff with so many missing pieces around him, including offensive tackleTaylor Decker, center Frank Ragnowand receivers Quintez Cephus and Tyrell Williams, among others. However, that doesn't excuse a season which Goff describes as being "up and down."

Furthermore, this year's quarterback class isn't as encouraging as last year's group, without many immediate game-changers, so Goff could be the Lions' guy for at least another season. Detroit could decide to go with an edge rusher with an early pick and then possibly draft a receiver later in the first round -- the Lions also have the Rams' first-rounder -- to continue to equip Goff with some better weapons. -- Eric Woodyard

The Jets have used all five of their first- and second-round picks over the past two years on offense. Will GM Joe Douglas continue to build on that side of the ball, or is it time to focus on the defense?


Douglas has a defensive-minded coach, Robert Saleh, so that might be a clue for next April. The Jets have pressing needs in the back seven, especially at linebacker. Cornerback could also be a priority, depending on how rookies Brandin Echols and Michael Carter II perform the rest of the season, and LSU'sDerek Stingley Jr.might be too good to pass up there.

Safety could be on the list, too, assuming Marcus Mayeisn't re-signed. And finally, the Jets already have a lot of money invested in the defensive line, with Carl Lawson and John Franklin-Myers, but Saleh and Douglas love, love, love building in the trenches. -- Rich Cimini

Do you see Houston going quarterback all the way at the top of the draft, or is it more likely that the Texans go best prospect available?

A lot depends on what happens before the draft with quarterback Deshaun Watson or any quarterback who might come back to the Texans in a trade. But if Houston's quarterback situation remains the same this offseason, and there's not a quarterback who stands out at the top of the draft, it seems likely that the Texans draft the best player available instead.

Houston has had only one first-round pick since 2018 and has holes everywhere on the roster. Even if the Texans have the top pick in April, the team isn't a quarterback away from winning a Super Bowl. This rebuild in Houston will take some time, so it makes sense for general manager Nick Caserio to take the best talent on the board rather than rushing to take a QB. -- Sarah Barshop

How can the Jaguars continue to build around QBTrevor Lawrence with their first-round pick next April? What positions could need the biggest boosts?

Pick a position on offense. With the possible exception of running back -- they haveJames Robinson and Travis Etienne Jr. there-- the Jaguars need upgrades everywhere.

They need a playmaking (and speedy) receiver to complement Marvin Jones Jr. and Laviska Shenault Jr, They've pretty much ignored tight end until trading for Dan Arnold, but he's not the long-term answer. And they might have to replace three starting offensive linemen, including left tackle Cam Robinson.

The offense is averaging 19.3 points per game and hasn't scored more than 23 points in any game so far this season. Plus, the offense lacks explosive plays; the Jaguars have just eight runs of 20 or more yards or receptions of 30 or more yards. -- Michael DiRocco

If the Eagles end up with theIndianapolis Colts' pick and have three first-rounders, would they be better off using all three to build up the roster, or using that draft capital to land a QB?

That depends largely on their evaluation of Jalen Hurts, who has been inconsistent through seven games this season. Coach Nick Sirianni has listed accuracy and decision-making as two of the top things he looks for in a quarterback. Hurts will likely have to show improvement in those areas between now and the end of the season for Sirianni to be convinced Hurts is the guy.

It's rare to have that many first-round picks, and nothing is more important than getting the QB position right, so if the Eagles can use those picks to find a long-term solution at the position that they feel would be a significant upgrade over Hurts, they should do it. -- Tim McManus

*IfCarson Wentzplays at least 75% of the Colts' offensive snaps this season, or the Colts make the playoffs and Wentz plays at least 70% of the snaps, Indianapolis' 2022 first-rounder goes to Philadelphia.

What's more likely to happen for the Giants: QBDaniel Jones plays well down the stretch, the team picks up his option and builds around him with two first-round picks, or the team is in the 2022 QB market, even if Jones is on the roster?

Jones has played well already this season, even if his numbers aren't flashy. With the competition lightening and his supporting cast improving (some of the injured playmakers will get back on the field), it seems likely the Giants' offense and Jones will only get better in the second half of this season.

The Giants are also way more sold on Jones than outsiders want to believe, especially with another year of low cost on his rookie deal in the offing. All of it makes the Giants unlikely to be in the 2022 QB market. -- Jordan Raanan 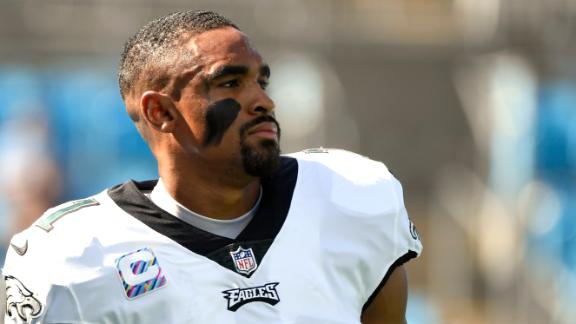 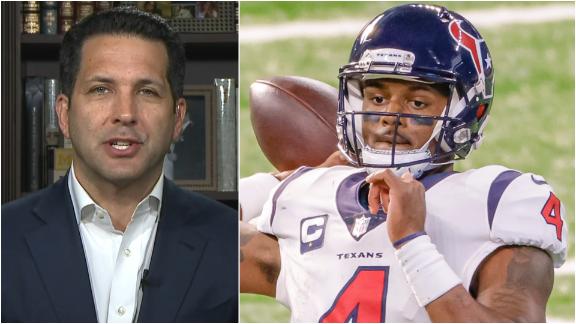 Could a Watson to Miami trade happen this week?
Adam Schefter details the latest on the possibility of Deshaun Watson being traded to the Dolphins as soon as this week. 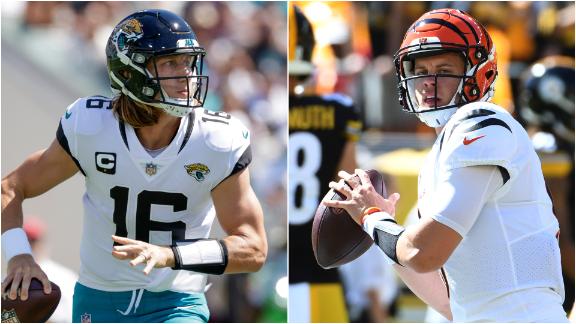