MLB awards roundtable: Who will take home the hardware and why 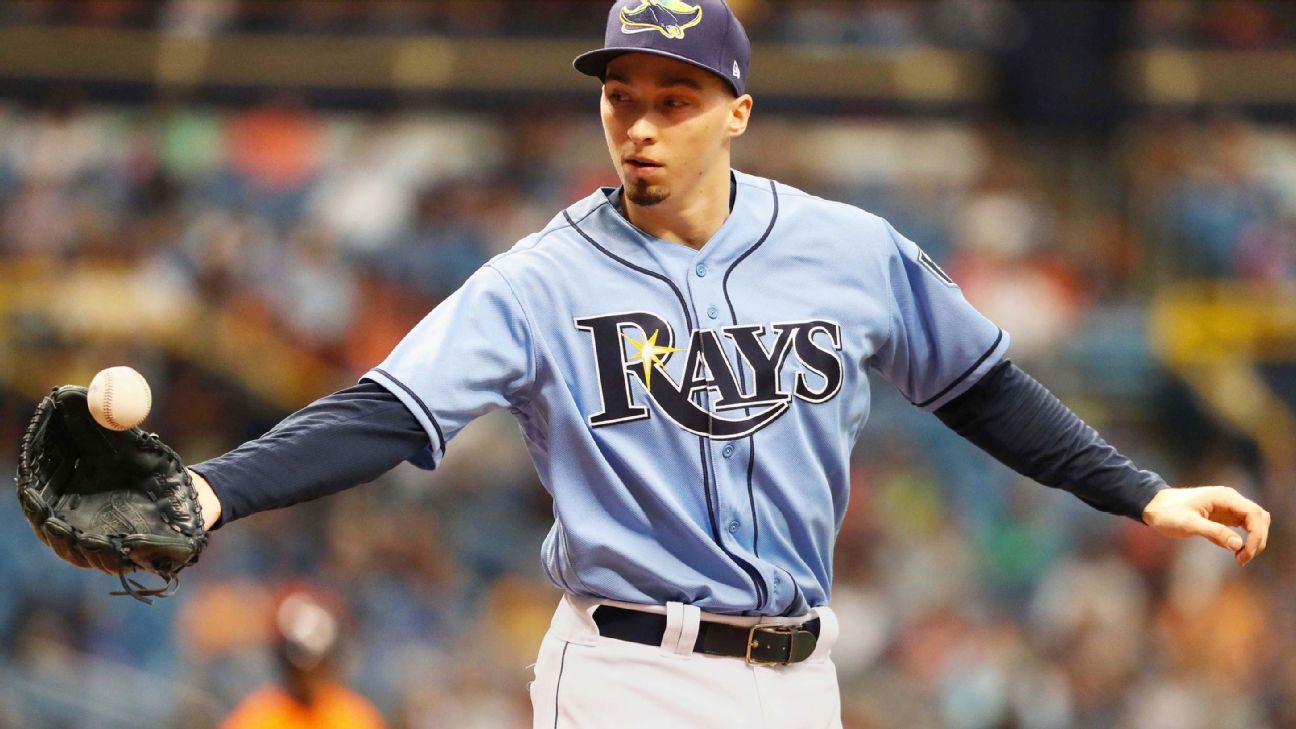 In advance of the announcements, we asked some of our analysts for their takes on who would win and their insights on the top contenders.

Rookie of the Year

Is there any way Vlad Guerrero Jr. doesn't win this award in the AL next year?

Schoenfield: Sure, he'll be the overwhelming favorite and should be called up early in the season, but there could be other impact rookies like Kyle Tucker, Forrest Whitley and Josh James with the Astros; Eloy Jimenez of the White Sox; Jesus Luzardo with the A's; maybe Brent Honeywell of the Rays if he's back from Tommy John surgery. Vlad Jr. will have to rake, and if his defense falters, that could open the door for a better all-around player to win.

Matz: Absolutely. In fact, Guerrero won't even be eligible for the award because the Blue Jays will inexplicably decide to keep him in the minors for the entire year -- again. But he will become the first minor leaguer to hit .500 over a full season. So there's that.

Miller: Yes. There are a lot of ways! He is the favorite but probably an underdog against the field, even granting that the elite minor league talent is concentrated on National League farms right now. It's hard to put a ceiling on what Eloy Jimenez might do, though.

Langs:Heading into this year, Acuna for NL ROY seemed like a foregone conclusion. Instead, we had him and Soto neck-and-neck, and we won't be certain he will win until it is announced Monday. Given that, I'm hesitant to hand next year's AL award to Vlad Jr. We never know who will come up a year earlier than expected and rake.

What do you think the next five years will look like for Ohtani?

Schoenfield:He wants to hit and pitch, and I still think the Angels will give him every opportunity to do that once he returns to the mound (most likely in 2020). You can argue that he showed enough with the bat that he should just become a full-time DH/outfielder, but he had No. 1 potential as a starter before the injury. I wonder if he eventually settles in as a DH/relief pitcher to maximize his plate appearances and limit his overall innings.

Matz: Can he take the physical challenge? Man, this is an impossible question to answer. He could win a pair of Cy Youngs. Or the Angels might decide to scrap the whole pitching thing and he never throws again. In which case he could win a pair of MVPs. Or the Halos could choose to scrap the whole hitting thing. I'll go out on a limb and say that Ohtani quits baseball altogether and joins the Lakers, where he spends the next five years averaging 17 points, 8 rebounds and 4 assists, all while helping LeBron win a pair of NBA titles.

Miller: A lot of uncertainty about how best to use him. Next year is simple: Let him hit, let him rehab from Tommy John surgery. After that, there just isn't ever going to be an easy answer, and it'll be fun -- but controversial -- seeing how the Angels adjust to his fluctuations in health and age.

Langs:I think he'll be primarily a hitter and, if his performance this year was any indication, a pretty good one. I don't know if the league had the requisite time to figure him out since he was hitting, pitching and then out for an extended period of time. He may not remain a phenom, but he showed he can contribute to the Angels.

Manager of the Year

Did Blake Snell's winning 20-plus games play any part in your AL prediction?

Schoenfield:I think it's a minor factor. Most impressive -- and important -- is that his 1.89 ERA was the third lowest in the AL in the DH era and just the fourth to crack a sub-2.00 ERA. Verlander had more strikeouts, but leading the AL in ERA and wins is a tough combo to beat in awards voting.

Miller: Yes, not so much because I think voters feel tied to win totals -- see the National League prediction -- but because the 21 wins made Snell's season look more complete. Otherwise, his low innings total might have been held against him. Another factor is that Chris Sale came up four innings shy of qualifying for the ERA title. I don't know that one or two more starts would have won it for Sale, but he was probably the league's best starting pitcher on an inning-by-inning basis.

Langs:Not at all. His 1.89 ERA in 31 starts, 32 percent strikeout rate and all he did throughout the season are what convinced me. I don't even look at the wins column.

Which stat was the biggest factor in the NL Cy Young race?

Schoenfield:Well, deGrom's 1.70 ERA speaks for itself. He allowed just 10 home runs in 217 innings. We know it's not his fault he won just 10 games. What really seemed to get all the attention -- and rightfully so -- is that he allowed four runs just once all season. He finished the season with 29 consecutive starts of three runs or fewer. Incredible.

Matz:Innings. I would say ERA, but in a vacuum, ERA doesn't carry the day. Just ask Snell, whose unmatched run prevention in the AL will be overshadowed by his relatively light workload. But in the NL race, deGrom's 1.70 ERA holds up because his 217 innings were second best in the league and only three fewer than Scherzer.

Miller: It's definitely the ERA. DeGrom had the best fielding independent pitching, the best deserved run average, he was the best pitcher, but I don't think he'd have won the Cy Young with that record even if all the other stuff were true unless he had the eye-popping ERA, and 1.70 -- the sixth lowest of my lifetime -- is that.

Who do you think will win?

Schoenfield:Mookie Betts and Christian Yelich pulled away in the end in what had been crowded races.

Matz: For the fourth time in seven years, Mike Trout finishes second behind a guy whose team won a division title. But that's not why Betts is the MVP. He's the MVP because he was better than Trout. But not by much. In the NL, Yelich's monster finish sealed the deal.

Miller: Betts in the American League, Yelich in the National.

Langs:I think it'll be Yelich in the National League and Betts in the American League. Yelich almost won the Triple Crown -- it's hard to argue with his production throughout the entire season. And Betts managed to distance himself from the pack, even with another candidate (who will likely finish fourth or so) on his own team in J.D. Martinez.

If Mike Trout had played the full season, do you think he would have won?

Schoenfield:I don't think so, although it might have made for a much closer vote. He hit .312/.460/.628. Mookie hit .346/.438/.640 -- and remember, Betts played four fewer games than Trout. Sure, if Trout had played 155 games, he probably would have passed Betts in WAR, but voters still prefer to give the award to a guy on a playoff team, and Mookie still edges out Trout in that scenario.

Matz: Depends. If Betts had played the full season (folks forget that he missed time, too), then no. But if Trout didn't get hurt and Betts played only the 136 games that he played, then yeah -- Trout would win.

Miller: No, not this year, not with the Angels out of contention again. Trout probably would have led the league in WAR again -- as he has done every full season he has played -- but Betts was unbelievably valuable (Troutlike, really) and considerably more clutch with his offense, so even a lot of statheads probably would have cheered his case.

Langs:Yes. I don't believe I've seen a season from Mike Trout where I didn't believe he very likely could have won the award if healthy for the whole year. Early in the season, Trout was yet again on pace for career highs. This is just what he does. As it is, he's just the third player with six top-three MVP finishes in a seven-season span, according to Elias, joining Yogi Berra and Albert Pujols.

J.D. Martinez isn't in the top three: Is that a snub or evidence of how deep the AL field was this season?

Schoenfield: It was an incredibly deep field. There was a lot of whining after Martinez didn't make the top three, but he didn't finish in the top five in WAR at either Baseball-Reference or FanGraphs. As great as he was at the plate, Trout and Betts still beat him in OPS, and he obviously doesn't have the same defensive value as those two (let alone Jose Ramirez, Francisco Lindor, Matt Chapman or Alex Bregman). The RBI total was fancy, but the defense matters.

Matz: Neither. It's proof that in an era where positional versatility is valued more than ever, a guy who plays in the field only every third game -- and not particularly well, either -- can't hold a candle to the true two-way studs.

Miller: The latter. Martinez can really hit. Really, really hit. There are years that Martinez would have topped my ballot with the numbers he put up, but this year there happened to be six incredible candidates -- players who hit and field and run and play premium positions and (except for Trout) were on playoff teams -- who weren't J.D. Martinez, and all three WAR models agree that he's just below that tier.

Langs:I think it's evidence of a crowded AL field. It might have been different had he not been teammates with Betts -- maybe they wouldn't have split votes as much. Ultimately, I see the argument for each of the top three, so I don't think it's as simple as just calling it a snub for Martinez. And there's always the fact that playing DH for a portion of your year can hurt in the MVP argument.