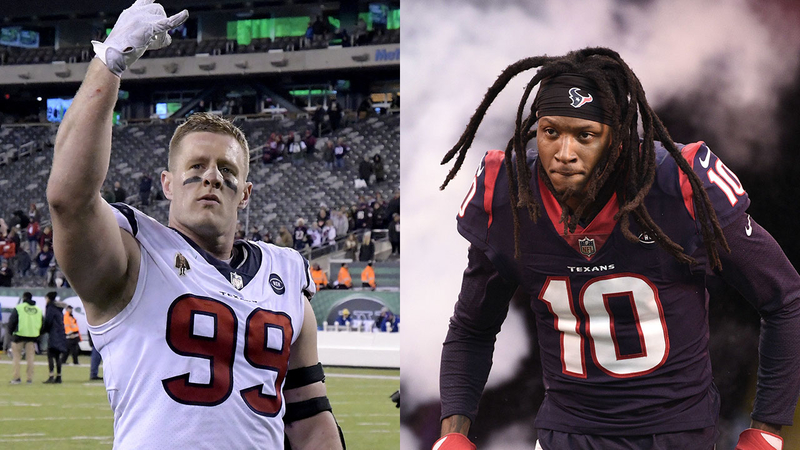 HOUSTON, Texas (KTRK) -- The Houston Texans will send four members of their AFC South-leading squad to this season's Pro Bowl.

The team announced Jadeveon Clowney, DeAndre Hopkins, Benardrick McKinney and J.J. Watt were voted into the annual NFL all-star game, which is set for Jan. 27, 2019 in Orlando, Florida.

In a sign of Houston's dominance over the division, four alternates were also named: Deshaun Watson, Lamar Miller, Tyrann Mathieu and Kareem Jackson.

With three Pro Bowl selections on the defensive side, Houston's D is getting recognized. Houston is in the top 10 in pass defense. Through 14 games, the Houston defense racked up 39 sacks, as well as 13 interceptions, which is good enough for ninth in the league.

Clowney, who earned his third straight Pro Bowl selection, is tied for ninth in the league in tackles for loss and tied for 10th in the AFC in sacks.

McKinney garnered his first ever Pro Bowl selection, with his eye-popping 96 total tackles on the season.

J.J. Watt marks his return to the all-star game. He took down four straight selections from 2012 to 2015. He has 54 tackles and 14.5 sack, as well as a single-season franchise-record in forced fumbles with six, so far.

Deandre Hopkins is the lone Texans offensive player to earn a nod, which is his third. On the stat sheet, he's hauled in 94 catches for 1,321 yards and 11 touchdowns. But the way he makes the impossible catches has consistently made him stand out from the league's top wideouts.
Report a correction or typo
Related topics:
sportshoustonnflhouston texans
Copyright © 2021 KTRK-TV. All Rights Reserved.
More Videos
From CNN Newsource affiliates
TOP STORIES