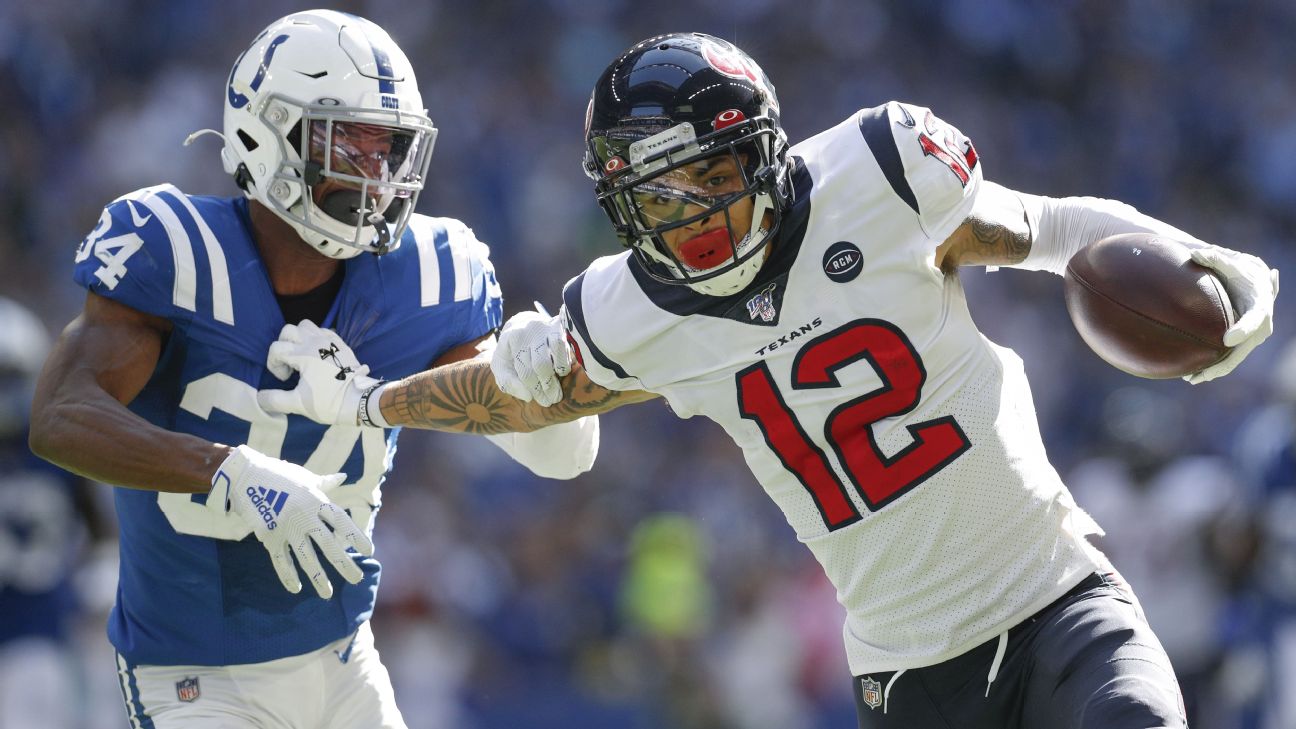 Each week of the NFL campaign, we will sift through the deeper options at each position with an eye on identifying streaming fantasy commodities with valuable matchups to consider.

Do you need replacement options for injured or suspended players? Or are you merely dealing with depth issues? We have a few names to consider for those seeking widely available options at each position:

Mason Rudolph, Pittsburgh Steelers (16.6% rostered; vs. Dolphins)
Only the reeling Falcons have allowed more fantasy points per game to opposing signal-callers than the Dolphins. A major influence on their generous pass defense metrics is the fact Miami has pressured quarterbacks on just 17.2% of dropbacks, the lowest rate in the NFL. Rudolph, meanwhile, has the NFL's fourth-highest touchdown rate (6.7% of attempts) when operating from a clean and unpressured pocket.

Assuming he gets another week behind center as the Saints head into a Week 9 bye, Bridgewater is in a strong spot to produce against a Cardinals defense that has ceded the fourth-most fantasy points per game to enemy arms. He has a stellar rate of 7.92 yards per attempt while playing in the Superdome, the ninth-best passing clip at home among NFL quarterbacks this season. Given the pace the Cardinals play with, additional possessions could see Bridgewater's brilliant stint in place of Drew Brees conclude with some real fantasy fun.

Ty Johnson, Detroit Lions (63.9% rostered; vs. Giants)
Not to be confused with the Phoenix Suns' combo guard, this Johnson was a sixth-round pick out of Maryland in April. A complementary back in college, he thrived as a big-play asset for the Terrapins, with 7.6 yards per carry and 11 yards per reception in a change-of-pace role. He flashed as a receiver against the Vikings last week and compiled nearly 60 yards from scrimmage on 14 touches. This endorsement is more about an inviting upcoming matchup and the sheer value of the role Johnson should assume in place of injured starterKerryon Johnson than Johnson's own skill set. The Giants have surrendered 115.3 rushing yards per game to backfields, sixth most in the league, setting up Johnson as a viable flex candidate for Week 8. He's the most-added player on ESPN Fantasy this week, but it's worth checking to see if he's still available in your league.

Kenyan Drake is rostered in nearly 80% of leagues, but it's Walton who has become the team's lead early-down option in recent weeks. Drake still claims strong share of the passing work out of the backfield, but Walton seems poised for a majority stake of early-down touches, as last week's 14-attempt showing against Buffalo revealed. The Steelers have been respectable in defending the run (3.82 yards per carry allowed to tailbacks), but if Walton can consolidate goal-line work rather than seeing Kalen Ballage serve as a vulture, there is some appeal here in deeper leagues based simply on opportunity rates.

Another committee back worth considering this week is Jones, who has surfaced as the best playmaker from the Tampa backfield despite still being in a weekly competition for work with Peyton Barber. There is undoubtedly risk in deploying him, but there is also some hope the staff recognizes his momentum heading into the bye with more work this Sunday; in the three games leading into Week 6's tilt with the Panthers, Jones tallied 259 yards from scrimmage and two touchdowns. Tennessee is respectable against the run in allowing just 4.04 yards per tote to backfields, but it has been gashed in the passing phase to the tune of 54 receiving yards per game to running backs, the fifth-highest such allowance in the league.

The Bucs are allowing 203.8 receiving yards per game to receivers. Tampa ranks 32nd in defending receivers this season -- the league average is 162 yards per game. Streaming shares of this duo could prove rewarding this week thanks to both the savory matchup metrics and the recent shift behind center for Tennessee that saw Ryan Tannehill allocate 23% of all targets to Davis and 27% of his attempts for Brown, the highest rate for either in a game this season. If Tannehill continues to afford such rich usage to this duo, strong box scores will follow.

Leading the Texans in air yards per target in Week 7 in place of an ailing Will Fuller, Stills trails only Fuller on the season in air yards per target. This advanced stat focusing on air yardage merits mention since depth of target significantly influences the value of a specific target; not all targets are equal, as Stills' average target has traveled 13.6 yards this season (second on the team to Fuller's 14.6), while Keke Coutee's average target has traveled 7.4 yards. Afforded such valuable vertical work in the Fuller role could propel Stills to a strong showing against a Raiders secondary yielding 41.3 fantasy points per game to receiving corps (fifth most) and 15.9 yards per catch to wideouts, the most among AFC teams.

Auden Tate earned consecutive nominations in this space the past several weeks and now it's Erickson who has stepped up in the wake of yet another injury to the Bengals' receiving corps. Since John Ross was injured, Erickson has vaulted from special-teams contributor to earning the second-most routes on the team the past two weeks. His Week 7 breakout against the Jaguars could very well be an outlier performance, but those in deeper PPR formats might want to give him a look given the potential for another heavy workload if game script tilts pass-heavy for Cincinnati -- something quite possible as 13-point road 'dogs.

Chris Herndon, New York Jets (25.4% rostered; at Jaguars)
A hamstring injury at the tail end of his four-game suspension has kept Herndon from seeing the field this season. Inviting in the Jets' passing game right now might seem bold, but thankfully they don't play the Patriots again this season and next face a Jaguars back seven that has been gashed by the pass this season (263 yards per game). There was a valuable rapport between Herndon and draft class peer Sam Darnold last season that could revive this week in North Florida.

Since Ryan Fitzpatrick has resumed the helm of the offense, Gesicki has compiled consecutive solid showings in amassing 92 yards the past two weeks. Targeted on 23.9% of his routes the past two weeks compared to just 11% in the first four games, this shift in usage could prove rewarding against a Steelers defense that has allowed 57 yards per game and a catch rate of 71.7% to tight ends this season, both above averages allowance rates.

Detroit Lions (14.5% rostered; vs. Giants)
This one is admittedly bold given the Lions just posted a game that saw them allow 42 points to the Vikings without registering a single sack or takeaway. Then again, this matchup-driven fantasy position is quite sensitive to context and next up is a struggling Giants offense that has turned the ball over on a league-high 27.9% of drives the past month (league average is 13.9%). Facing a green signal-caller prone to daring downfield attempts, the Lions are a fun boom-or-bust group to stream this weekend.

With 17 total fantasy points in ESPN standard leagues during their past two performances, the Colts' D/ST is starting to thrive thanks to an improved pass rush and simply by getting healthier. The return of Darius Leonard boosts this dynamic front seven ahead of this meeting with a Denver team that just allowed the Chiefs' low-end defense to look like the '85 Bears. Joe Flacco, for reference, has not responded well to pressure this season; he's netting just 0.67 yards per dropback with zero touchdowns when pressured this season.

Wesley Woodyard, Tennessee Titans (4.8% rostered; vs. Buccaneers)
Corralling Jones and Tampa's playmakers on Sunday will be Woodyard, a savvy veteran with a penchant for splash plays. In place of an ailing Jayon Brown, Woodyard has seen his snap rate leap the past two weeks and subsequently has delivered 12 total tackles, a sack and a forced fumble during the past two games. If Brown (groin) isn't able to suit up this week, Woodyard is once again a sound streaming option.

Eric Reid, Carolina Panthers (13.0% rostered; at 49ers)
It's prudent to seek out productive defenders coming off of the bye week, as fantasy managers often need to cut bait on such players as Reid when they get the week off. He has produced at least six tackles in four straight appearances and has three splash plays (one sack and two fumbles) during this sample. Facing his former team, Reid should be on the field and up in the box often en route to another solid box score.

Justin Houston, Indianapolis Colts (17.6% rostered; vs. Broncos)
Keeping with the theme of facing Flacco, Houston has been a major part of the Colts' pass-rush revival in recent weeks, with three sacks and several more pressures during the past two appearances. If Houston is rostered in your league, look to the 49ers' Arik Armstead as another emergent pass-rusher to consider. 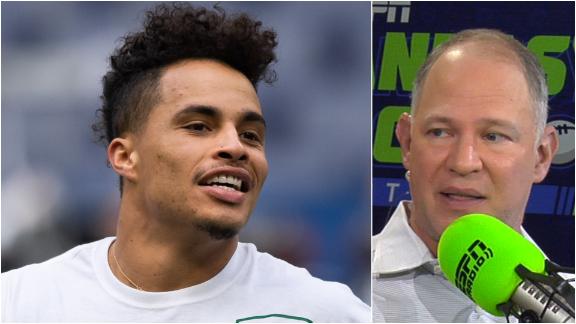 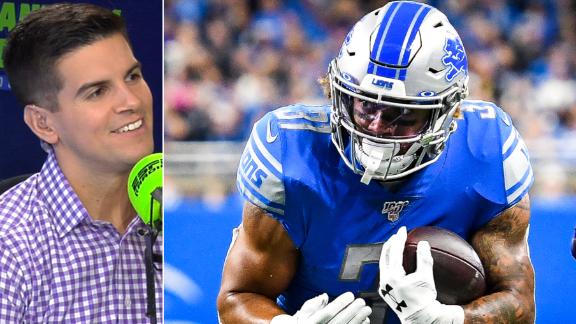 Yates likes Ty Johnson the most out of Lions backfield right now
With Kerryon Johnson injured, Field Yates is high on Lions rookie Ty Johnson, but he does caution that Detroit could another running back. 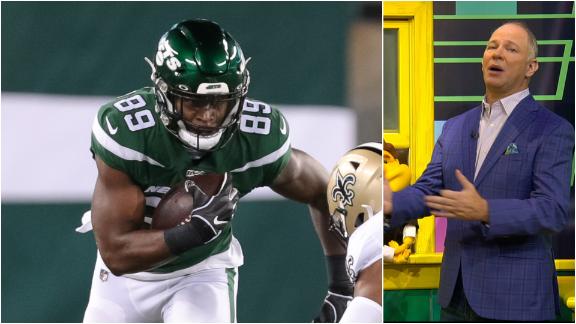 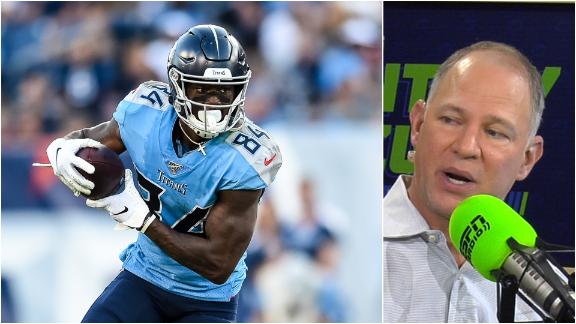 Berry: Davis 'would be my No. 1 pickup' if he was available
Matthew Berry explains why he would choose Corey Davis over Mohamed Sanu and Kenny Stills off the waiver wire this week. 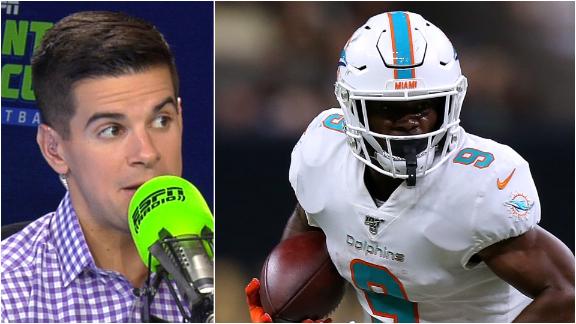