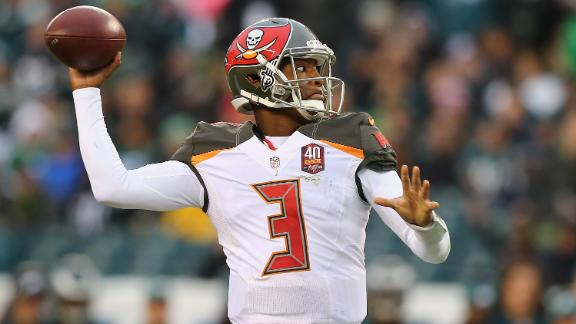 PHILADELPHIA -- Tampa Bay Buccaneers quarterback Jameis Winston tied the NFL record for passing touchdowns in a game by a rookie with five in a 45-17 victory over the Philadelphia Eagles on Sunday.

Winston connected with five receivers on scoring plays in his record-setting afternoon. The other rookie quarterbacks to accomplish this feat were the Lions' Matthew Stafford (2009) and the Bears' Ray Buivid (1937).

Winston tied the record with touchdown No. 5 -- a 5-yard strike to Cameron Brate -- with 5:13 remaining in the third quarter. He alsotied Steve DeBerg, Brad Johnson and Josh Freeman for the Bucs' record for touchdown passes in a game.

"It's just another day that I was blessed with," Winston said. "I have a baseball mentality. Today, I went 5-for-5. You never know what the next day holds. You've got to get better every single day."

Winston threw a career-high four touchdown passes in the first half. After hitting Mike Evans from 4 yards out for a first-quarter touchdown, Winston threw scoring passes of 13 yards to Vincent Jackson, 4 yards to Russell Shepard and 14 yards to Charles Sims in the second quarter.

"We are watching a young quarterback grow before our eyes," Evans said. "... Nothing surprises me or the team. We knew what we were getting when we drafted him with the first overall pick. He is a hard worker, fun to be around and has great leadership, and it shows every day, on and off the field."

Winston, who became the first Bucs rookie quarterback to toss four TD passes, finished the half 13-of-18 for 147 yards and a 135.9 passer rating.

"He's playing good ball, making all the right decisions," coach Lovie Smith said. "No one works harder than him."

Winston's resiliency leading to wins
Cary Chow and Field Yates break down the Buccaneers' 45-17 win over the Eagles.