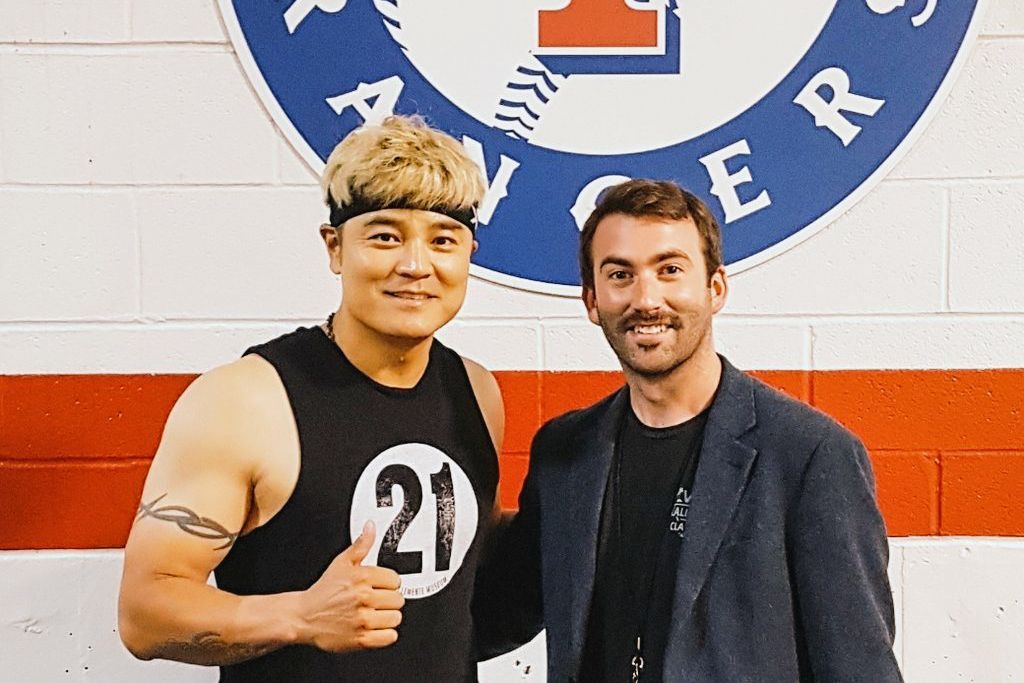 AS FANS STREAMEDthrough the Hard Rock Café at Yankee Stadium and into the ballpark's Great Hall -- the billion-dollar stadium's palatial foyer -- a text arrived from Joey Mellows. He was hungry.

"I haven't had anything since lunch," Mellows wrote. "Yesterday."

Mustachioed and understated, Mellows has a thin frame and thick British accent. He came from Portsmouth, England, where baseball was nothing more than a sport for Yanks. Mellows now sat among them, scoring games and setting his fantasy team, subsisting on hot dogs and light beer.

Mellows, known as "The Baseball Brit," had been on the road for 99 days. On this Bronx Saturday, when the Yankees take on the Astros, he watched his 75th game during that span. His plan? To see 162 -- a full-length season -- in seven months. A Ruthian feat, indeed.

That's why Mellows hadn't just been roaming the major league circuit; he had been through the minor and independent leagues, to the College World Series and to games in both South Korea and Japan, where he started his journey in March by attending the season-opening games between the Mariners and A's in Tokyo.

"I like adventure. I like travel. This trip really is as much a road trip that I always wanted to do across the USA, since I was a little boy, since I started watching American movies," Mellows said. "Then, when I got into baseball that gave me a focus every day."

He has kept track of his journey in an online calendar. After 2019's first Yankees-Red Sox series here in April, Mellows was in North Carolina the next day taking in the Fayetteville Woodpeckers' home opener. In May, he caught a four-game weekend series between the Rangers and AL West-leading Astros in Houston, then was at Constellation Field, home of the Sugar Land Skeeters, for Margarita Monday.

Likewise, his off-day obstacles have been marked matter-of-factly. Tornado disruption. Traveling quirks have been recorded for posterity. Night in Lee's Summit. He might have slept on a couch or in his car. He said he's learning so much about the United States and its culture; Mellows enjoyed the South, even though he had to stop in Natchitoches, Louisiana, for a whiskey to calm his nerves after driving past a gator-filled swamp in a downpour.

After this game, he will head home to see the Yankees and Red Sox play in the London Series, a two-game set on June 29 and 30 (10 a.m. ET on ESPN). They will be the first regular-season MLB games played in Europe. For baseball to catch on there, it'll need much more publicity, Mellows said. He hopes his trek -- and his social media footprint from it -- at least has put the sport on the U.K.'s radar.

"It has to be much more visible," he said. "I'd be surprised if too many of my friends from back home in Portsmouth know what Mookie Betts looks like or what Giancarlo Stanton does for a living. There needs to be more media coverage."

In this regard, Mellows has served as a one-man baseball lobby. At the Yankees game, he wore the teal T-shirt of the Atlantic League's High Point Rockers; he was there for their inaugural game in May. He finally arrived from Philadelphia and plopped down at a low-slung table in the middle of the Hard Rock. The side of fries ordered for him was consumed in an instant.

If he looked weary, it's because he had recently completed a road swing -- Amarillo to Albuquerque to Denver to Omaha -- even the heartiest minor leaguer would find onerous. He wasn't a fan of the sport growing up. In fact, his father, Mick Mellows, was a professional soccer player for Portsmouth FC in the 1970s. But half a world away was where he became smitten with baseball.

IN APRIL 2015,Joey Mellows fell in love by accident.

Mellows' family flew to Seoul, South Korea, where Mellows had been for almost a year. He led the social studies department at the South Korean branch of Dulwich College, a British school. The time difference made it difficult for him to keep up his European soccer fandom. He said he was looking for a way to fill the sporting void in his life.

After spending about two weeks in South Korea, the group decided to vacation in Japan, where they ran out of things to do.

"My dad is into sports as well," Mellows said. "And he was watching TV and said, 'Why don't we go to a baseball game?'"

Before he knew it, Mellows was in the stands watching the Orix Buffaloes play the Chiba Lotte Marines in Osaka. It was different from anything he had ever seen. Fans carried brass instruments, blowing trombones to celebrate run-scoring singles.

And then there were the numbers. He wanted to know what they all meant, scattered on the scoreboard. He returned to South Korea, a baseball-crazed nation in its own right, and began watching the sport as often as he could. As a result, Seoul's Jamsil Baseball Stadium has become his all-time favorite place to watch a game. He liked bat flips and hasn't yet wrapped his head around the unwritten rules that dominate baseball in the U.S. But he wanted more of all of it in his life.

So, during the 2018 season, he embarked on a precursor to his current journey; he left his teaching job and attended 75 games, including 41 in the independent leagues. He used the South Korean version of a severance package to fund the trip.

"I wanted to see players who played the game for the love of it, rather than the money," he said.

After Mellows visited last year's winter meetings in Las Vegas, Dulwich called again. They needed teachers for their high school in Zhuhai, China, just outside of Macau. Mellows aborted his trip on one condition: he was allowed to teach his new students up until their exams in March and then leave for the even bigger 162-game journey. Dulwich agreed.

However, a few weeks before he set out for Tokyo, Mellows was hospitalized in China. The ulcerative colitis he had been battling for years flared up. Instead of flying directly to Japan, he went home first, bedridden. According to Mellows, colitis made him realize his once-in-a-lifetime trip was worth it.

Mellows said he has been saving for 10 years -- for a car, a mortgage, a wedding -- but hasn't paid for any of them. Instead, he's just about spent a decade's worth of savings on baseball. What do his parents think?

"I'm not sure I want to ask them," Mellows said. "They probably think I'm super weird, like my friends do. I'm over here sounding weird, looking weird, doing something weird.

"But personally, I'm having a great time."

MELLOWS GOT UP from his chair at the Hard Rock Café and greeted a man in a Yankees jersey. The man is a podcast host and well-known member of Yankees Twitter-dom, who goes by "JJ from the Bronx."

Mellows had been on JJ's Twitter food show, "Stadium Eats," after JJ saw him interviewed on television. JJ found Mellows' background interesting and wanted to show him how to watch baseball in the Bronx and what to eat while doing it.

"I got to spend a few innings just talking baseball with him," JJ said. "He has as much knowledge of the game as anyone who didn't grow up with it on TV every day."

In addition to his stops in the lower levels of the game, Mellows has made it to 14 MLB ballparks thus far and hopes to get to all 30. Camden Yards is his favorite. But he loves to go to Tropicana Field, where he can peruse the Ted Williams Museum and Hitters' Hall of Fame.

As a spectator, Mellows has sat behind a bachelorette party in Colorado, witnessed Atlanta's tomahawk chop and, most memorably, was a guest of Astros general manager Jeff Luhnow, whose wife had gotten in touch with Mellows on Twitter. "I saw a bunch of weird mathematical equations that I didn't understand," Mellows joked about his time in Houston's offices.

He has met players -- the Astros' Collin McHugh and Alex Bregman to name two -- and become a celebrity in the baseball world. Mellows said that, more often than not, teams have reached out to him if they hear he's on the way. Sometimes, they've comped him tickets, to his great appreciation.

That's why, Mellows lamented, he might have to call in a favor if he's going to make it to Game No. 162. He'll need to attend postseason games. But will he be able to afford it? And what about ticket availability?

"I might be on the blower to Jeff Luhnow," he said with a smile. 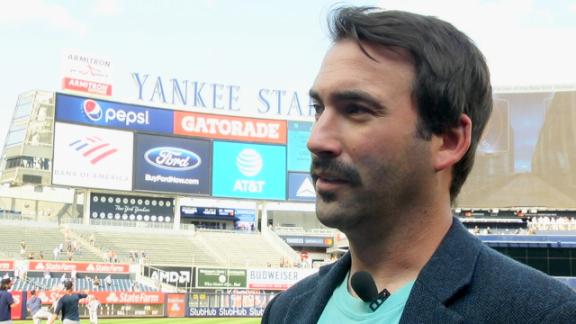 'Baseball Brit' on a mission to promote interest in baseball
Joey Mellows, aka the "Baseball Brit," speaks with Coley Harvey about the importance of baseball and his mission to witness 162 games this year. 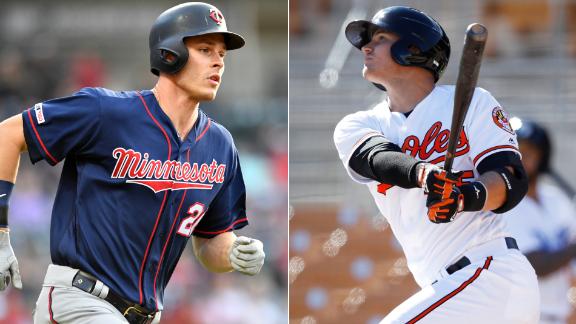 Kepler, Cervenka leading charge to grow baseball in Europe
European-born baseball players Max Kepler and Martin Cervenka share their unique journeys, with Kepler being the face of the game's latest expansion into Europe.

Yankees' logo represents more than baseball
Sam Borden chronicles the popularity of the New York Yankees' brand globally, with some people not knowing the Yankees are a baseball team. 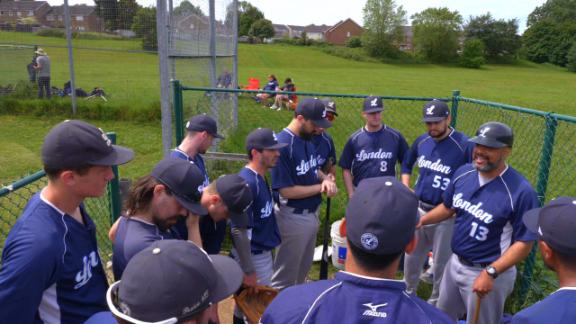 Does England have the appetite for baseball?
Baseball is hardly popular in England, but with the Red Sox and Yankees coming for the weekend, maybe the appetite can change.
Report a correction or typo
Related topics:
sportsespnboston red soxmlbnew york yankeeslondon serieshouston astrosbaseballjoey mellowseurope
Copyright © 2020 ESPN Internet Ventures. All rights reserved.
More Videos
From CNN Newsource affiliates
TOP STORIES