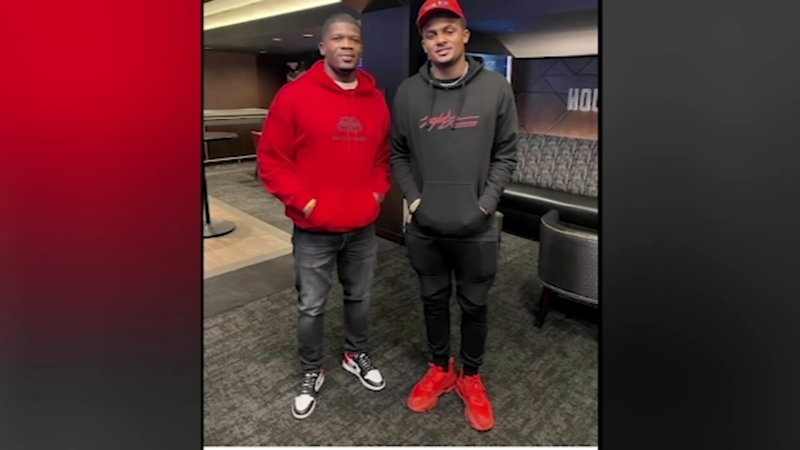 HOUSTON, Texas (KTRK) -- Hours after former Houston Texans wide receiver Andre Johnson spoke up about the team's dealings with current franchise quarterback Deshaun Watson, Johnson was spotted at the Rockets game with him.

Johnson, who is known for being more reserved when it comes to social media, used his platform to give Watson advice Tuesday afternoon in a rare showing of candor.

Watson, 25, has reportedly requested a trade from his beleaguered team, who finished 4-12 this past season among a myriad of other issues, including trading arguably one of the best wide receivers in the game, DeAndre Hopkins, to the Arizona Cardinals, and the later firing of head coach Bill O'Brien, who engineered the deal.

"STAND YOUR GROUND!!!" Johnson said in the caption of his photo with Watson at the game.

The remark was a double down on his comments posted earlier in the day Tuesday on Twitter.

Johnson wrote, "If I'm [Deshaun Watson] I will stand my ground. The Texans organization is known for wasting players' careers," Johnson tweeted, taking a jab at the team he's caught passes for during a 12-year stint of his career.

If I’m @deshaunwatson I will stand my ground. The Texans organization is known for wasting players careers. Since Jack Easterby has walk into the building nothing good has happened in/for the organization and for some reason someone can’t seem to see what’s going on. Pathetic!!!

Johnson continued, criticizing a key front office executive who has drawn scrutiny in both the media and the Texans' fan base.

"Since (executive vice president of football operations) Jack Easterby has walk (sic) into the building nothing good has happened in/for the organization and for some reason someone can't seem to see what's going on," Johnson said.

If there is anyone who knows a thing or two about the Texans organization and who would be in position to guide Watson about his athletic career, it would be Johnson.

The retired receiver owns the Texans' franchise records in catches, receiving yards, and receiving touchdowns. He also is the first inductee of the team's Ring of Honor.

WATCH: Has Deshaun Watson made up his mind?

The Houston Texans' franchise quarterback Deshaun Watson is pretty unhappy with his team, but has he made up his mind? ABC13's Sports director Greg Bailey sat down with former Houston Oilers QB Warren Moon to talk it out.

Johnson was selected to six Pro Bowls and named to two NFL All-Pro teams, but never got close to postseason success in Houston. In addition, he has played under four different head coaches over the course of his time with the Texans.

Over the weekend, ESPN's Chris Mortensen reported Watson is still angry about the Texans' "insensitivity to social justices, including hiring practices," alluding to the team failing to interview top head coaching candidate Eric Bienemy, an offensive coordinator with the Kansas City Chiefs.
Mortensen went on to report that Watson could be considering waiving his no-trade clause included in his $156 million contract to play with the Miami Dolphins.

Reports about Deshaun Watson's unhappiness with @HoustonTexans are accurate and sources close to the QB say he is still angry about team's insensitivity to social justice, including hiring practices, after the franchise failed to interview Chiefs OC Eric Bienemy this past week.