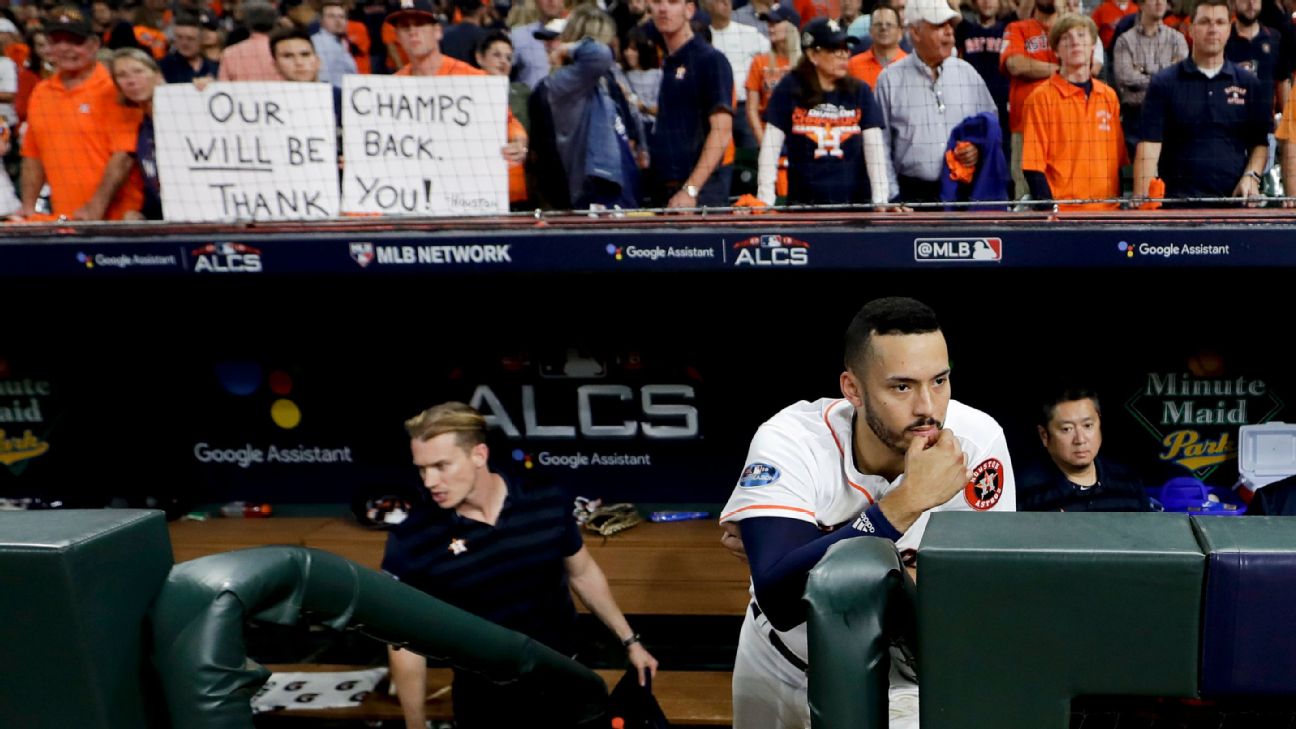 ESPN
By Eddie Matz
HOUSTON -- Instead of toasting again, the Houston Astros are toast.

With a 4-1 loss to the Boston Red Sox in Game 5 of the American League Championship Series, the Astros' bid to repeat as World Series champs is officially over.

"To be honest with you, this year's team is better than last year's team, I believe," said third baseman Alex Bregman, who reached base 10 times in the first three games of the series, but went 0-for-9 in Games 4 and 5. "The ball's got to bounce your way in the postseason. It's tough, and we'll learn from it. Everyone in here will have a little bit of an edge to play with next year, a little bit of a chip on their shoulder, knowing that we believe we should have been back-to-back champions."

Houston was trying to become the first team since the 2000 New York Yankees to win back-to-back rings. It was a quest that started back in mid-February, when the Astros kicked off their title defense amid a swirl of controversy.

The day before Houston's first spring training workouts, MLB Network host Chris Russo proclaimed that the Yankees, who'd acquired reigning National League MVP Giancarlo Stanton during the offseason, were the team to beat in the AL. Later that day, Astros ace Justin Verlander took exception on Twitter, where he posted the message, "I can think of a reason why." When Houston reported for Grapefruit League duty the following day, Verlander elaborated on his response.

"The American League goes through us," said Houston's hurler at the club's West Palm Beach complex. "Obviously, the old saying, to be the best, you've got to beat the best, and I think we proved we were last year."

Although the Astros' 103 wins during the regular season were three more than New York's total, they finished with the second-best record in the majors behind the Red Sox, who won 108 games. Anchored by Verlander and offseason trade pickup Gerrit Cole, Houston's pitching staff worked to a 3.11 ERA, best in the bigs. The offense, which had to withstand injuries to reigning MVP Jose Altuve and star shortstop Carlos Correa, ranked sixth in scoring.

Despite being pushed by two surprising AL West rivals in the Oakland A's and Seattle Mariners, the Astros spent all but three weeks in first place on their way to their eighth division crown in franchise history. They then swept the Cleveland Indians in the American League Division Series, outscoring them by a combined score of 21-6. That set up a playoff rematch with the Red Sox, who were eliminated by the Astros in last year's AL Division Series and had beaten the wild-card Yankees 3-1 in this year's division series.

As fate would have it, it was Verlander who got the start Thursday in the contest that sealed Houston's fate as the second-best team in the American League this season. Entering Game 5, the veteran righty had a pristine track record in elimination games. In five career do-or-die starts, he was 4-1 with a 1.21 ERA. He had gone 24 consecutive innings since the last time he allowed a run in an elimination start, tied with Madison Bumgarner for the longest such streak in MLB history.

After throwing up two more scoreless frames to start Thursday's contest against the Red Sox, Verlander finally yielded a run in the third inning. Facing Boston slugger J.D. Martinez, the Astros hurler threw an 0-2 slider that appeared to be a strike but was called a ball by plate umpire Chris Guccione. On the very next offering, an 81 mph curveball, Verlander surrendered a home run to Martinez, who sent the pitch over the left-field wall and off the Conoco Phillips sign to give Boston a 1-0 lead.

The score stayed that way until the top of the sixth, when Verlander allowed a double to Mitch Moreland to start the inning. Ian Kinsler followed with a single, and then 21-year old Rafael Devers hit an opposite-field three-run homer that just barely cleared the wall in left field and landed in the Crawford boxes. Although Marwin Gonzalez answered with a long ball of his own in the bottom of the seventh that made it a 4-1 game, Houston never got any closer.

"It's hard. It's always hard," said Verlander, who's been to the playoffs seven times in 14 years and owns one World Series ring. "We had a good season. Didn't end up where we wanted. We lost to a great team. I said it last year: Playoffs, it's flip a coin sometimes. It's whoever's playing the best baseball at the time. We were dealing with a ton of injuries, as you could tell, but the guys battled, and I feel like we gave them a good fight. It just wasn't enough at the end. They played great baseball."

After winning the series opener at Fenway Park, the Astros lost four straight to the Red Sox. According to ESPN Stats & Info, they're the first team to drop three consecutive home games in a league championship series since the Angels fell three times in a row to the White Sox in 2005.

"It sucks," said Houston manager A.J. Hinch. "This is a press conference you never really prepare for. I don't know the right words, the right tone, the right content. I mean, it's an extremely disappointed clubhouse because we want to keep playing. We feel like we set the bar exactly where it should be around here, which -- the World Series is the only thing that was going to make this team feel like we accomplished much."

"It's always disappointing to lose," added outfielder George Springer. "It's a tough pill to swallow, but sometimes you have to give credit to the other guys and understand that they got the big hit in the big situation, made the big pitch, made a big play. That's the game. You put it behind you, let it soak in for a few days, and you're on to next year already."