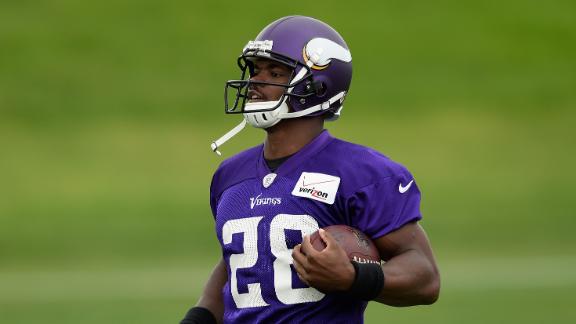 MANKATO, Minn. -- The "AP! AP!" chants started as soon as Adrian Peterson was in full view of the fans at Minnesota State University.

As Peterson worked his way down a row of autograph seekers before checking in at Minnesota Vikings training camp, one fan held up a sign that read, "Welcome home AP; real Vikings fans still love you."

The latest step in the 2012 NFL MVP's reintroduction to the league came and went without a hitch Saturday as Peterson joined his teammates for the start of training camp.

While the several hundred fans who congregated inches away from Peterson were probably among the Vikings' more fervent supporters, they at least helped reinforce the idea that the star running back would be welcomed back in Minnesota following last year's suspension and his 8 -month absence from the team.

"It's definitely a good feeling to know that people do have your back," Peterson said. "But I'm sure it will take a while for this [last year] to get erased out of my memory."

The Vikings and Peterson agreed on a restructured contract earlier this week, seemingly closing a period of uncertainty that began with the running back's indictment on child injury charges last September and continued when he voiced concerns about continuing his career in Minnesota following his NFL suspension.

But Peterson said he was happy to be back in Minnesota, adding, "If that wasn't the case, I would have just played this year out, and not tried to redo a contract."

He reiterated Saturday that he'd gone through a point where he didn't know if he wanted to return to the Vikings.

"I did a lot of praying," Peterson said. "With time, I was able to sit back and think about things and smooth things out."

The 30-year-old Peterson now will begin his ninth training camp with the Vikings, after playing just one game last year.

Coach Mike Zimmer has said the Vikings likely won't use Peterson in the preseason. While Zimmer wants to add more inside run drills to practices in an effort to shore up the league's 25th-ranked run defense, he added the Vikings will be careful with Peterson.

"I'll probably have to hold him back moreso than push him," Zimmer said.

Wide receiver Mike Wallace, who went through a four-hour workout with Peterson in the Houston heat earlier this month, said he has no doubt about Peterson's conditioning.

"It was one of the hardest workouts I've ever been through," Wallace said. "It's not even the things he does, it's the way he does it -- the tempo he does it at. He's always first. He's trying to win every single time, racing up those hills. His endurance is crazy. He's a leader. He's a great guy, great worker."

While he said it hurt not to be on the field with his teammates last year, Peterson admitted he enjoyed a break from football, which gave him more time to be with wife Ashley and his children.

Now that he's back, however, Peterson said he's mentally stronger than he's ever been.

"I've got a different mindset when it comes to life in general and football, too," he said. "I know that's going to make me a better player."

The Vikings sounded grateful their period of unrest with Peterson had come to a close.

"The way I would describe it is, you become callous to a lot of things," general manager Rick Spielman said. "You go through it, and you just continue to work through the things. I think resiliency would be a good way to describe getting through everything, knowing in the end what is right -- what is right for Adrian and what's right for the organization. I think everybody's looking forward to moving on."