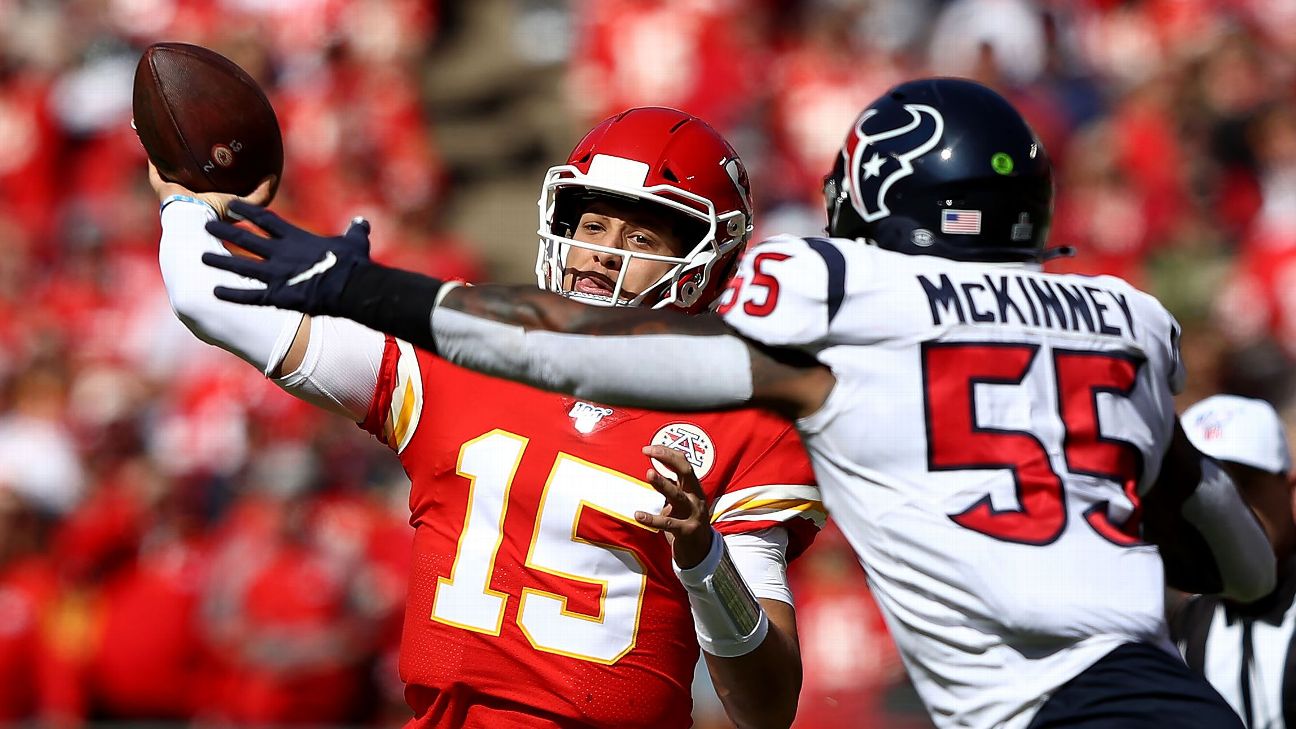 The AFC divisional round is set for the 2019 NFL playoffs. For the first time since 2009, it won't include the New England Patriots.

The Tennessee Titans, having knocked off the Patriots on Saturday at Gillette Stadium, next have a more difficult task: traveling to Baltimore to take on the top-seeded Ravens. The Houston Texans, meanwhile, get a rematch with the Kansas City Chiefs at Arrowhead Stadium.

Here's a first look at the games, with the NFC wild-card matchups set to take place on Sunday:

What to watch for: An old-fashioned run fest. The Ravens (3,296) and Titans (2,223) finished the season ranked No. 1 and No. 3 in rushing yards, respectively. We know what they like to do. The Ravens want quarterback Lamar Jackson to do his thing with read options and designed runs. The Titans like to use running back Derrick Henry, the league's leading rusher, to wear down opponents. No secrets there.

How the Titans win: They must withstand the Ravens' typical early onslaught. During the regular season, the Ravens had the NFL's best first-quarter point margin (plus-97). The Titans can't fall behind early if they intend to ride Henry in the second half. If they can reverse the Ravens' trends -- and be in a position where they don't need to pass to catch up on the scoreboard -- the Titans will have a chance for a big upset.

How the Ravens win: It's likely that they can win using their usual formula. Jackson threw eight touchdown passes in the first quarter of games this season, tied for fourth most in the NFL, which helped his team get out to big leads. If the Ravens can do that, Jackson & Co. are good enough from a personnel standpoint to roll from there.

X factor: Titans quarterback Ryan Tannehill. We know the Titans are going to ride Henry, but at some point they will -- like all teams -- need a play or two from their quarterback to advance to the AFC Championship Game. Tannehill was one of the NFL's top five quarterbacks in the second half of the season, making tough and accurate throws with regularity, but the postseason is an entirely different animal. He converted some big third downs on Saturday against the Patriots, both through the air and on the ground, but he also dropped the snap on a crucial failed third-down play.

What to watch for:What seems like many moons ago, we saw the Texans go into Arrowhead Stadium and take it to the Chiefs in Week 6. Quarterback Patrick Mahomes was hobbled by an ankle injury then, but the Texans will go to Kansas City knowing that they have done this before.

How the Texans win: They'll need quarterback Deshaun Watson to produce a repeat of his Week 6 performance. In that game, he ran for two touchdowns and threw for a third. The Chiefs gave up 5.0 yards per rush to quarterbacks this season, which ranked 25th in the NFL. There is an opening for Watson to do significant damage on the ground if he is up to it.

How the Chiefs win: Ride Mahomes against a Texans defense that has at times been gashed by the pass. Houston gave up 33 touchdown passes this season, tied for fourth most in the NFL, and opposing quarterbacks compiled a 60.8 QBR against them, sixth highest in the NFL. It sounds simple, but things set up perfectly for the Chiefs to win with their QB -- even with the return of Texans defensive end J.J. Watt.

X factor: Chiefs safety Tyrann Mathieu. A season-ending knee injury to fellow safety Juan Thornhill will put extra pressure on Mathieu, who was named last week to the All-Pro team. Mathieu will play the mental battle against Watson all game. Can he cause a turnover and/or take away the middle of the field from receivers DeAndre Hopkins and Kenny Stills? 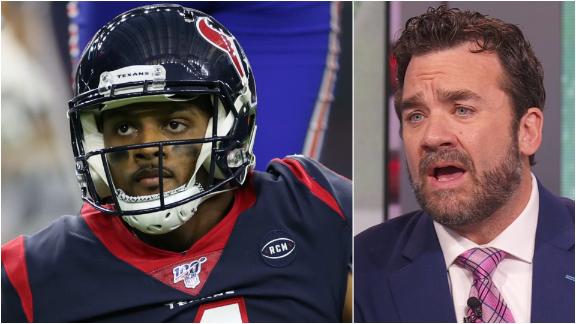 Saturday: Texans have their work cut out for them vs. Chiefs
Jeff Saturday believes Deshaun Watson and Texans will have their hands full with the pressure the Chiefs' defense will bring in their playoff matchup. 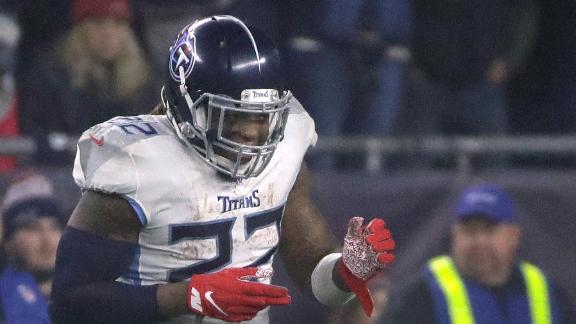 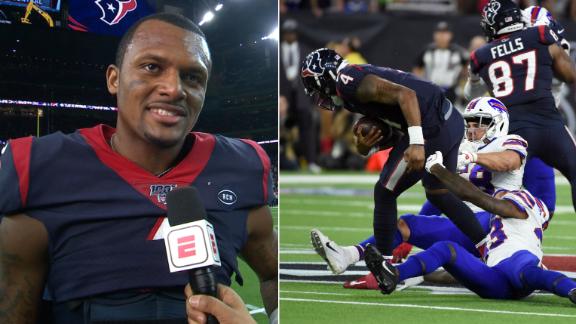 Watson on avoiding sack: 'Somebody had to be great, why not me'
Deshaun Watson knew that he and the Texans were in a "do-or-die" situation and credits his teammates for never giving up.
Report a correction or typo
Related topics:
sportsespnpreviewpostseasonhouston texansprimerbaltimore ravensplayoff picture2019schedulenfl playofftennessee titans2019 seasonnflbracketkansas city chiefssuper bowl
Copyright © 2022 ESPN Internet Ventures. All rights reserved.
TOP STORIES
Wanted suspect identified in constable corporal's ambush murder
Sergeant was to walk daughter down aisle until his hit-and-run death
Grab the umbrella! Widespread showers move in Monday
'We knew something big exploded': ABC13 recalls moment of Watson blast
2 adults killed and 12-year-old hurt in crash with speeding tow truck
Dad charged and fired from job after racist tirade posted on TikTok
Bad Bunny announces stadium tour stop at Minute Maid Park
Show More
5 tax changes that can boost your refund this year
Getting paid on Venmo or Cash App? New tax rule might apply to you
Tax filing season starts Monday. What to expect for 2022
Texas agriculture commissioner suing to stop aid for Black farmers
Kohl's, target of activist investors, gets a buyout offer
More TOP STORIES News